Is there a DXF/DWG of a plywood sled with the mounting holes for the Rigid Router and the Triangulation Kit from Logan mounting holes? I’d like to send something to my commercial CNC router guy. He can cut a complete sled with holes for the Rigid router and the pantograph hole pattern. I can have a couple cut and send to anyone who has a DWG/DXF file. I have a kit on order and am pre-building some components. I will likely have the router cut from Birch ply or Marine (BS1088) ply.
Thanks!
Dan

I believe this is on a to-do list. I asked about it before. Give me a few minutes to see what I can come up with. I just pulled up the template -

but that won’t do it. Seeing I need one too. I’ll take a crack at modifying the Sled file from the assembly section.

This is not my strong suite. I’ll do my best. I’ll check back shortly.

check the topic for the 45 kit, I believe that Logan has posted a svg with
everything you need.

I’ve gone threw it and there is a Onshape hosted file that is read only. You can see it but not download it.

The other is the oval design but Logan had questions about it not haveing the corrct mounting locations. I’m puttsing in corel draw right now, May be 60% complete.

This shoud be accurate to Logans Drill guide. We will call this v1 - I am next attempting to add the router mounting holes. Not the smallest features are 3/16.

ok I think this is it. I grabbed the holes from the oval rig in the wood kit thread. Don’t shoot me if it’s off. I added alignment marks and centered my holes on the marks for the linkage in Corel Draw it might be a bit fuged but I think it will all line up.

Can you look this over and give it a thumbs up , down or nudge it?

If you’re interested - this one has 2 more features a 2 inch sight hole to the right and a pencil hole at the bottom for doing test cuts by drawing with a pencil first. Note the pencil drawing of the cut will be offset by the distance of the hole from the cemter of the sled.

There’s definitely something fishy about the first two sled files you posted. I didn’t check the third one yet (with the bonus stuff).

This is what I’m seeing in “Sled_wWood_kit_holes.zip”: 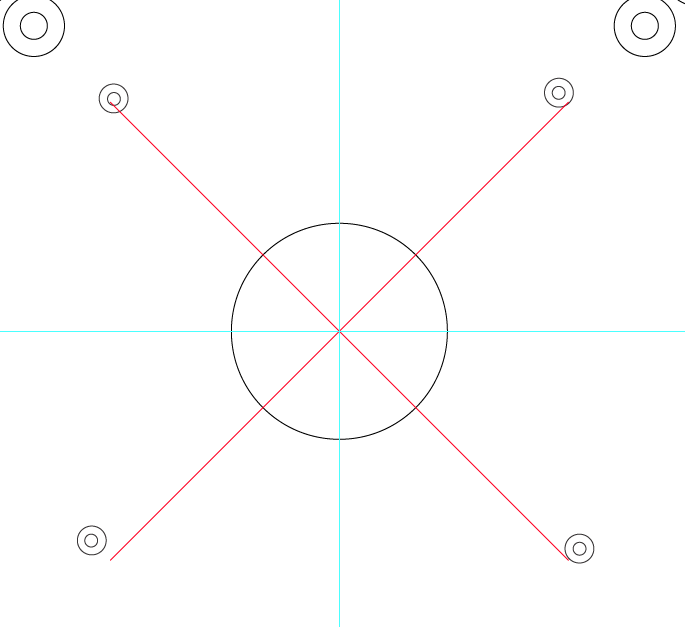 BrandonsSled1.png685×627 8.17 KB
The red (and blue) lines are mine. The red lines are exactly 9" long, exactly 45˚, and exactly centered with the sled (and the center hole). As you can see the mounting points are a little wonky. And it’s not just shifted, they just aren’t lined up. 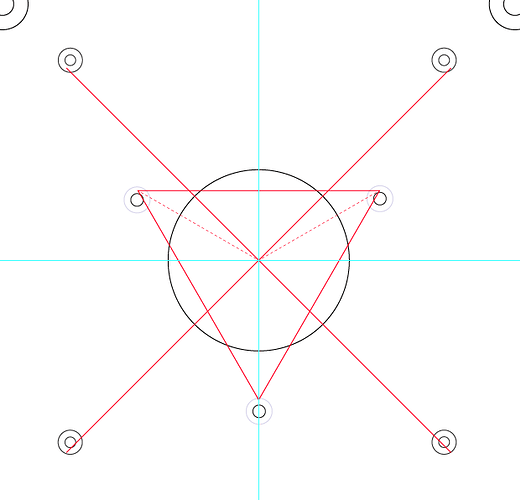 BrandonsSled2.png621×596 15.7 KB
Again, red (and blue) lines are mine. Same deal with the 9" X, it’s centered with the sled but the mounting holes are not lined up (and they are different from the previous file). The red triangle is a 4" equilateral triangle that is centered on the sled. (this is based on information from @blurfl regarding the Ridgid router) The dashed red lines are all the same length (there’s one going straight down as well but it’s hidden by the blue guide line) and they are there only to prove that the triangle is centered. While the mounting holes for the router are sorta’ close they are not right, and they don’t appear to even be equilateral (the top two holes are not on a horizontal line).

So I don’t know what exactly is going on but things don’t look quite right to me. I would be happy to make a file with some precise measurements but I don’t think I’ll get a chance before Christmas. I might try, but I can’t promise anything before then.
Thanks for all the hard work everyone is putting in to this!
-Logan

So this is using corel draw 7x. I took the original Sled.SVG I then made a 9 inch circle based on the PDF supplied as a drill guide and centered it. Based on that I put the 4 points on at 45’s. If I make a 4.5 inch square it didn’t seem to fit correctly. It put the mount between the standard mounting holes. Also if I rotated a 9 inch square it came back as a 7.75 inch measurement. So I tried adding vertical and horizontal guide lines and aligning to them. I suspect an issue with 7X because I used to make I pod faces in 3 with my laser that lined up with the features there perfectly but that was .cdr format too. Also I question the direction of the router, do you want the exit facing up or down. Corel draw is all I have to do 2D at the moment. What are you using? 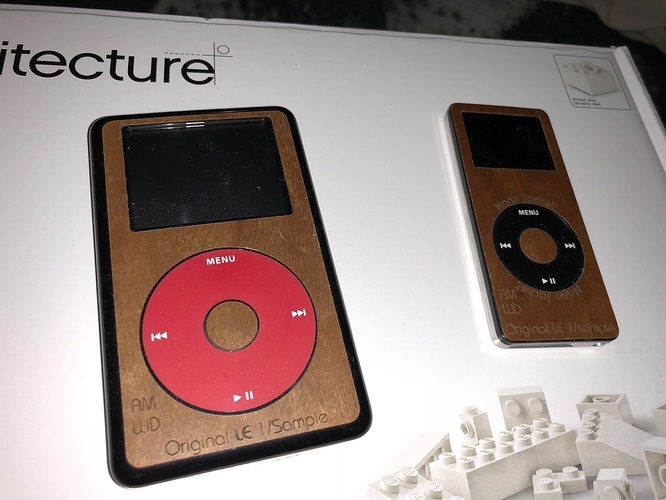 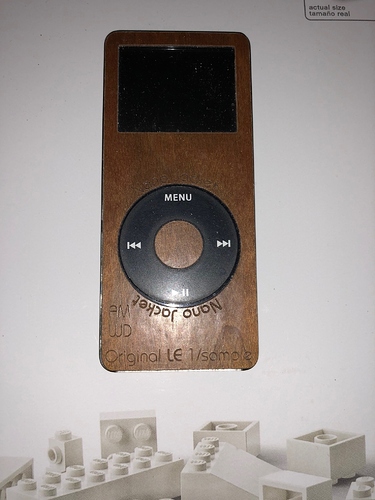 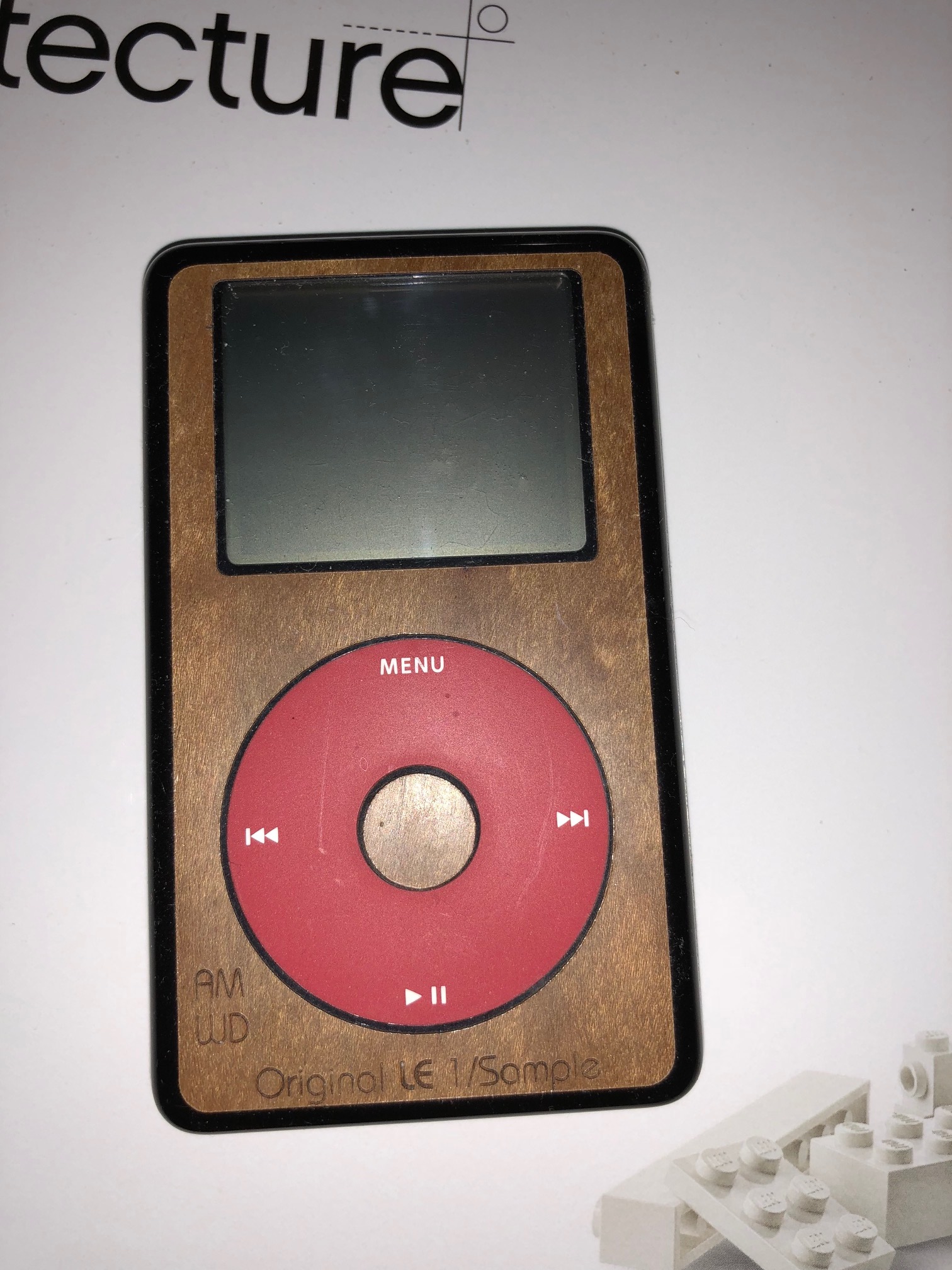 I’ve been working on a sled for the triangular linkage tests that has mounting holes for each of the setups: http://a360.co/2jXD7y0

I went through and deleted all the holes you don’t need and saved it in a dxf format:
45LinkageSled.zip (834.4 KB)

I’m unable to get the sled to display/render in inkscape’s, or anything else that can print. It’s the only one of the design svg files that has this problem. Everything’s there, nicely done with circles instead of line segments, but a couple versions of Inkscape just don’t like it. I wanted to make a quick copy of the permanent sled by printing the design, gluing it to some scrap plywood, and making it with conventional hand and power tools before doing a full recalibration. It’s probably so…

Based on this I may have to ditch using SVG files. That is, it is a vector format and rendered meaning it’s set up for information display not accuracy and across systems how your computer renders it can play havoc with what’s going on. I should have noticed that CorelDraw states - it has a layover .png file. This is my first time using .SVG . I may need to default to .DFX only on the Maslow. What this means to me is if I’m drawing a outline of a moon with a wolf, relative size may not be an issue and I can cut based on that. If I’m making a tabbed box between two computers the tabs may not work. This is not a fault of the design of the file. It is a possible miss-use of the file type. It is explained as a XML format for displaying information from the web. SVG stands for Scalable Vector Graphics. It was expressly created to render low resolution information scaled it to your display. So the accuracy between a 640x480 display and 4k display could cause a huge accuracy error. The SVG specification is an open standard developed by the World Wide Web Consortium since 1999. For dimensional accuracy I will default to CAD files. It’s funny in no way was this what I set out to do today. You never know what you will learn.

I will reach out to my CAD guru to see if I can have a file made for the sled. My 2D skills end at CorelDraw. I loaded up Qcad from the software page and feed it the sled SVG after a few minutes it said it had to close. I will scratch that off the list of applications I will use.

These are my observations.

That drawing of the setups is sick. Keep up the great work.

Thanks for all the work guys! I do use QCAD and it’s been importing the SVG’s OK for me. I like the options Bee has put in the base and it looks like MeticuluosMaynard’s “45LinkageSled.dxf” has the geometry that will work. I’ll email the 45Linkage file to my CNC guy and have him cut 3-4. I can send one to Bee and Maynard if you want them…just email me directly and we’ll go from there. My cutter guy also uses Starboard for my boat stuff (it’s an HPDE plastic). I wonder if that would work, as well? In any case, I’m leaving for Florida for a couple of months starting 12/29. I’m HOPING the cutter can get them done before I leave. I’ll advise.
Dan

Thanks for the offer, but I’m going to be cutting the parts shown in the Fusion 360 model I posted previously. Because I’m testing each of the triangular systems I drew up a sled that has all the needed mounting holes. The DXF I posted only has the mounting holes for the Rigid router base and the 45 linkage system, so it will not have enough holes for my needs. I’m going for Swiss cheese!

Funny you should mention the Starboard. I’ve seen a few sleds in the forums that have a HDPE “pad” to reduce friction between the workpiece and the sled. From what I hear, it works quite well. I ordered a 1/4" sheet myself that will mount to the bottom of the sled. You can see it in my Fusion 360 model.

Make sure your guy knows that the dxf file is in centimeters. I didn’t realize that until I just checked it again. I usually draw everything in mm but for some reason Fusion decided to export the file using cm.

I threw a couple of dimension lines in. Can you give it a quick once over? I’m using the Rigid router so I should be good. I’m using QCad and the cutter is able to post the stuff I send him…I believe it just imports dimensionally whatever the native drawing used (cm should be no problem).

It’s a bit messy, but I dimensioned everything out. Everything is where it should be. The linkage holes are 4.5" from the centerpoint of the sled, which matches @pillageTHENburn’s template. The router base holes are taken from the model I made for my current sled, so I know they work. The holes are drawn at 1/8", I forget the size of the screws but they could easily be widened to the correct diameter.

The only thing I didn’t like was the hole size for the linkage mounting bolts. I think I had drawn them for 1/4"-20 bolts, but the kit uses 10-24. I tightened up the clearances on those holes and their counterbores.

I updated the DXF I previously posted to avoid confusion. I’ve also included it at the bottom of the post.

It’s always a good idea to triple-check everything before sending it to the machine. 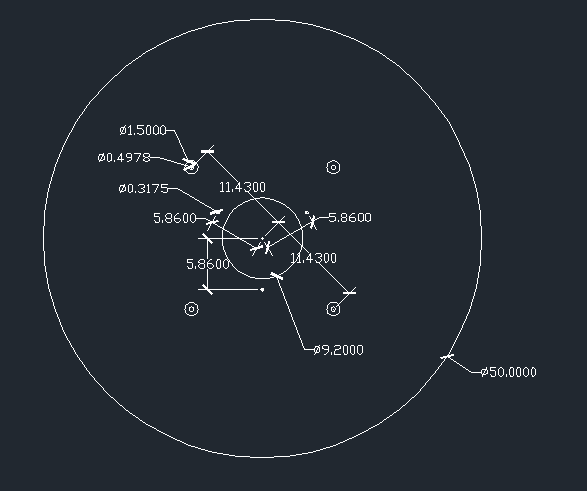 My 2D skills end at CorelDraw.

After dealing with SVG headaches with Corel (logo, not CNC), I switched to Inkscape and I love it.
It’s free & open source: Draw Freely | Inkscape

Sorry to have you do that. I had marked up your earlier drawing with dimensions but the forum wouldn’t let me up load it for you to look at!

No worries! It took me but a minute. I was able to catch the issue with the hole size, which I would have felt bad about

For What it’s worth - I zipped the files to make them easy to DL and forum friendly.