There are 4 laser cut holes for 5mm screws to secure it to the sled. It doesn’t need additional bracing. The aluminum is only 8" long, hard to get much flex out of something so short.

Yeah, it may be confusing if you only tuned in to see the white melamine board. My actual sled looks like this post above.

The black part is Metal Maslow’s 1/4 inch steel sled. I highly recommend it. The accuracy of the holes solves a lot of issues and this is something that should last forever (as opposed to a wooden sled).

The white melamine I cut above is mounted under this sled as a low friction skid surface that rides across the work surface.

I’ve ordered a bit oversized aluminium angles because i wanted the z-motor down to keep the centre of gravity on Z low. Just needed to drill holes for the screws in the t-slots. Almost no flex, however a 500W spindle is much lighter than a router. The 8mm acrylic dust protector for the tooth-belt provides additional support. post

I forgot to mention if you seal up the top 4" hole with clear plexiglass then you will almost dead head the vacuum and if strong enough will stick the sled on the wasteboard.

the solution is to let air in through more air channels maybe around 12 oclock so the flow is straight to the bottom.

around 12 oclock so the flow is straight to the bottom.

That was my thought as well.

did you already test this z-axis setup?

Oh yeah, this is what I have been using for a few weeks. I cut a lot of simple things, nothing all that fancy yet. But it works perfectly. As I said, much faster in moving, with a little trade off on about .2mm of backlash in the motor.

I also made and attached this dust window that helped a TON. Little if any sawdust comes out now for normal cuts. 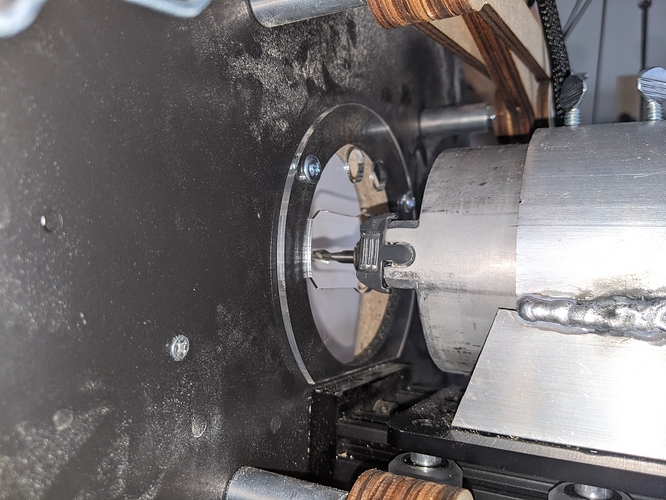 just to be clear the backlash is in the original z motor and 3x gearing.
the metal maslow kits have a faster more expensive z motor that doesn’t’ require the 3x gear and thus doesn’t’ have back lash issues.

The stock maslow Z axis has bad backlash problems, that’s why we put a bungee
over the top, it holds the router against one side of the threaded rod to
eliminate the backlash, you could do the same thing with a C-beam setup.

the back lash is from the old slow z axis motor and 60t to 20t gearing, which connects to the cbeam lead screw.

The cbeam already has a anti backlash nut on the lead screw so a bungee would not help.

and you think the motor you are attaching to that lead screw doesn’t have gears?
and the belt doesn’t have any give? there is backlash in the system.

correct there is back lash using both the old slow motor and the new faster z motor. the faster Z motor has less backlash to the point of being inconsequential from my experience.

@Metalmaslow I have the C-beam Z axis with the original maslow Z motor. I’m going to purchase the upgraded motor today. Is there much benefit in getting the updated Z Axis? https://www.metalmaslow.com/product/200mm-lead-screw-lead-axis-kit-orange-router-blue-ring-and-z-axis-motor-not-included

Will the C-Beam that I got from you guys with the first metal maslow sled be as fast as the new Z axis with that motor?

What pitch should I go for on the lead screw?

I’d like to reuse the existing z motor for now. I know I have some adjustments I can make later with the gears on top, but it seems like 2mm pitch vs 4 and 8 is the big decision that has to be made first.

8mm pitch is best if using the old motor. Use a 2x or 3x gear ratio if you want even more speed.

And when I upgrade to the metalmaslow new and improved z axis motor…will it be too much pitch?

one can adjust the encoder settings in the software which will basically speed up or down the motor so even 8 pitch will work. but to be honest many people use the old motor just fine. switching to a c beam or other dedicated z axis reduces the stress on the small original motor so it works better compared to the ridgid z axis hack. the new z motor has same connector as the x/y motors and IMHO is a much more secure connection. Keep on reading about the z axis connection being flaky with the old motor.

It does sound like many are having cabling issues or even shield-arduino connection issues though I don’t know if that is just the connector on the motor end of that cable. I have one of each z motor now (metal maslow high speed z and a makermade jumpstart sled and z axis) and once dialed in, they both work quite well. The newer motor was a challenge to get set up correctly, but works quite well. The older motor with the 3:1 gearing and an 8 mm lead screw for a -24 pitch is awesome fast compared to the basic 3.17 pitch of the rigid or Ryobi that I was originally using.