Do you recommend another round of calibration after installing the newly cut sled?

I tried to re-run the calibration and had a “connection lost” error while doing the test cuts. It took me a while to figure it out, since the running display of gcode typically shown in GC is hidden during calibration (I’m running Windows 10 on a laptop). I’d like to request that this lost connection information be displayed on the screen during calibration, so that folks unfamiliar with how the test cuts run don’t sit and wait too long for the sled to start moving again.

Also, if you stop the test cut and then request for it to restart, it didn’t appear that GC took into account the last known location of the sled. It looks like it just assumes that the sled is repositioned at center. If this is the expected state (even if you’re selecting the “restart the test cut” option), could you add a return to center button on this page? I know I can quit out of the calibration process and use the “return to center” action, but as a newbie, I’m worried that I’m leaving things in a really weird state each time I quit the calibration routine.

I just did a quick check.

Here is a program that watches and displays information for serial ports in Windows.

I saw some paid apps but this looks like it would get it done. When I get near a Windows PC I’ll try to testing it. I’m in a Linux meet ATM.

I suggest 2 things. 1 Use Pause not stop. There is issues with stop not resuming for some folks. 2nd always manually position the sled and use Define Home as a Work flow.

Edit - If the connection points of the new sled are the same size/location you shouldn’t have to recalibrate other wise - yes recalibrate.

I think we fixed the issues with the stop button not resuming all the way back in like 1.03 or something like that, but I will look into what was going on there. I will make sure a popup comes up if the USB connection connection is lost at any point during the calibration process.

To both of you – thanks for your responses (& on the weekend!) My hat’s off to this amazing company and community for their responsiveness.

And that Calibration Test Cut screen (I’m using 1.11 for both GC and FW) doesn’t have a Pause button, maybe it could? I’m including a screen shot so you don’t have to compromise your .ini by stepping through the Calibration routine & quitting. 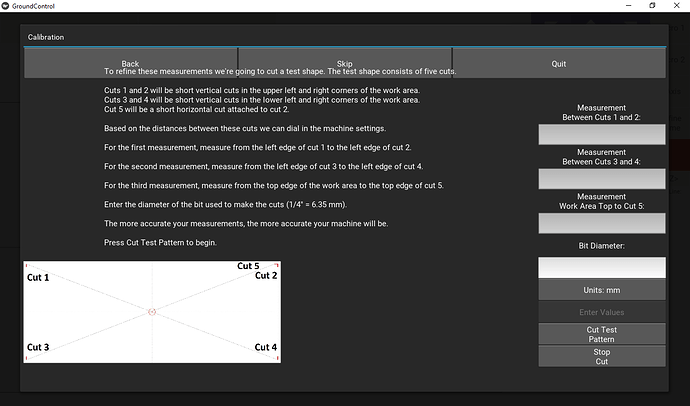 @bar
Also, the command line window that is open (but eclipsed by GC on my little laptop screen) does show the message “Connection Timed Out” when the error occurs, so if I had been watching both GC and the command window, I would have caught on immediately. So it’s my bad. But a popup would be great for me and others with limited screen space.

it’s a good idea, the calibration includes figuring out chain sag, which will
change as the weight of the sled changes.