Is the automatic calibration procedure valid for a non standard working area.
I made my structure with 1250x1250 and when I press the move to center button the sled raises to a position lower than the center. It is centered sideways. Chain length measure is about what I was expecting. 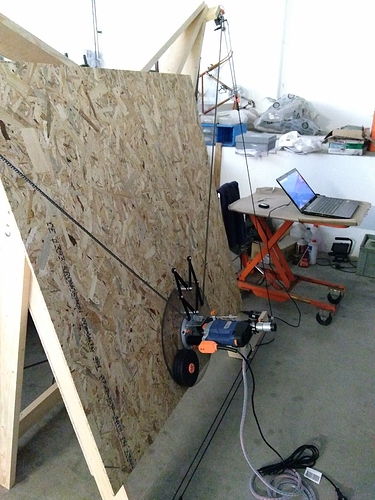 What did you use for you guess as to the rotational radius?

Regarding the distance between motors I have on my 3D project 2163.6 mm and the calibration process measured 2174.8. So I don’t think this is it.
Distance from top of workplace is 297.6 on the 3D project and I measured 300 mm. I also don’t think this is the cause.
The linkage arms were designed by me with 125 mm instead of 150 mm as in dlang design in which I was based.
I also remeasured work space today.

In fact there is a huge distance between the center and the position in which the sled stoped: about 250 mm.

The thing is these are not standard motors and in the specs there was no information about pulses/rev So probably I have something wrong in the encoder steps per final shaft revolution calculation.

Worst part of all is that , contrary to what I said initially the sled is not centered. On a second calibration with v1.11 firmware, when positioning the chains, right chain was much shorter than left chain which leads me to believe that either the encoders are not the same or the right encoder is loosing steps.

I think I will take some linear measurements using the extend chain command on the measuring chain menu.

Is there a way of extending the right motor chain a certain linear distance without swapping the cables?

I’m testing the motors counting 5ºx72 increments which is not easy. What I see is that after 3 or 4 turns there is a difference but how much? this leads me to 2 suggestions:

It would be interesting to have testing buttons to extend the chain a given (long) distance. It would be easy to attach a pen to the chain tip and make marks on a paper This would test the whole mechanical and encoder configuration namely number of teeth/radius of sprocket, chain pitch, steps per rev.

Inverting the reasoning, would it make sense to calibrate teeth/radius of sprocket, chain pitch, steps per rev all at once using a known distance on the board?

look at the ‘B’ commands, they include the ability to run a motor an arbitrary
distance.

We found that the stock motors were not the gear ratio they were speced at by
someone using this to run 50 turns and find that they were off a lot.

This is fixed. I just misinterpreted the instructions related with the adjust chain step and took the picture of the right motor as the left motor. Actually I thought the procedure was the same for both motors.