Note in this example the rope is looped four times between the pulleys. This will result in a 4-to-1 ratio effort reduction.

What does this mean?
It will take 4 times less effort to lift the weight. If you pull in 4 meters of rope, the weight will have only travelled 1 meter. So you basically sacrifice length or rope for effort required and vice versa.

How is this useful?
Using a pulley system with a 4 times heavier weight than normal you will have the same functionality as using a single rope without pulley system. The benefit of a pulley system is that you can store 4 times the amount of bungee cord in the same area. This four times longer bungee cord is more evenly and less extremely stretched and will last longer / will have a more consistent pulling force. If you are using counterweights instead of a bungee cord, the benefit of using pulleys is that it reduces the vertical travel of a counterweight by a factor four.

Note that at least one of the pulleys will need to come with a ‘becket’. Having a becket on the second pulley is ‘nice to have’ as it keeps parts interchangeable and does not negatively impact the setup. Using a pulley that can freely rotate along its mounting point is preferred when using an (angled) Maslow frame with vertical counterweights. 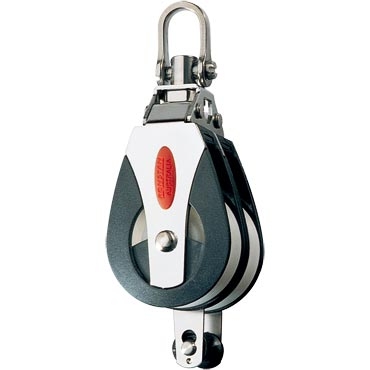 Using thicker rope over thinner rope will result in less friction and less wear on the rollers.

If you are going with bungee cord why would you use a weight?

I am currently using a counter weight system. I chose his because I wanted constant force but I also use a pulley system to shorten the travel of the weight. Right now I’m using 2 2 gal water jugs, but they are falling apart in a hurry so I’ll be upgrading to something with bricks in the next few days.

If you have the chain doubled back on itself, you have little enough travel of the line (<5’) that I question what the value is of reducing it further? while you can then use heavier weights and have them move less, what is the advantage of just letting the weights move 5’ and not doubling things up?

Steven_Sizelove used one in his frame as described under “advanced frame design”. post number 15 of 55. He used a “Stansport Heavy Duty Pulley Hoist”. Not sure how to link directly to his post.