Duplicating objects on a panel

I can’t imagine I’m the only one who wants to do this, but Google implies that it’s not a common thing that people write about or ask about.

Let’s say I have an object that gives me a nice G-code file. I can run this on Maslow and cut one out. Is there a program that takes a G-code file as input, together with the size of a panel and produces a new G-code file containing many copies of the original file filling the panel?

Bonus points for a program that can take several G-code files and allow me to specify how many copies of each to fit into the panel.

Its not gcode, but perhaps https://deepnest.io would work for you? it takes svg, dxf, and cdr files. and can output in dxf or svg for you to send to your cam program. to make duplicate items, there is a “quantity” setting in the app.

There are a few issues with doing this all in one go on the maslow that you should be aware of though:
The first is that it will take quite a long time to cut a full sheet of small parts with the maslow. (days, possibly)
The second is that the “go to line” function of ground control is kind of flakey and will not set your Z height correctly most of the time, so if there is an error, you might get stuck and have to start from the beginning again.
And the third is that because of the chain sag in certain areas of the sheet, you will have errors in the corners/top of your sheet if you attempt to cut across the entire sheet. I mitigate this by moving the sheet so that I am always cutting in the middle of the workspace, but if you have it set up to cover the entire sheet and are cutting it all at once, you wont be able to do that.

I don’t know of one. There are some major issues with this. If I have a 4x8 foot sheet and I want to get as many 3 inch circles as possible from it there is maximization pattern matching software to get that done. But if I want to take a full size sleigh that only one fits on a 4x8 and make 15 on a giant sheet. Can you guess what the Maslow would do if you run the file? It would destroy it’s self. It would attempt to do what it was told. In what orientation do you put 4 copies relative to the original? People have problems zeroing for one part much less orienting and zeroing for copies. There is a reason it doesn’t exist. Liability. Hey you let me make too many lawn snow men and I lost an arm. The scenario I just painted is from a real lawsuit 20 years ago on a diffrent automated system. The software would be relatively simple, getting people to relate to it appropriately would be a big challenge. Big enough to cause damage.

Ok. So the short answer is no.

I can’t see any major issues at all, but I assume there’s no real need for it as it would be just as easy to duplicate the objects in CAD and generate the G-code from that.

I’ll probably stick to moving the router around manually to each start location as suggested, since I can keep the cuts more central and avoid distortion at the edges. 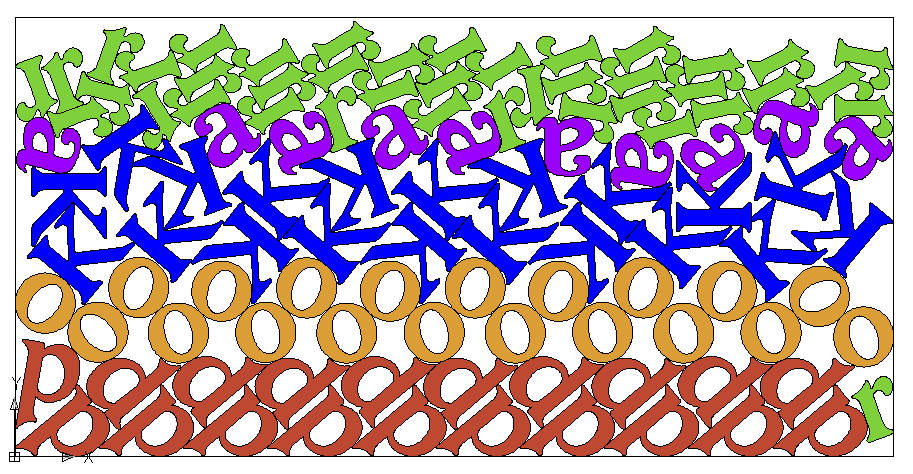 Nesting Software from Sigma Tek to MyNesting.com: An Introduction - CNCCookbook:...

Have you heard of Nesting Software?  It’s one more piece of the CNC Software puzzle, but an important one in terms of minimizing material waste, particularly for large flat pieces of material such as you would put on a CNC Router, CNC Laser Cutter,...

I think this is sorta what you are looking for. It takes a dxf file and fits it as many times possible. Look for CNC nesting software. Several free and paid as well.

CAD is the appropriate answer for this.