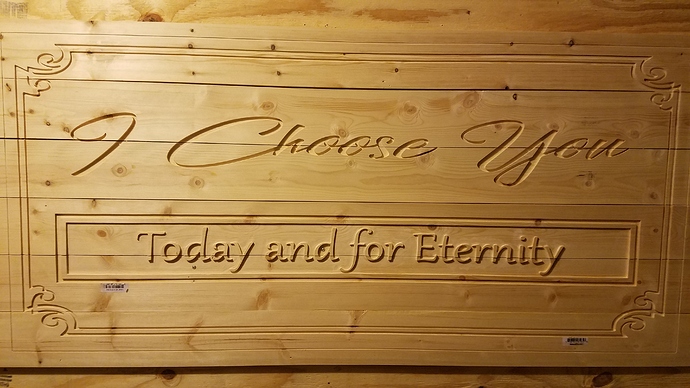 First actual cut. I had a few mishaps, but it ended up turning out better than I would have expected (kind of rushed through the calibration process). First two days of cutting I would not leave the machine’s side. Lucky I didn’t because the motor coupler for the z axis slipped and it started to cut through my project (did not tighted the coupler lock screw onto the the flat part of the motor shaft).

After I realized just how long the cut was going to take I put my daughter’s old baby monitor in the garage to keep an eye on it. I finally understand my wife’s paranoia when my daughter was a new born. " What if something happens while I am not watching, or, even worse, what of I am watching and am not fast enough to save the project?"

Maybe it is just me that is getting ulcers watching a 20 hour plus cut, but I was thinking it would be a good to add a manual switch that would not allow the router to traverse until it reaches the designated traverse height. I have no coding knowledge or I would try it

Also I started to wonder about my utility bill. Has anyone seen a huge jump in utility costs after a 20 plus hour cut.

Thanks for all of your input in advance.

Looks great! Very clean. 20 hours though… thats crazy. Did you use a small bit?

Very nice. Can you give some details about the work piece? Is it pine? How did you put it together?

Also, did you take this picture as a panorama? It appears that the top and bottom cuts are sagging but I think the boards may also look that way so I’m thinking the photo is distorted?

I had to go into the garage and check after your comment. Looks like the picture is distorted for some reason. I think the boards are called white wood. They were the cheapest 1 x 6 x 6 boards I could find at lowes. They cut really clean though. The boards were a little longer than the work area so I just screwed the ends to the waste board. 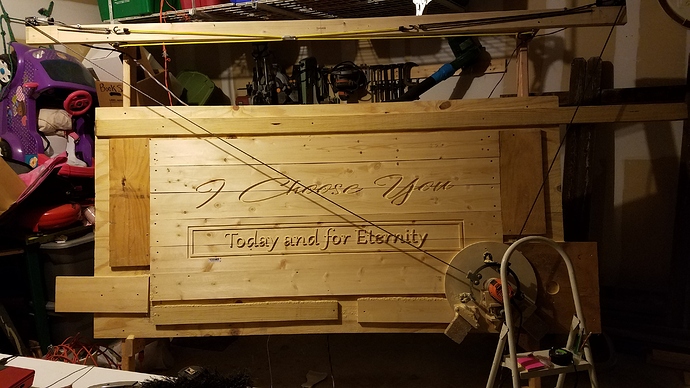 Wow, 20h, looks nice.
In fusion you have an option for to cut the leftovers of a bigger tool. You start off with a big tool, then you just copy paste your toolpath, change the tool to the small bit and activate the option, set the diameter of the first bit and it only cuts the parts the big bit couldn’t reach.
I’m not sure what the option is called, but i’ve tried it in the past and it worked great and saved a lot of cut time.

In fusion you have an option

Yes to all those questions.

Thanks for the fusion 360 suggestion. I will have to check it out. I have also been thinking about making a jig to manually route out large void areas for future projects.

was thinking it would be a good to add a manual switch that would not allow the router to traverse until it reaches the designated traverse height.

This is normal operation, controlled by your gcode generating program of choice. There should be a Z move to raise above the workpiece (controlled by what’s called the safe height, this may include above clamping devices, for example) that completes before any non-cutting positioning (travel) moves.

If you are contacting the surface you’re cutting then something’s broken, like a slipped coupler or tool bit (loose collet, for example), bowed workpiece. Software issues could be a badly set zero (top of board isn’t zero; we’ve all forgotten to properly home the bit

Congrats on your first project! That’s a big one, not the usual tentative small attempt, and it looks great

Free for hobby use unless they’ve changed the rules, and iirc for business use until you reach some level of sales that’s way beyond a retired Moose’s dreams.

Any CAD program has a learning curve. Old moose who started with organic cad (paper, pencil, assorted plastic gadgets) and then went to the software development dark side struggle with CAD, young upstarts who learned AutoCAD in high school (or maybe in elementary school directly from John Walker) pick it up right away…

Thanks. I was talking about a mechanical switch that would be activated when the router gets to traverse height.

I did have the coupler on the z axis motor come loose while i was cutting so the software thought the bit was raised when it was not. I’m probably just paranoid now.

I was talking about a mechanical switch that would be activated when the router gets to traverse height.

It’s not a bad idea. I believe there are some folks at least thinking about an optical or laser height measuring device for the z axis…or it could be wishful thinking.

A mechanical height switch is non-trivial. The safe height for one project could be drastically different for another that has protruding fasteners. The Mazlow’s Z axis is is about as fast as drying paint and setting it extra high all the time isn’t the best choice.

Better to fix the problems permanently than high time commitment band-aids. Otoh it could use some of the time spent waiting for z-doe…

It gets easier. You went for a transoceanic voyage first time out rather than a modest shakedown cruise (and did a great job of pulling it off). Kinda like jumping in rather than gradually upping the pool heater temps (yeah, well, been doing my chemical reactor^^^^^^^^^^^^^^^^pool maintenance) to find where the sudden shocks and blue lips go away