My maslow runs fine with the files that were used to do the permanent frame.

So now it’s time for the first project. The software I use is AutoCAD Inventor.
The file that Maslow wants is a Gcode file. The journey in between is horrible.

Basically, everything I read says export the face to a DXF and then open that in Inkscape.
Then save it as a SVG and open in the Makercam.
Then using Makercam set up your tool paths and save your Gcode.

That many steps is already a pain in the butt, so when they start failing, I wanna say bad words very loud.

Ya know, we also have a Carbide3D Shapeoko it’s software (Carbide Create & Carbide Motion) is so simple compared to the hoops I have to jump to make my Maslow useful.

I tried using that software for generating my Maslow Gcode, but alas, my pattern is too big and extends beyond the Carbide Create workspace.

What to do now. Go thru the trouble of learning new CAD software just so I can use my Maslow?

What kind of designs are you creating? I’m imagining that you are not designing for 3d milling, and rather just for 2d, or 2.5d. If the latter is the case, you can go a simpler route with something like jscut, or you can use software that will import stl files. I am on my phone right now, and I can’t remember if inventor will export svg (I don’t think so).
Personally I have had much better luck with jscut for creating gcode on large scale. I found makercam to clunky to use. When I get home I’ll try to find some time to look into going from inventor to gcode. I usually use autocad for line drawings, but inventor does a fine job of creating dwg files too.

I have the same question as @Keith. Is it a 3D file? If so I’d suggest trying Meshcam.

They have a Trial version that is unrestricted

It is for 3D to tool paths.

you could also try Kitmoto 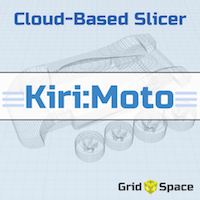 If this is 2D can you pull it into Fusion 360? There are toolpathing options there as well.

I agree that MakerCAM can be frustrating.

You do not need to use the workflow that I follow (OnShape -> Inkscape -> MakerCAM), you can use any CAD/CAM system that you want. If you find a CAM program which doesn’t save files that open and cut right, let me know and I will figure out what is going wrong and make it work on our end. Some folks really like Fusion 360 which is also in the Autodesk world and Fusion just added a Maslow post processor to make exporting gcode to Maslow easier.

I was just looking on Autodesk for the Maslow post processor (on their post site) and a search for “Maslow” turned nothing up. Is the post processor listed under a different name?

I am also curious if the Fusion post would work with their new Powermill software, which should be able to do CAM for Inventor files (or at least STL files).

On this thread, there is a link to the Maslow file. I downloaded the file but have not tried processing with it yet.

Thanks @marm I’ll give that a look. Maybe Autodesk just hasn’t updated their post site yet.

Well I tired jscut and it seemed to be okay, until I tried to select an object (edge) for tool path. The software told me it didn’t support DIV, try Inkscape.

Downloaded the SVG and in inkscape it looked OK, I ungrouped and loaded in makercam.
The outer ring was ok but the inner was an egg.
Would you share the dxf?
I would like to see what bCNC does with it.

Now I should clarify. This is a wheel rim. So actually it is a 3/4" ring of plywood, where the notches are only cut to 3/8".
The intention is to produce two of these and then the 1X2 spokes will be trapped between the two rings, giving the impression of a wagon wheel.

And for those who are curious, this is for a school production, and these are the wheels to a pull cart. 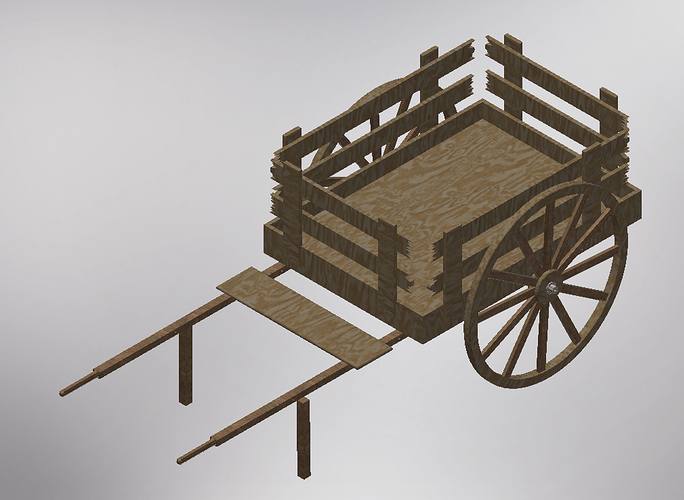 bCNC opens the dxf and would create 2 profiles, 1 outside for the outer ring and 1 inside. 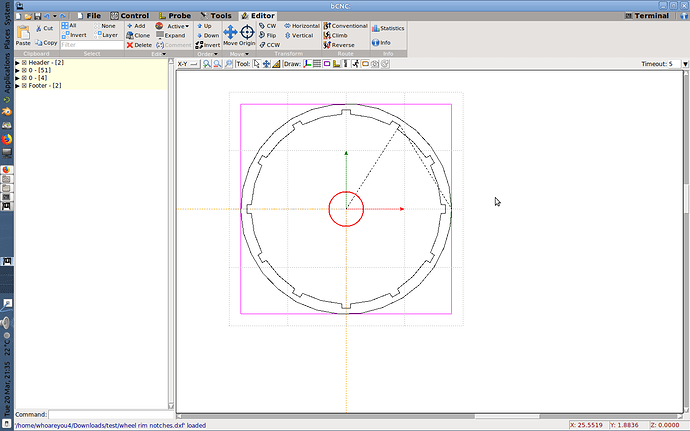 Opening the dxf in QCad and exporting to SVG makes it open in makercam, but the scale is now off 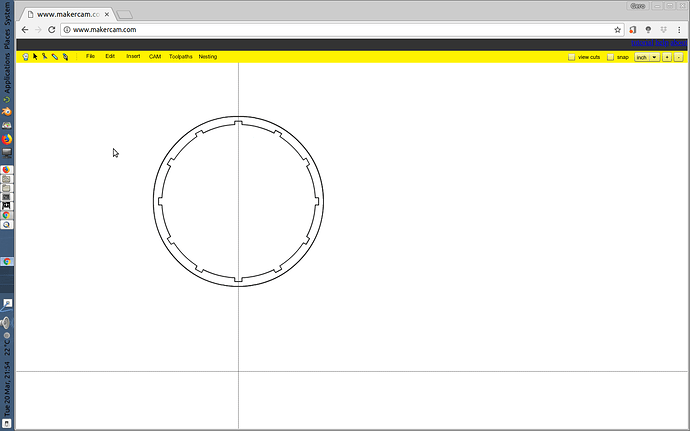 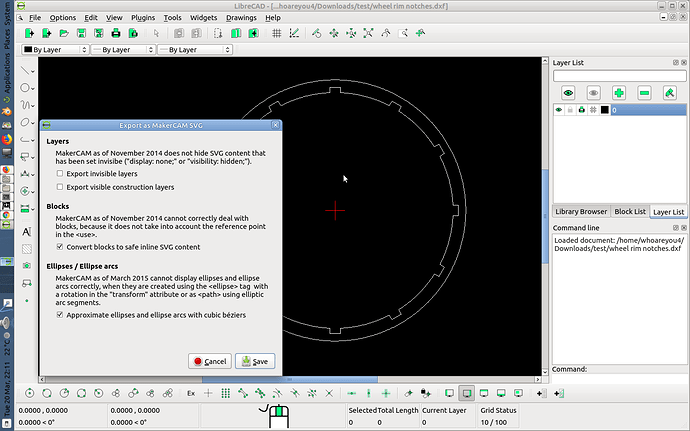 The scale seems still off though. What should the outer diameter be?

And by the way, in Carbide Create it is only the grid that you can max to the size of the shapeoko XXL.
The workpiece can be as big as a ply sheet and Carbide Create will still produce a correct gcode.
Since you can position the parts with coordinates, you don’t need the grid. 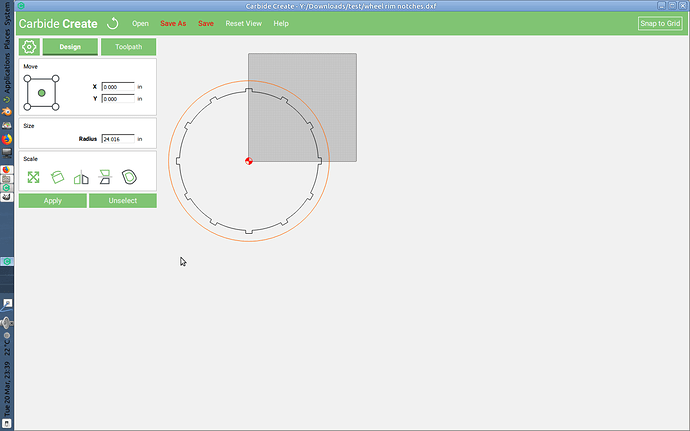 I guess with the centre on X0Y0 this is as bis as you can go on a sheet.

Don’t know if this will help, but I also struggle with 3d CAD software. I still think/design in 2d and I learned autocad long ago, so I have not much interest in learning new things (what is an svg file anyway? I’ve only just learned STL for my 3d prinnter)

So, my workflow goes like this… draw in 2d - save as dxf - take it to ESTLCAM (free trial) and apply my tool paths as I like. I found MakerCAM to not be useful and slightly counterintuitive (I’ve used ART CAM in the past, expensive and more capability than I need) So I have basically settled on ESTLCAM, hope that helps

Okay, this helps. I see now that it only complains about the material (grid) being to big.
But if I disregard, it still allows me to set tool paths to a piece much bigger than the supposed bed size…

This is a step in the right direction.

I’m on the opposite side - I work in 3D and struggle to manipulate 2D. I know it’s a matter of practice. Where are you located?

Yea, I draw and think on paper, extrude if I have to, but I have some amount of experience with 3 axis cnc routers cutting flat stock and a 5 axis machine for trimming thermo-formed parts

From the map - it looks like I’m alone in NY

I do see how this is the way the future will develop - things sure have come a long way in a short time - it wasn’t long ago that mechanical drawing was being taught in school, I’m a little out of touch with youngsters nowadays, so not sure what they teach/offer now

I know there are more of you in NY. I try to find out who can drive over for a beer and how can I do X. However I’m in Los Angeles.

Alright, so we have a snow day today and I have had a chance to look again at some models in Inventor. I had forgotten that I had downloaded and installed the HSM CAM plugin for Inventor, and wow!

So, the learning curve isn’t too steep, given that the tool tips are all pretty well documented. It took me a little while to figure out which operations would work for what I needed, and to make sure I had set up all the depths properly to actually get it to “cut” where I wanted (I haven’t actually implemented the GCode yet), but once I figured out that it doesn’t automagically set cutting depths, things came together quickly.

It is an extremely powerful plugin for Inventor, and with the Maslow post processor, going from a model to G-code is all contained within one program!

That said, there are some nuances that are frustrating me, but should only increase cutting time and not cause other problems.