I’ve just had my kit arrive too. I’m based in Auckland as well.

Still got to get a router. I’m leaning towards the bosch, but was wondering if anyone has looked at CNC spindles specially?

I didn’t bother getting a coupler when I ordered the kit as I wasn’t sure which router I was going to go for. Going to have to grab one before I do the conversion.

I’m in Auckland as well. If you go for the Bosch POF 1200 AE router, I have a spare leadscrew, nut & coupling which I’d be willing to part with if you cover my costs. Still need to fabricate Z-axis adapter and bracket.

Hey @sailorxyz might be a plan, how much are you wanting for them?

The Bosch is a good option, an other option is getting something like the following https://forums.maslowcnc.com/t/z-axis-upgrade-is-almost-ready-for-prime-time/ with a spindle

For folks from New Zealand and in particular, Auckland what about a meet up? There a few of us and I suspect most of us are Maslow newbies but not all. Be good for moral and to compare notes… Any support for the idea?

Could be interested in a catch up, depending on date/time.

Also would be interested it know what bit’s you guys are running or if you’ve found a local supplier? Bunnings and M10 don’t seem to stock anything useful. I see there are a few bit’s available on TradeMe, but I’m not sure if they would be suitable.

I just order from Linbide directly. They have a good range of router bits and are decent quality. See:

Just joined from Wellington, great to see a little community. @Ned your bosch 1200 mod was a life saver.

Just a quick update (for those who care). For various reasons the project hadn’t started for a while, however, we’re onto it now.

We have assembled the electronics and programmed the Arduino. We have a tablet ready for Ground Control, but that has a bit of a pod on right now. We’ll fix it.

The frame is assembled. We’ve made it a little shorter, and we’ve hinged the top edge and hung it off the wall. The cutting area and relationship between that and the top beam are the same as the default frame. Two swing arms prop the frame away from the wall at about 15°.

We have not moved the parts from the temporary sled to the final sled, but everyone is happy that the machine actually works.

Our sled measured 18" horizontally, and was 1/16" short vertically, so that’s pretty good too.

The only problem outstanding is occasional loss of communication. This could get very frustrating very quickly, but for now we were lucky that the machine did not lose its position when it lost communication. 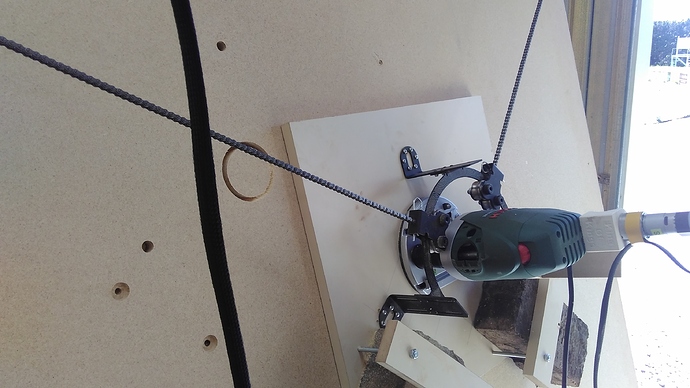 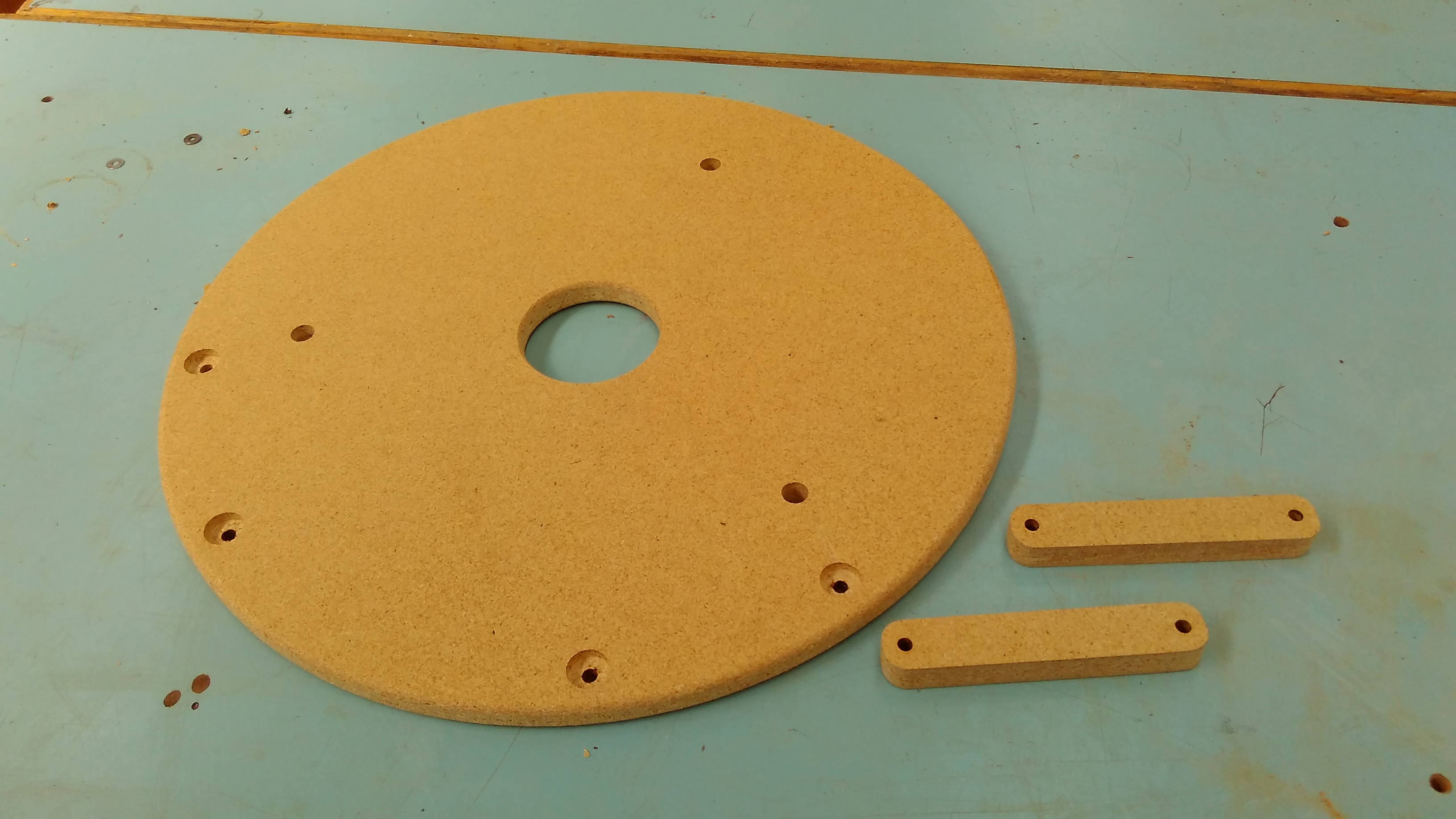 We got it going for real on Saturday. Unfortunately the bug in v1.24 bit us, so the first item I made was a disaster. However, the upgrade to v1.25 fixed that and I ran off three copies of an object at different locations on the panel. All good, and no communication dropouts. Each job was about 20 minutes.

I just received some long router bits from China. They will be long enough to accommodate the extra depth from adding the sled, and are 9.5mm (3/8") cutting diameter. A bit chunky, but correspondingly stronger I hope.

PM me if you’re near Christchurch, New Zealand, and want to take a look.

Have you got a link to the bits you’re using?

We’re not using them yet. They only just arrived and we have yet to evaluate them. 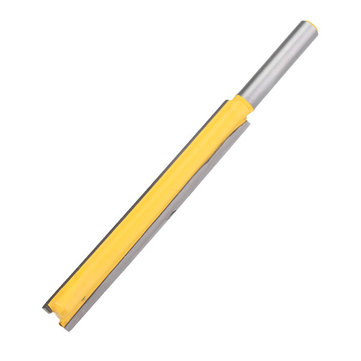 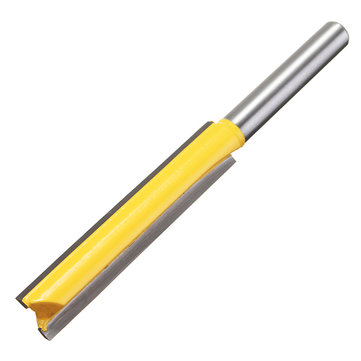 The bit supplied with the Bosch is good, but it’s short, and when you add the thickness of the sled you are not left with much cutting depth. We have a slightly longer 1/4" bit, but it is not fully inserted into the collet as we still needed some length.

Hi all, just joined from Auckland, NZ.
Been thinking to get a kit, but tax and shipping is a little annoying… so have started to cad it up in SLDWKS.
I’d be keen to meet anyone else in Auckland and have a chat, as I’m new to CNC’s (though have built a delta 3DP).
Is anyone aware if there is a SmoothieBoard port of the code?

Also, @Ned, didn’t you work on level 6 in IronBank at some point? I think we met a while ago (via DanW).

that is me indeed!
I am moving to Taupo in January though, and my machine is still in 7 million pieces and on hold some more until i move to Taupo

Haha such a small world.
My 3DP is in a similar state (pending the upgrade to Smoothie board)
Have you had your Maslow running yet? Did you get the ring system? What sort of accuracy in the cuts have you seen?

i am THE worst maslow user in the world i think… problem is at first i had too many cars in my garage to work on it, then i was broke for a while due to surgery, then i did some work on it for a while in winter but found a lady friend to keep me company so stopped again, and not im moving to Taupo and bought a house… havent done a single cut on mine.
Im also designing mine to be an XY machine (much to most peoples disappointment) so will be a bunch more work and will probably be shit once im done and convert back to standard maslow hahaha

I wouldn’t have pegged you as the worst Maslow user in the world. Your 3D-printed adapter for the Bosch router was great, and we used it on ours. We cut the screw-thread boss from nylon because my prints weren’t strong enough for that application, but the King of Kings bracket is still going strong. Thanks!

However, since your Maslow is in pieces, and most others have said they haven’t finished theirs yet it’s just possible that ours is the only working Maslow in New Zealand!