One thing that came up in the conversation was if I was interested in doing any sort of a licensing deal. I said that it’s an open source project with all of the information freely available and that I just want to see more people have CNC routers so I didn’t think there was a need for anything like that. They pointed out that’s true for everything except the name Maslow which is a trademark which I do own.

While the trademark is technically in my name I feel like Maslow is the community and I’m just sort of the custodian because someone had to put their name on the paper.

Do then the question is How do we want people to use the name Maslow? I’m not interested in making money from it, but I want it to stay true to representing this community. My first instinct is that saying anyone can use the name would confuse people about who they are buying things from, but saying that nobody can use the name would cause the community to be to fragmented (why come to the Maslow forums when you have a kit with a different name).

The solution I’m leaning towards is to say that anyone can use the Maslow name as long as there is a second word to qualify it. “Maslow” would be sort of a family name to say that it came from this community, and then the second name could differentiate it if multiple people want to sell Maslow variants. For example “Maslow Mike’s Edition” would be great.

“Based on the original Maslow design with the following improvements”

I also think whoever starts selling kits with the Maslow name should be required to send you and your team a kit for testing to check that it is of comparable or better quality, for example motors, motor mounts, sprockets, boards, cables, chains, ring and bearings etc. I also think they could leave the bulk of the hardware that can be purchased locally out of the kit such as all of the screws for building the frame and just list proper sizes needed for durability.

Just my thoughts on the matter.
Jim

I think allow the name Maslow itself to be used freely, or perhaps with the limitation that variants must qualify the name (so forks and offshoot projects need to use names like “Giantised Maslow”, “Maslow for Stonework”, or whatever), rather than confusing the main version/product type.

I thought of “Official Maslow Kit” as a trademark, but I think that’s too open to becoming a paid-for logo which doesn’t actually imply quality control.

A trademark on something like “Official Maslow Sponsor”, given only to those who support your efforts, perhaps with licensed logos with levels like “Corporate Sponsor”, “Individual Sponsor”, or whatever, would be fair.

what is the story behind the name anyways? I always figured it was just a clever play off the Maslow’s Hierarchy of Needs triangle, but maybe there is more to it?

You got it. The goal is to make a machine that can let people download and build things like houses, furniture, crutches, or a green house. Basic needs stuff. I don’t think we’re quite to the point yet where it makes sense to use Maslow to build a house, but I’m optimistic about where the project will be five years down the road

Self Actualization dictates that you should receive $ from an ever growing base… just sit back and meditate as the checks roll in… relax, buddah level.

Maybe do something like "The Maslow by *** " and put the distributors name in place of the stars. And for the original use “The Original Maslow” or “MaslowOG” for the youngsters.

To echo Larry, just look at Arduino for lessons learned. The Arduino name is still commonly used to refer to the family of products and platform but there are just so many variations as well as name/brand issues from the whole legal mess they had. It may be worth seeing what worked and what they could have done differently.

Maybe it’s reasonable to look at the Maslow as a platform / reference design but still expect 3rd parties to make their own name. So someone can promote a “2 Chainz CNC” that is “built on the Maslow platform” and it doesn’t have to be central in their product name.

Don’t get caught up feeling like it is selfish or greedy to preserve the Maslow name for the reference design. If those users of new systems can feel welcome here in the forums, wiki, and garden then I think that’s the most important thing to avoid community fragmentation.

The main aim should be transparency towards beginners. They should not end up with a kit not fitting their requirements.

I think handing a permission to a couple of people distributing a standard and unified kit could be interesting. Others can fork and add their name in some way.

I think it might also be useful to maintain the store site. So transparency towards beginners. Listing the standard providers and forks which have decent quality. How to determine"decent quality"? I think the community can take up this role. It already worked for the linkage kit and Bosch conversion kit.

I know I’ve only been here a few months now, but I thought I would throw in my two cents in. First I agree with Earl and Larry be careful and always try to learn from others mistakes. Second don’t be ashamed to protect the Maslow name look at what you have built and are helping others to build. Third and lastly I have to somewhat agree with mrfugu I think you should make money from this. I know from the beginning you have said that you don’t want to make alot but this is something special, and you deserve it so if you do let others use the name even as a “Maslow made by ***” or whatever I think you should get alittle kick back.

So if I put out my own Maslow - It will be called the “Maslow Bee version”? I’m down.

How about staying with the Git language?
Let them add a clearly visible fork to logo and name 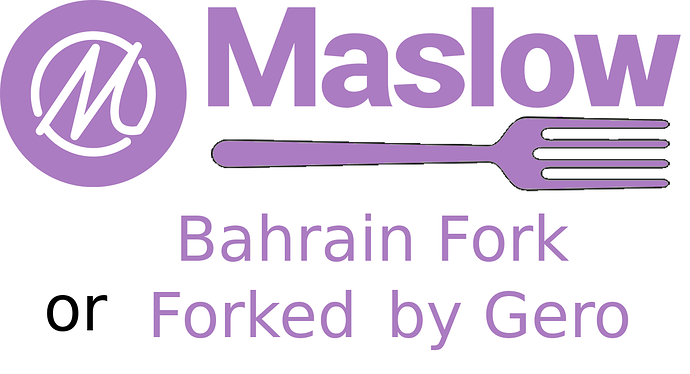 @bar Is it possible to ask ‘forkers’ to keep the GNU GENERAL PUBLIC LICENSE?

Main reason any company would pay for a brand name would be to increase sales. So if buying maslow trademark makes the company money, it will be a worthwhile investment. However if paying $XXX.XX yields no extra profit then why bother from a purely economical aspect. so if you do plan to go the paid route, price it within reach of expected profit margins.

If you wanted to, you could make it sort of a contest. Have the forum vote for their favorite distributor and let the top 1 or 2 use the maslow name free.

Hopefully free market selling of maslow yields the advantages of a competitive market place, lower prices, innovation and a better feature set. After all if all the distributors are selling the same, chains motors, etc. it just becomes a game of who has it in stock at the cheapest price.

Asking forkers to keep GNU license would stifle innovation IMHO. why invest time and money into making a product better, only to have the competition take your ideas, ship it off to china and undercut you putting you out of business??

Wild guess is most forkers will use the same hardware design so it becomes a mute point since the original design is already open to public.

I just want to see more people have CNC routers

Sometimes it can be that the spirit is more then the $.
How many of the non profit contributors will continue to offer their free service to a profit oriented organisation?