Maslow is not making money? Maybe there is a cash flow situation or they need advice on how to scale up with economies of scale?

I think Maslow could can make the whole kit in China and ship the whole kit with all the parts pre-made in china that would save a bunch of hassles and drive the cost per kit down.

I think Maslow could get a contract manufacturer in China…

What I understood is that they are taking a break.
This post could be of interest.

Any advice on talking to companies interested in the idea?

We have had a couple different companies reach out who are interested in taking our idea and commercializing it. My general response has been that everything is freely available and I’m happy to answer any questions. Is that the right policy? I wrote a quick blog post on the topic and I’ve been trying to reach out beyond our core community to get advice. Someone out there has got to have done this before and has some experience, right? I posted on https://news.ycombinator.com/ and submitted …

That’s not what they are saying, it sounds more like retreat and regroup and (see if it’s worth) go(ing) at it again. Seems like a good move, it might be time to scale up, and that could be hard to do when you’re stuffing the boxes yourself.

As long as the forums don’t go out of buisiness, i’m good

I’ve been here almost a year, and i still wanna celebrate the 1 year anniversary of my maslow dollar waitlist purchase with the actual construction of my maslow

I was wondering whether once the breather/regroup has happened, it might be worth making a list of things that the community could take over to ease some of the workload. E.g. for distribution, sending a single delivery to Europe (perhaps even straight from China) which those of us over this side could then split into the separate kits might help them out - e.g. if a more commercial distributor partnership didn’t feel right. I suspect forum members might even take payment in the form of spare router bits!

I suspect part of it is that in making these large orders, they are ending up
with a lot of their money tied up in inventory.

It will be interesting to see what they decide to do next, either enhancing the
maslow, using the maslow, or making something else.

Unlike the makesmith, I think we have enough users here to keep development
going, even if Bar were to bow out. Getting the maslow kits may be harder, but
we are getting to the point where there isn’t much left that’s not available
directly (ignoring the hints that some commercial versions may be pending)

Nope! We’re not going out of business

Financially everything is actually looking great. @dlang is right that most of our money is wrapped up in inventory but we’re not about to miss the rent and the forums won’t go anywhere anytime.

We just need a chance to stop worrying about what’s stuck in customs where and what we need to order and buying tape and all that stuff long enough to take stock of how we can do things better.

I think we can do a better job of meeting the communities needs and have better work/life balance.

Like everything we do, we’ll reflect as a collaborative process with the community once we get this batch out the door. When we started the project the lay of the land was totally different than it is now and it just feels like time to assess if we’re doing things the best way.

Our top priory always will be making CNC accessible to as many people as we can.

TL;DR: We’re not going out of business

I have made a couple kayaks and canoes. I wanted to try to make something similar to Point 65N’s modular kayak. https://kayaks.point65.com/

*Edit: I have 2 of these that I built laying around. I thought about cutting and capping at the arrows just for a proof of concept and then coming up with a way to join them. I thought about doing 2 long dovetails have them slide together but didn’t know what to do with the gap. 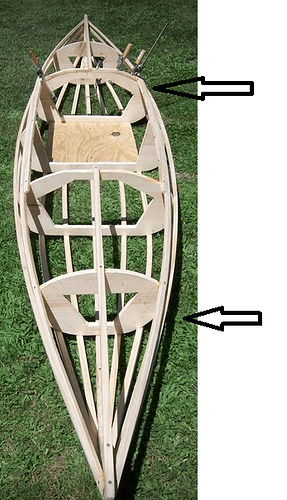 I would love to see this discussion move over to the boat builder’s thread:

There was a suggestion to start a thread for all the boat builders - So here it is. If your building a boat tell us about it here.

The way that Chesapeake Light Craft does it is they sandwich two plywood bulkheads with a layer of cardboard in between. When the boat is built, you then saw the boat in half and the saw follows the path of least resistance through the cardboard. A little cleanup and some neoprene and you’re good to go. Oh, the bolts were already epoxied into the plywood prior to construction.

Good idea. Got a little excited when I saw @bar wanted to do something similar. Can we just copy the last 2 Post over there?

@bar, if you have to charge an extra $30 per Maslow, so that you can hire someone to manage some of these remedial tasks, I would be in favor if it results in one of these boats on the CG.

Sounds like you guys should take a little holiday. Spend time to catch up with each other and leave Maslow questions to wait until you get back.

My 17’ two holer fits fine on top my Vibe, as do the two 9’6 Kiwis, although not (edit) all 3 at the same time. Back when I still had the (short cab roofed) Brat it would hold a 17 foot whitewater Grumman canoe, although it took help to get it up there.

You can do amazing things with foam blocks and ratchet straps.

Drop by, we have a class 5 and several easier rivers within an hours drive. Since owning my own boats I stay with easier less damaging (to both the boats and occupants) water. Levels are high with the snowmelt, but the waters are pretty chilly right now

I want the same Kayak! If you feel inclined, keep me in the loop!

Hi guys, thanks for your fantastic work!

I received my kit a few days back and immediately tried to assemble all the parts. I have assembled a few kits and this is not the worst, but being the previous build a Prusa original MK3, the bar was very high.

First thing I noticed is that there are a lot of parts that are not classified or identified. Also the quality of the metal parts like the brackets for the Z axis is not very good. I think that they are too thin, the same for the screws for attaching this machine seem too thin and would prefer to see M5 or M6 (which are easier and cheaper to buy).

The building instructions are not terrible but need some work and organization in the website.

When trying to upload the firmware to the Arduino board I had some trouble, you can improve that step just preloading the latest firmware. Takes some time, but I think that it could be well spent from the user perspective.

Instead trying to order them from China and pay in advance and all this trouble I would suggest to look for local suppliers/partners in Europe, USA, etc. Shipping all this weight of screws and chains seems not an intelligent thing since it can be found in any local hardware store. The same for screws, bolts and the such. And then you could concentrate your money and time in buying the special bits that are custom made for you like: motor shield and the motors, cables and that’s all. Maybe designing some parts to be 3D printed could help to make it easier to build locally?

Still not have builded the frame because I have no space, but looking for some partnership with a local maker. We also want to build something that can be easily disassembled and put aside.

One last advice: Being the cheapest cnc is a good add but anyone in China can make it cheaper than you.

There is a system called " Just In Time Delivery " Quite a few years ago Caterpillar implemented it in their lift truck industry. The up side was they did not keep a huge inventory of parts and the suppliers they set up were on board with the idea that when they had a number of orders Cat would generate a schedule to the suppliers and things would flow in when needed. Is it possible that would work for Maslow??

they are shipping via flat-rate boxes, it doesn’t matter how heavy they are (up
to 75 pounds)

remember that these are being sent to fairly inexperienced people, so it’s good
to include as much as possible.

JIT ordering requires that you have a fairly predictable delivery time, and that
your orders be enough larger than the minimum quantity that you have an option

for the motors, the minimum order quantity is 1000 motors in one order.

I have to say that, at least with my kit, all the parts were there, including all the wood screws I needed to build the default frame. Lumber and glue were the only other things I had to buy. As far as instructions, the one part I messed up on was the chain tail management, and that needed to be upgraded with a bungee for more tension.

Building these things really never seems to end, as folks are constantly making improvements. The Maslow community is outstanding in this regard. Hanna and Bar have a lot to be proud of, bringing this monster machine to the masses and creating a generally positive thinking, creative group that is building and sharing ideas and projects.

Hard to compare Cat to a start-up business. I hope that a good solution can be found