I redid my system

Okay so I tightened all the loose screws, added locktite. Checked frame for level. Downloaded webcontrol (linux single file)- I have some problems getting it to launch a second time. I have to click the program- check task manager or terminal to see if running. Then call up webcontrol on firefox via history or book mark. Terminal gives error bad symbol- get-date. But if I call it manually as described above I can run it.

It controls the router much more smoothly than groundcontrol. Ran calibration entered those numbers and I am getting pretty straight lines. But running triangular calibration does not work on webcontrol. Says this feature is not available and crashes. So I ran the file on groundcontrol and entered those numbers back into webcontrol. They seemed to work.

But I am having problems creating a square box via easel. It always comes out longer than wide. But if I enter dimensions and manualy cut with webcontrol the box is square.

So I think the problem I am having now is mastering gcode- or at least going from a cad / cam to gcode.

I did not mess with firmware though webcontrol gives error saying my firmware is newer than the recommended firmware. Should I change it?

There should be an option in webcontrol to use either triangular calibration or
holey calibration (6 holes, 12 measurements). you have to flash the firmware
when changing between them (save a copy of your config, it’s now an option from
one of the menus, before you switch)

please post the g-code that you say isn’t comeing out square.

Heres the gcode. Ill look into flashing the firmware

so looking at this, you are doing some small moves in the corners, did you tell your system to round over the corners? (the movements are only ~5/100 of an inch, so you probably won’t see the effect)

how far off from square are you measuring the result

But running triangular calibration does not work on webcontrol. Says this feature is not available and crashes.

I did not mess with firmware though webcontrol gives error saying my firmware is newer than the recommended firmware. Should I change it?

When I click the button on actions page. It opens the calibrate page then it gives error. It does start the cuts though. But if you click stop button it gives same error.

I am going to try and change firmware today and see what happens.

Thanks I will try this now.

It overwrote all my ini files. I should have thought to make another copy of them first. It erased all my chain lengths.

So Ifigured I would have to start over again And now I cannot communicate with my arduino board at all.

Neither ground control nor web control can communicate.

So couple of questions:

It overwrote all my ini files. I should have thought to make another copy of them first. It erased all my chain lengths.

Webcontrol doesn’t use .ini files. The config is stored in webcontrol.json so if the .ini file got overwritten, I think it must have been done by ground control somehow. However, chain lengths aren’t stored in an .ini file. Did you get a message about invalid chain lengths right after performing the update? If so, that’s an issue inside the controller (no .ini files involved with that). Upgrading firmware doesn’t normally cause you to lose chain lengths though, so that’s odd.

So I figured I would have to start over again And now I cannot communicate with my arduino board at all.

All my laptops are linux. Does windows run these better? Are some of my problems linux based? I know my old laptop outside maybe some of the issue, and I have a much newer laptop I can use but it also linux.

I don’t have a controller connected to a linux box so I can’t say. I build the linux file using ubuntu 16.04 virtual machine. I don’t know if it matters that I use ubuntu or not (for compatibility with other distros).

What are the steps to start over from scratch? I seriously hate doing that chain measurement thing all over again but it seems I lost whatever data I had on the board when I updated. My numbers are still in my settings- but it cannot recognize chain length or sled position and cannot communicate with motors.

How To: Manually Reset Chains, the Easy Way Wiki

Every now and then you may find that you need to readjust the chains back to a known position. This could occur if you power/connection issue and the controller lost it’s position, had a chain skip, took apart something for some reason, etc… Fortunately, there’s a way to reset the chains without a lot of work. During calibration, after you set the sprockets vertical, you extend the chains out to reconnect to the sled. If your “Extend Chain Distance” is a multiple of a full revolution of the s…

Attached is errors being thrown in terminal. 1st is screenshot,png of boot up of webcontrol. 2nd is screenshot1.png of moving sled.

I did manage to get it talking to the board- but now everything runs backwards. Zaxis now moves entire sled. Y up moves y down and slightly to left. Ydown moves sled up and to the right. X right goes left and slightly down. x left goes right and slightly up.

No I did not mark the vert sprocket. But I will when we get this going again.

Second problem is that webcontrol is losing serial connection over and over. I am concerned the board maybe going bad. I did unplug and replug usb and power cord and allow to it restart. That seemed to stop the connectivity problems for the time being. But with it running backwards now I dont know what direction to go. 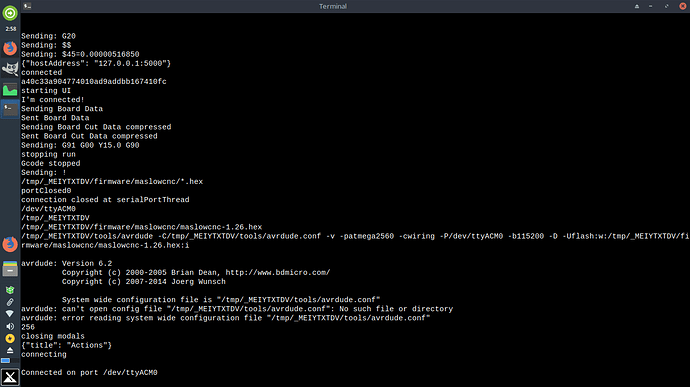 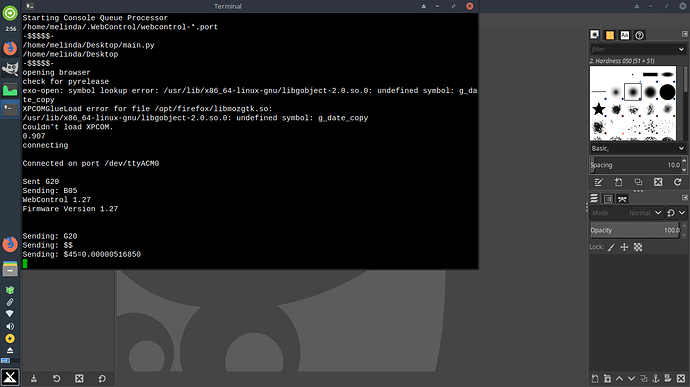 I am going to check to see if my chain off bottom setting got messed up.

Which release of webcontrol are you using? 0.907?

I fixed the reverse issue. It should have been chain off bottom.

Now we are back to the original problem:

I used D Lang’s Gcode he posted above to cut a 6" square:

So now to figure out the calibration issue that I was working on originally.

BTW after I upgrade to holey my screen still has the holey calibration option grayed out.

So some progress at least, to where we were. Now to figure out how to get the holey calibration to work.

Yes I am running single file.

I see the avrdude.conf file is missing from my linux VM. I’m creating a new releases (v0.908) with it included. I’ll post when its up and you should be able to update via Actions.

Okay I will try it

As for the second screenshot error. I haven’t seen that error and wonder if it’s a webcontrol issue or an issue with your linux setup. What linux distro are you using?