I redid my system

Great! I went and looked at code while waiting on your response and saw where an issue could come up (eeprom value not being initialized) and went to the main firmware’s repo and saw that @blurfl had made an update to it to avoid that situation. So now I’m working on integrating his update into webcontrol’s holey firmware. But you should be fine without the firmware mod since you initialized the eeprom with the B99 command.

how do i make the measurements? or is there a image i can see?

I’m starting this thread to document the Holey Triangular Calibration development process. This process is different than the current process as it determines the exact (as exact as possible) coordinates of each “cut” location. The current process only considers the distance between two cuts at the top, two cuts at the bottom, and between the top of the work area and a cut near the top. It is based upon the assumption that the cuts are perfectly centered. The holey process measures the dista…

These are the instructions. I’ll work on adding the image and such to webcontrol

Here are updated and consolidated instructions. There is a fork on GitHub which is functioning. If you would like to use it, you will have to be willing to open a python script and modify text as part of the calibration process, and install the Python scipy package (which is pretty straight forward). Otherwise, it is very similar to going through the current triangular calibration. I would like to get one or more other individuals using it, to further demonstrate its viability and create some i…

Okay I ran the calibration. Twice.

I have attached an image of the 6" square it cut.

I mean this is a better result than no motors at all. But something is still off.

Previously when I was running 1.26 I had to upgrade to 1.27 to stop the parallelagram cuts.

I appreciate all the hard work surely we must be getting close now. 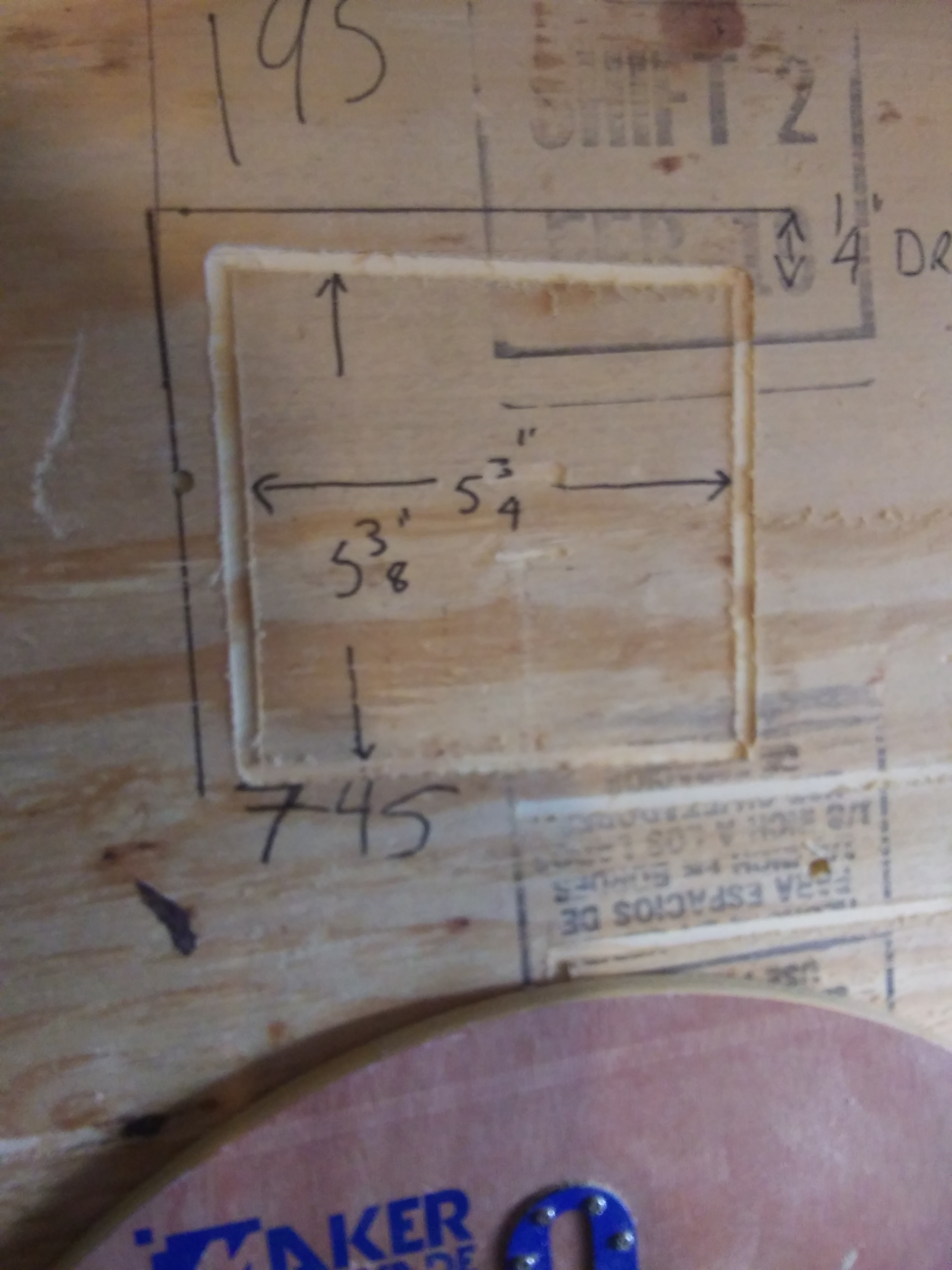 That’s pretty poor results. Did you double/triple check your measurements and that you entered them properly? I don’t mean to be insulting, but it happens to the best of us.

You also clicked ‘Accept Results’ at the very bottom after doing the ‘Calculate’?

Yes I did it, then I had my wife remeasure everything and do it again. We clicked calculate and accept.

But I will check again.

It didnt cut anything. It drilled six holes. Obviously I have skipped something.

You pressed the ‘cut’ button and it drilled 6 holes… you measured the distances, entered them, hit calculate and then accepted the results. You then repeated the entire process, including drilling six new holes, correct? If so, did you fill in or mark the first set of holes to make sure you didn’t get confused and measured to one of them?

Ah. No I did not drill six new holes, I just remeasured the first holes. It did not occur to me to drill again. I will do so again morrow. And I will mark the holes.

if you just remeasure and re-enter the numbers, the software thinks that it cut
the holes with the prior calibration. If you just measured again, you are
effectivly correcting twice for the same error 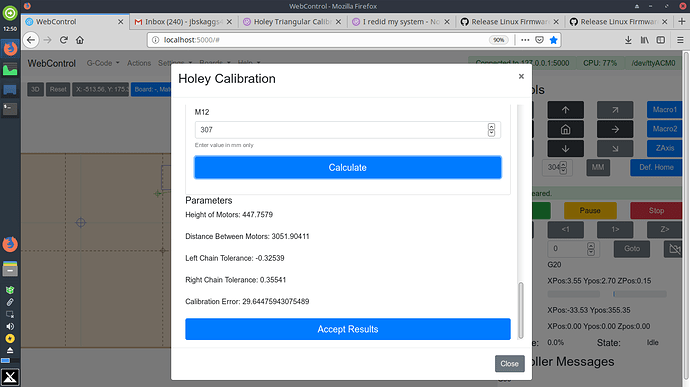 Afterwards I ran D Lang’s 6"square code and got this: 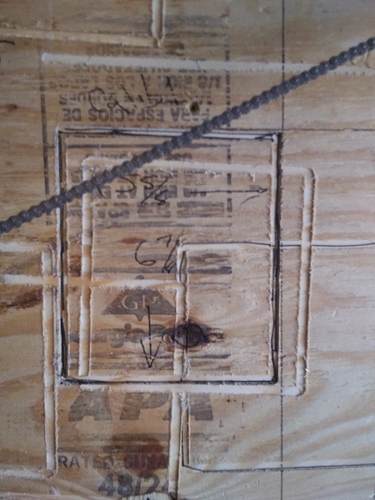 So I ran the holey again. Recut. Measured. calculated and accepted. 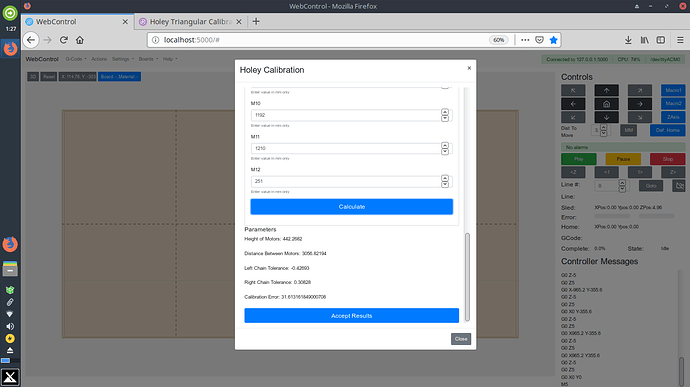 Ran Dlangs 6" square again. And got this: 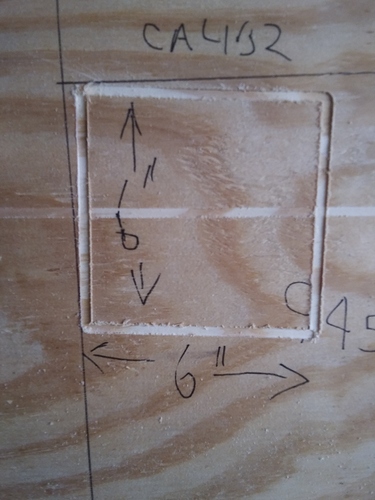 The square dimensions were 6" x 6" but as you can see it is now slightly rotated.

So what do I do now?

At this point, I think it’s a calibration/setup issue… not a webcontrol issue. You may want to start a new thread asking for help to get a wide audience. But, if you could, go to Actions->Download Diagnostics File, and email it to me at madgrizzlemaslow at gmail dot com. I’ll take a look at the webcontrol.json and log files to see if I see something odd.

If you remember this whole thing started with a scaling issue under ground control. So we are making progress. It did cut the square to size which it could not do before.

Should I post the file here as well for others to look at?

What would happen if I ran it another time would it get better or worse?

Theoretically, the calibration is improved with each iteration. In practice, there’s a point of diminishing returns that makes it not worth the while. However, since you had such significant improvements from the first calibration to the second, I would say give a third calibration a shot. If you don’t see much improvement after that, then I wouldn’t think more calibration would help.