So I have been using my Maslow for about a month now, and I’ve been making numerous test cuts for various ways to make one design. Here’s the shape I’m trying to create: 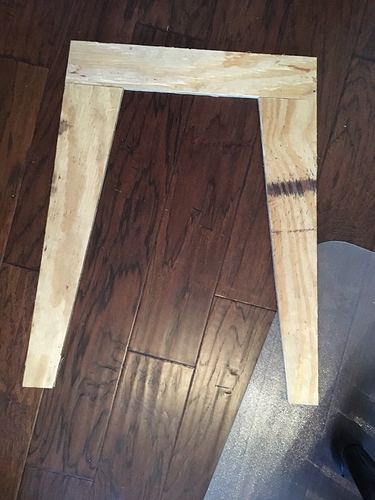 But, it’s going to be a leg for an end table and it has to hold some weight, so I cut it in three pieces like so: 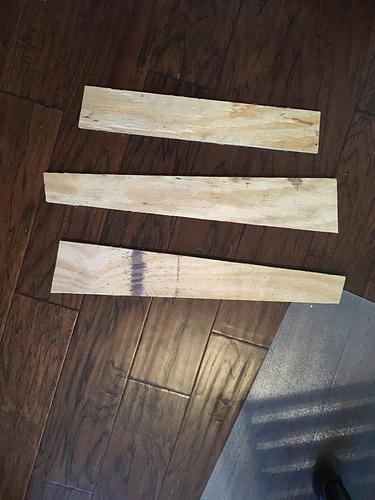 At first I tried to make a joint between the leg and the crosspiece that resembles a dovetail, or maybe a jigsaw puzzle piece, but none of the tests fit after I cut them. (They all fit together perfectly in Fusion) I don’t have pictures of those because they were cluttering up my workspace and I threw them away. Next I tried a pocket type joint that mostly fit: 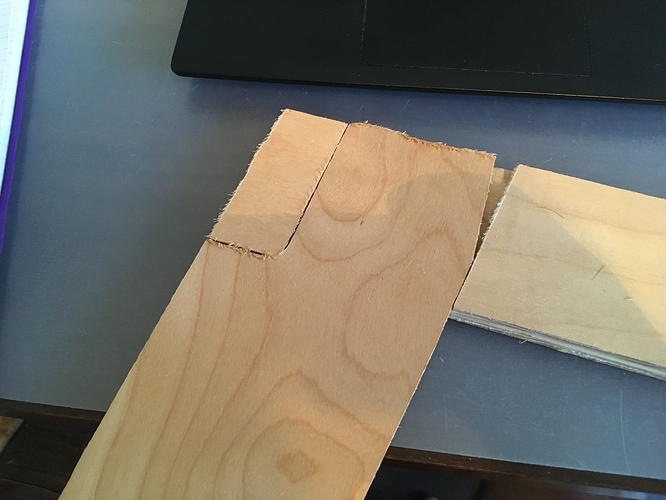 IMG_33024032×3024 1.69 MB
(Ignore the notch out of the right side of the leg - the piece I cut it from was a little too small) This might have been a winner, except for the curve at the bottom outside corner of the pocket. On the leg piece, it cut really well: 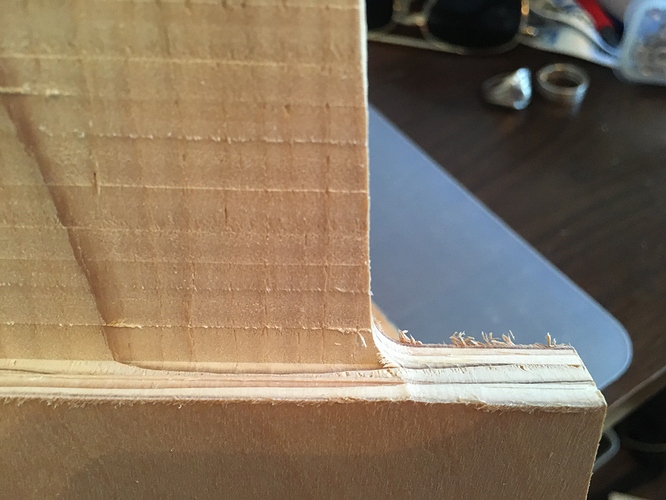 But on the crosspiece, it looks like the Maslow cut in too deep on the bottom edge. 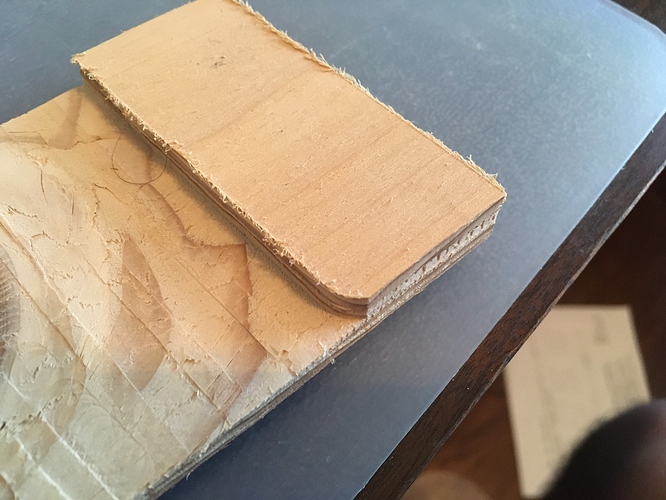 The curve is supposed to be tangent to both the edge of the pocket and the bottom of the piece. I have been pulling my hair out from this, has anyone else had a similar experience who could help? The other issue I’ve been having is with cutting tabs. When I use Fusion to cut tabs, I get weird dimples on either side of where the tab was after I remove it. 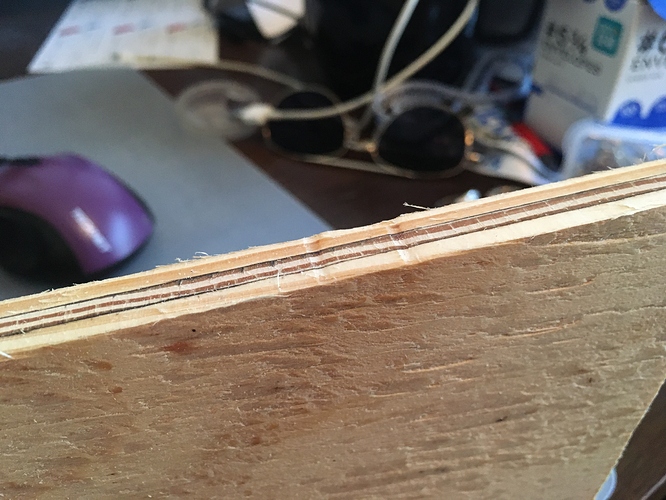 I could sand these out so it’s not a huge issue, but it’s definitely not supposed to do that so can anyone help?

I recentered my router on the sled because it wasn’t perfect and when the sled would turn a little bit, the bit would move. My second z axis had some slop in it with the stock plunge base that would bind and it was more pronounced on long z axis moves. If you are using the stock z axis rigid setup, you may want to check your bungee tension, lube your router base so the router slides freely and possibly tighten the base so the router doesn’t wobble at all, but still slides freely. The tab marks you show in the last photo went away for me when I switched to the meticulous style z axis.

For interlocking parts I have found that keeping the pieces aligned in their desired end position is best. This sucks for using least material but make much better fitting joints. So when you cut your legs you want it laid out as ‘n’ shape like in first picture. With the top piece offset up. If you cut the pieces like in second picture (all parallel) then small discrepancies between X & Y axis calibration become more pronounced. You also want to keep the joints ends as close as possible in layout - so don’t layout the top piece to be cut at the bottom of the legs. Finally you want to flip pieces on their shortest length. e.g. the top piece should be flipped around horizontal axis (upside down) rather than on vertical axis (flipped left to right).

Fusion360 struggles with pockets that have curves intersecting exterior cut paths. When making pocket cuts that fall of the edge of the piece you may want to extend the pocket about 2x cutting bit diameter beyond the piece. Fusion360 will not do this automatically and you need to create an offset path manually. This will stop the bit from following a previously cut path.

Make sure to slow down the speed of cut when hitting corners using “Reduced Feedrate” feature in CAM path settings.

You certainly have vertical play in your Z-axis which is visible in the uneven depth pocket cut (5th picture).

The dimples around tabs are interesting. Are you pre-drilling holes? Or is this a multiple pass operation? Might be wobble in z-axis when raising or lowering.

Here’s a summary of settings that worked well for me:

I ran some more cuts today and got the best result so far. Thought I would share my settings: Make sure to set the tool settings first as other section operation setting are base of these: Tool Default 1/4 Spiral upcut 2 flute from Maslow Spindle speed: 10000 rpm Cutting feedrate:30 ipm Lead feedrate: 15ipm Ramp feedrate: 13ipm Multiple Depths Max depth: 0.2 Use even step downs: Checked I often use ‘Tabs’ and set them at 0.15" height when cutting 3/4" stock. When used with 0.2" depth th…

I agree with Orob. I’ve seen the little notches at the tabs before. My router clamp was too loose. When cutting and the sled is moving, the router would tilt slightly. When it came to a stop to retract or plunge for a tab, it the router would tilt back to its relaxed position in the clamp and carve out those notches.

I could never get this slop out of the clamp - there was no sweet spot. Tightening the adjustment screw made the z-axis bind, and no amount of lube or sanding could fix this. I use a cheap Canadian brand of router, not the recommended one. Ultimately I decided it would be cheaper to upgrade the z-axis rather than buy a different router.

Alright, y’all have given me a lot to think about. Thanks for the quick replies, and sorry I haven’t gotten back to you yet. I tried tightening and lubing the router casing, and that seems to have (mostly) fixed the plunge/retract wobble.

For interlocking parts I have found that keeping the pieces aligned in their desired end position is best. This sucks for using least material but make much better fitting joints. So when you cut your legs you want it laid out as ‘n’ shape like in first picture.

The end goal is to use solid wood boards (poplar/oak mostly) for a better final look, and I want the grain running longways down the piece for structural purposes, hence the cut layout. I could probably rig something so that it uses three separate boards on program file, so I’ll try that.

Make sure your sled rotates around a single point. With router on plunge into wood and manually rotate the sled 90 degrees each direction. Turn off router and check the hole - it should be perfectly circular. If its oblong your sled is not centered.

I did this test, and my bit is indeed not centered by quite a bit. What, in y’all’s opinion, would be the best way to fix this?

I did this test, and my bit is indeed not centered by quite a bit. What, in y’all’s opinion, would be the best way to fix this?

I made a quick vector template which I used on my new sled which prints on 11x17 paper. When you print this make sure that the printed square is exactly 1" in both direction. If not you will have to stretch the graphic and print it again. Use Inkscape/Illustrator etc to open/edit the file.

If your existing holes are too close to new holes then you may need to make a new sled base. You could try rotating the template a little to get enough clearance but this may cause problems when the sled is at the very top of the work area.
(Right click on image and select “Save image as” to download.)