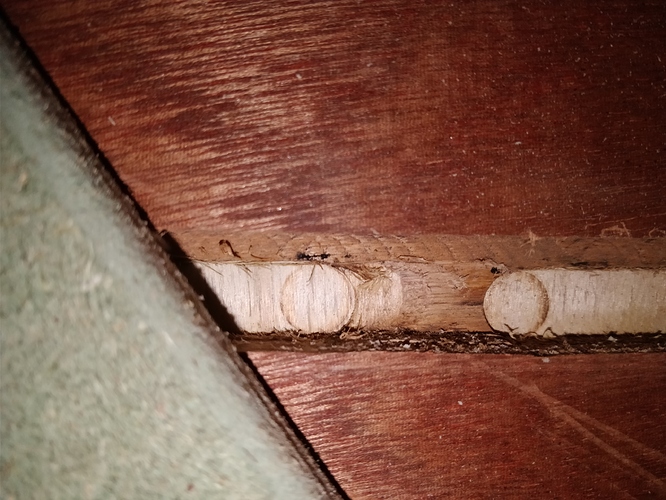 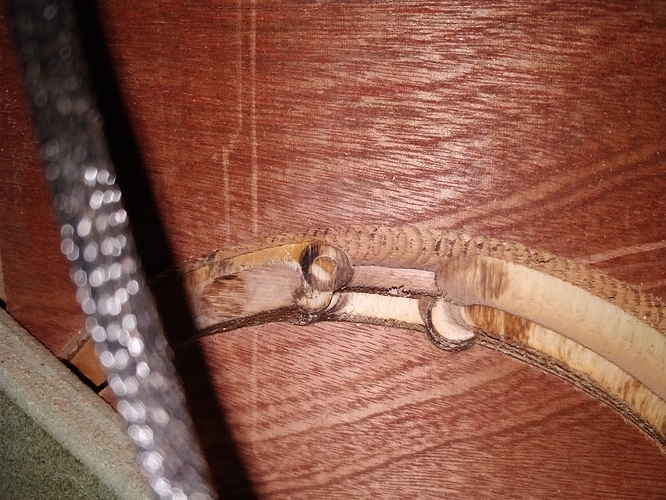 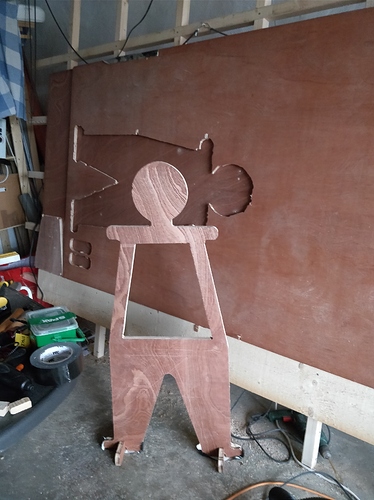 Made my first real object with Maslow. I calibrated several times and did a few tests before, mostly with mdf and not plywood.
Things didn’t do smoothly, especially the repeatability seems quite off. Every pass ended up several mm offset from the previous pass, in the end my 12mm bit left an 20mm groove.
The Z-axis was also challenging, the router I use has a locking mechanism every 5mm, so I manually needed to unlock it. When I missed the click for locking, the next z gcode would not be correctly executed.
Lost calibration 3 times, I don’t understand why or how this happens.
Finally, it seems I made a depth mistake in fusion360 cam, resulting in a groove of only 15mm deep, leaving 3mm uncut.
I ended up drilling some holes and using a flush trim bit to cut the plywood from the other side and clean up the grooves. I only have one router, so it required me to completely dismantle the sled.
Any thoughts on improving the process would be quite welcome. I’m a real beginner, never done woodworking or design before.

Lets see if we can figure out what’s going on with the issues you were seeing. It sounds to me like there are four distinct issues we need to fix:

I have ideas for things we can do to address one, three, and four. I can’t give you much advice about the Triton router having never seen one in person.

The several mm of offset with each pass sounds a lot like a chain skipping issue to me. If there is one point where the chain jumps a tooth with each pass, you will see the type of offset that you are seeing. If you can keep an eye on the chain sprockets while it is running you might be able to see it skip, or you might just hear a clunk because the skip happens too quickly to spot with the eye. The best solution is to be sure that your sprockets are totally aligned with work surface so that the chain feeds smoothly. If the motor is twisted in relation to the wood, or if it is further in or out than where the chain attaches to the sled it can lead to the chain not feeding smoothly. Another solution is to improve the guides which feed the chain onto the sprockets.

I also remember that your frame is substantially taller than the stock frame. It might be worth testing to see if cuts come out better towards the top of your frame which would be more like the middle of the stock frame as a way to test if the extra height is working for or against you.

Issue number three (the loss of calibration) could be another reason the paths are not coming out aligned. You should never lose calibration for any reason while cutting. Can you help me better understand what happened there? I have not seen that happen myself. Did you receive the error message saying that the USB had become disconnected or was it the error message saying that the machine could not find it’s position when powering up?

The depth of cut not being the full depth could be an issue in fusion 360 like you guessed, but it could also have to do with “z-axis pitch” setting in Ground Control. Because each router moves a different amount vertically with each rotation of the z-axis motor you might need to change this setting to be correct for the Triton router. The number entered is the number of mm that the router moves vertically with each twist of the knob 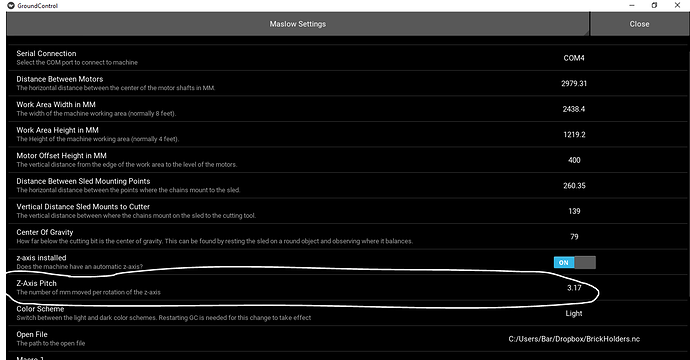 Let me know if any of that seems helpful or applicable!

Thanks for the quick and detailed reply!
You can download the latest version of the design here: http://a360.co/2lhC9NM
For problem 1) I didn’t notice any chain skipping, I will pay attention to aligning the mothers with the sled. Would it be a good idea to encapsulate the chain in a quarter circle of plywood? The taller frame has no calibration issues at the top while testing. At the bottom and near the sides the precision is not good. For the dressboy I moved the sheet to the right to increase precision while still efficiently using the space.
For problem 2), good memory Bar! It’s indeed a triton mof100. Perhaps there is a way to disable this Z-axis revolving button, I’ll look into it.
For problem 3), ground control showed a pop-up saying calibration was probably lost, the pop-up had one button “continue”. Clicking on it does not continue the run. Instead I had to restart ground control (no new calibration), goto the last gcode line that was done and run.
For problem 4), I double checked the value during tests. It’s due to my cam in fusion360. I had multiple objects, the main object I had to flip around to get right for ground control causing the stock to be higher than my main object.
Thanks again.

This describes exactly how I spent my day today! Day 3 after receiving the kit.

the ‘calibration lost’ popup is saying that the machine cannot compute it’s position based on the chain lengths, so that implies that something is wrong with the dimensions that it has for something.

half circles of plywood around the sprocket aren’t likely to help, but there are plywood chain guides that will

For problem 3), ground control showed a pop-up saying calibration was probably lost, the pop-up had one button “continue”. Clicking on it does not continue the run. Instead I had to restart ground control (no new calibration), goto the last gcode line that was done and run.

This popup happens if the USB connection is lost between the machine and the computer and I think this is the cause of your paths not aligning perfectly also! (especially if you think chain skips are not the problem) The connection can be interrupted by a bad connection in a USB plug or possibly even by RF interference. I know using Hannah’s computer if I use my corded drill near the machine it will cut her connection. It will depend on the environment and the computer used. If checking all of the USB connections does not fix the issue I would try a shorter USB cord which could be less susceptible to interference

I’m using my own sled design with the original chain setup (no linkage triangulation). I you are wondering why the sled is triangular, it is so it was easier for my to measure the distances as well as being able to put the sled stable on its side when not hanging. I have removed the bricks as it becomes so heavy that the motors can’t lift it any more! The router I use is heavy enough. 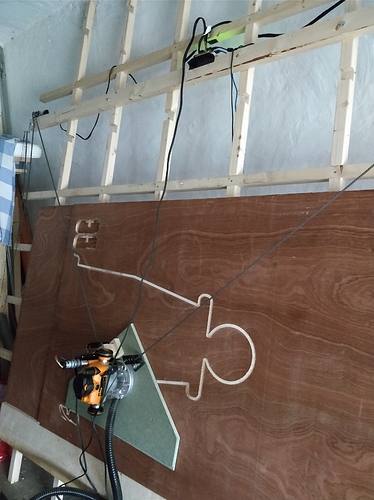 @dlang, it don’t think it can be a USB issue because it immediately worked after restarting ground control, I didn’t touch the USB connection. I’m using the standard cable that was provided with the Maslow.
Interference is possible? I am using multiple devices near my workplace. I never had any interference issues with other USB devices.

It’s possible for the USB connection to drop for only a tiny fraction of a second from some type of interference. When Hannah was seeing the issue when I used the drill near the machine she was able to restart GC and get the connection back, but the position would be slightly wrong

OK, then this is the most likely cause. How can I circumvent the problem? My computer, mouse, light have to be near the Maslow to work?..

Would using a shorter USB cable be a big inconvenience based on your setup? It’s possible that just a different cable would work better, but I would recommend trying the shortest one that would still work for your layout

I’ve had problems with USB connections dropping out when connected to an Arduino (running GRBL, say) when there were motors or spindles running. Bad USB cables are more susceptible to RF noise and something just getting a good cable will make the problem disappear. In other cases, putting extra RF chokes and your USB cable might help.

Also, keeping the USB cable physically away from the power cable on the router might help mitigate the problem.

I use a new wireless mouse with RF, which I did not use during testing

I have removed the bricks as it becomes so heavy that the motors can’t lift it any more! The router I use is heavy enough.

The absolute max weight of your sled shouldn’t be (can’t be) more than about 39.5 pounds. With a 39.5 pound sled at the top center of the work piece that puts 65.68 pounds of tension on each chain. The motors stall at 66 pounds. Though I am unsure what kind of current the motor control board is capable of putting out I would suggest not trying to run a motor near stall. While a motor is running it creates back EMF which keeps the current in the windings low, as a motor reaches stall the back EMF drops to zero and the current spikes (to the max available) and is free to heat up the windings. This can destroy the motor and the control board.

A 20 pound sled seems to be about the ballpark most people end up with. With a 20 pound sled your max static chain tension is 33 pounds (with the sled in top center position).