Really struggling to get this to work. I have a file in Inventor that I would like to cut. I haven’t learned Fusion 360 well enough yet to make the leap, and I am on a bit of a time crunch. So I am trying to go from Inventor .ipt to .dwg, open the .dwg in Autocad and save as .dxf, then import the .dxf in Inkscape and save as an .svg, to use in Easel.

The .dxf seems to be blank and I cannot figure out why. Any ideas? Files are below if anyone else wants to try.

Created the .dwg in Inventor. 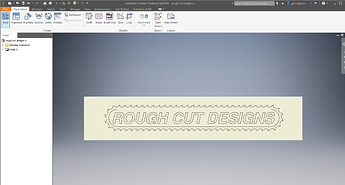 Opened in AutoCAD and saved as .dxf. 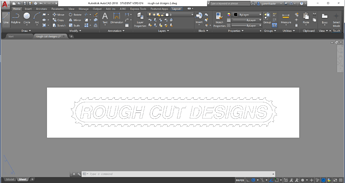 Tired to import into Inkscape but nothing imported. Opened the .dxf in Autocad to check it and it shows blank also. Same issue if the part is over the sheet or off the sheet. 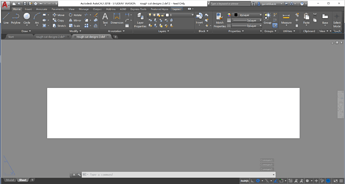 but inventor should be able to export a vector format that inkscape can read
directly, can you output postscript/pdf from inventor?

It opened in easel for me. There are some stray lines in the the design. I used an online converter for the DWG file.

*well having trouble attaching the svg. but it opened in easel sorry for technical difficuties.

On a linux system neither the .dxf nor the .dwg showed any visible part in librecad and qcad. Guess on something going wrong with the export.

I tried a few ways to keep the scale, and I don’t think its coming through. I made versions also where I left the title box and such left on the .dwg and those came through, just not the actual thing I want to cut. Maybe it is a layer thing.

I did try going to .pdf from Inventor, then using Inkscape to make an .svg. That sort of worked. I can open the .svg in Easel, but it is hundreds of individual lines, so when it tries to cut the outside path for example, it doesn’t follow the contour of the part but makes hundreds of small cuts. Way too much Z movement! Also I can’t make each of the letters into a pocket. Some work, some don’t. Maybe there is some way to combine groups of lines?

I just tried this and it worked, but same problem as the .pdf to .svg. The part is now hundreds of line and not easy to cut.

Does anyone know how to turn lots of little lines into a continuous path?

There is an option to go from a screen-shot via trace bitmap in inkscape.
Edit: I like the design and am challenged. Would you upload a high resolution screen-shot?

Try and put that svg into inkscape and re-trace it to less lines?

How do you do that? When I open the .svg in Inkscape it acts like it is all one image. I tried Trace Bitmap and it didn’t make new lines. I am not too familiar with Inkscape.

Im on the west coast, when I get home tonight I will convert the file and send it to you. I learned basic Inkscape by watching Youtube tutaorials. They were very helpfull.

You are there. The file @Blsteinhauer88 posted above from the online converter has a bazilion lines in it. That is normal. I right clicked on his image above and saved it as svg. Opened it in inkscape, highlighted all of the drawing and selected from the menu:

and now it is all one. From there I’d use

and generate the gcode in inkscape, but if you want to export it again to easel or carbide create or makercam, you can. Your call.

Thanks, I hadn’t tried opening it in Inkscape yet. and ctrl-K worked to combine the items. When I have some more time to sit down with it I will try to combine the paths and make it work.

I would love to learn Inkscape better, just have to figure out how to increase the size of the buttons. The buttons along the sides and top are only a few mm tall each.

Thanks to everyone who has helped so far.

for exact works on a long run .svg and the attached g-code creators are not the solution.
For art it might be ok. FreeCad is free but also paid programs do the job as soon as you can handle them.
Inkscape does have the ‘simplyfiy’ option but for accurate cuts from inkscape the line thickness needs to be taken to account.
Programs designed for cnc have the tool compensation built in.

I learned how to fix the buttons! it has to do with a windows manifest. I don’t have time right now to explain, but my friend google taught me, so if you search for zoom inkscape buttons windows 10 or something like that it will show up.