My sled is having jerky movements around the surface when it moves it any direction. The motors are running smoothly, I cant figure out what it could be. I have sanded the ring that the bearings roll on, maybe not enough? Im using some anti slip tape on the bottom of the sled to help it slip around, do i need more slippyness?

what is the angle of your surface?

can you provide a video of the movements?

14.5 degrees is the angle, and ill send a video later this afternoon when im off work

hmm, that angle is fine. What is the slip tape that you are using? Could the edges of the tape be catching on the work surface?

Do you have weight on the sled (i.e. the bricks)?

Were you cutting when the jerkiness happened?

No edges of tape are getting caught (its anti friction tape from lee valley) its jerky on a fresh piece of wood. Its jerky always wether im cutting or not, i have 2 bricks on it. No meticulous Z axis installed

Sorry life got in the way today and i didnt get to filming a video. I was only able to sand the inner edge of the ring so the bearings slide nicer. Is there any grease or lubrication you use one your bearings? Im going to try and put on some UHMW plastic on the bottom instead of the tape maybe this helps with the jerkyness

this is a stumper.

If you are sure the tape is not catching (my thinking was that it was thick tape, but looking it up online it looks like a 5 mil thick tape, so likely not the issue. Does it conform to the wood of your sled? If so, the ridges on the wooden sled might be catching even with the tape, though this seems unlikely)

And you’ve said that the motors are running smoothly, so I am assuming that the chain is also moving on and off the sprockets smoothly (no chance it is popping off? This has been a problem for a lot of people, and it happens faster than the eye can see, usually manifesting as a crooked cut)

The angle and weight seem to be fine. It happens whether the router is engaged with the material, so it’s likely not the bit going through something dense.

I sanded mine too, I think it’s a good idea given the texture of the powder coating, but it shouldn’t take much sanding, and running a finger along it should let you feel if there is anything for the bearings to catch on

Is there any grease or lubrication you use one your bearings?

I have not applied anything to my bearings, and I don’t think you should have to. Do they spin freely?

This is likely a good idea as it will provide a nice flat surface. Here is a link to how I put mine on:

So, after a single round of calibration, I went and recut the template for the friction reducing pads and was happily surprised to find that it was dead on! I managed to get all three of the pads cut (though I had to recut the template again after the first one due to accidentally nicking it with the router, but at less than 10 minutes on the Maslow, it wasn’t a big deal) and installed over the weekend, and now the sled glides beautifully. [Google Photos] …

you’d have to use wood screws if your sled is wooden, but it should be the same process.

Please keep us updated. I really want to figure out what’s going on and help you fix it.

Do they spin freely?

They spin freely but do not coast/free wheel very long

I havent had much time to adress the issues of the wobbly moves. Im starting to think that its just the natural movements. Very hard to capture on camera.
Ill keep you up dated

Today though I am addressing a change I made previous to the wobble, which is i changed the distanced between the motors to a hard measurement by tape. I changed the distance from 2997.4mm to 3012 mm (3012 mm is the measurment i got by tape messure) this is almost a 15mm difrence, thats huge!

I proceeded to cut the same test piece twice, 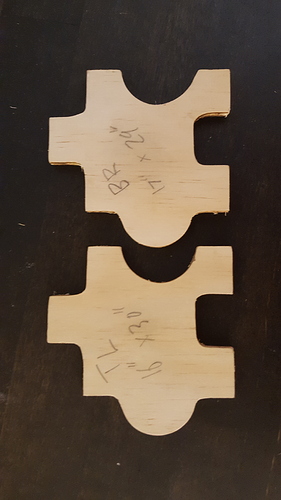 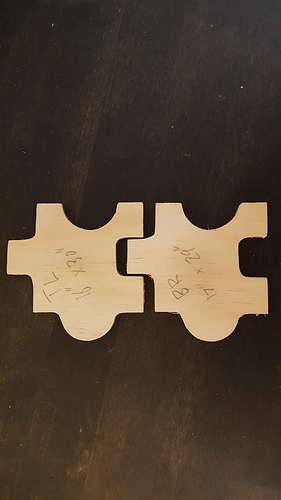 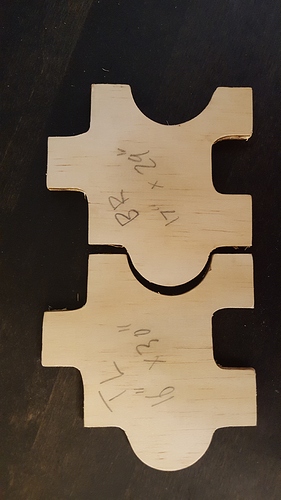 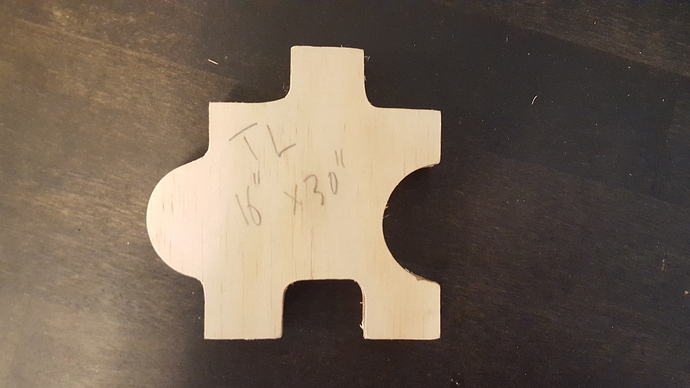 Basically out by a 1/8" on horizontal and some vertical cuts.

Interestingly though the wobble was not as present on these cuts. Im thinking it only effects bigger cuts

Anyway thanks again for your help

What is your depth of cut per pass? I ran into an issue this weekend where I forgot to change the DOC when I switched to a smaller end mill and the part came out horribly 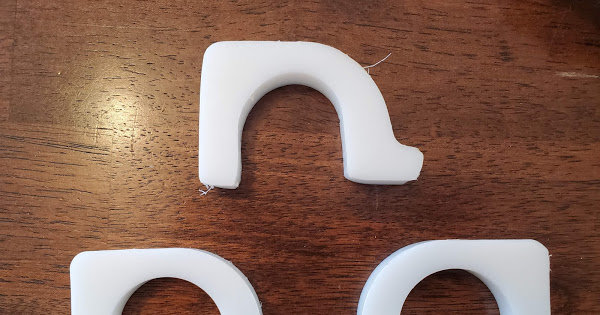 As you can see in the photo, the top one was cut with a DOC much greater than it should have been, causing the router to not be able to cut all the way to where it was supposed to. I had the DOC set to .125" when I was going to cut with a 3/8" end mill, but switched to a 1/8" end mill to be able to next the parts and didn’t change the DOC accordingly. The bottom two (which are nearly identical, though it doesn’t look like it in the photo) came out perfectly with the DOC reduced to .06"

This line of thinking is that if you are trying to cut too deeply in one pass, it might account for both the jerky movements and the accuracy issue you just posted about.

Okay, so, here we go, I got a little discouraged over the past 2 weeks trying to sort out my issue of being off by an 1/8th. Ive been double checking everything and i must be missing something crucial. 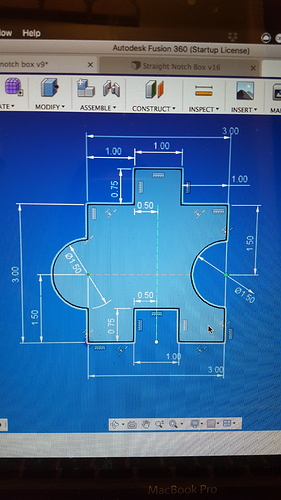 I re calibrated the machine after cutting a few pieces changing a variable each time, (distance between motors, COG, Gcode, number of passes, etc) so i recalibrated and cut a diffrent piece because i thought i would solve the problem. I cut a box with notches to join the sides. And it came out Great! 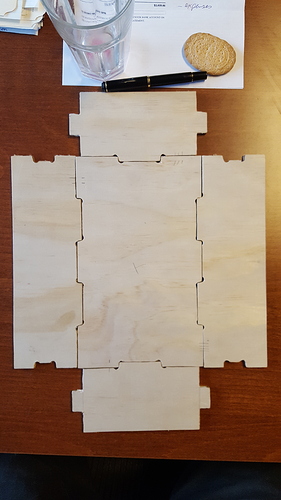 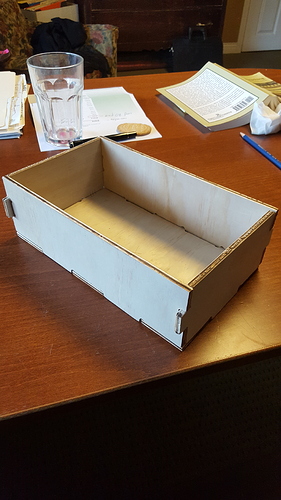 My machine was cutting at one point plus or minus 1mm but now off by an 1/8. I dont think ive made an significant changes. It all went to the dogs when i re calibrated it.

Oh and all the cuts ive been doing are in the center square of 2’ on the Z and 4’ on the X axis. Where i understand it should be the most accurate.

I adjusted the CoG further to keep the sled from lifting (it was doing it slightly) still not 100% fixed. Ive adjusted the feed rate to 250mm/M witch seems to help. Any ideas how to eliminate that? And what feeds are you all runing at?

Im aiming for plus or minus 1mm thatd be great but in the mean time, i cut a tree for my mom cause that doesnt need to be super accurate. 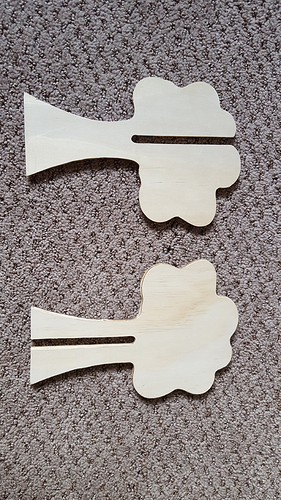 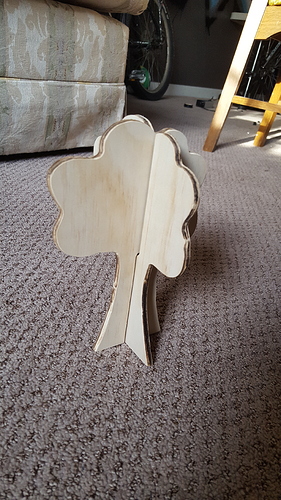 All the outside dimentions are off by 2/8ths now arrrggg. But one of the notches is dead on and the other is 1mm out. I dont understand.

I am by no means a mechanical genius like you but id like to get it pretty accurate.

My machine is precisely inaccurate, any ideas on what it coule be?

What size bit are you using? I am wondering if there is a setting for inside vs outside vs on the line cutting in Fusion. I am not sure that the tabs and internal cuts wouldn’t be affected by variation in where the CAM is setting the path, or if the bit size is greater than what the CAM thinks it is, but I figured I’d mention it as something to check.

Also, with respect to your puzzle pieces, I noticed in Inventor there is a setting in the CAM to “roll around corners” which I discovered adds a significant radius to all the corners and destroys the part. This was checked by default, with another option to “preserve sharp corners” be un-selected. You may want to see if there’s anything like that in Fusion’s CAM.

Im using a 1/4" bit, ive combed throught the toolpath generator and found a setting called compensation. And its set to compensation in computer which automatically calculates the distance away from the edges the toolpath needs to be.

Yes fusion has the same feature, and ive been using the keep sharp corners for all these cuts

I assume you have specified a 1/4" bit in Fusion.

I assume you have specified a 1/4" bit in Fusion.

Yes i have specified a 1/4" bit.as the tool being used, what feeds and speeds do you use for a quarter inch bit ?

in wood I have used up to 30 inches per minute and I run the router at about 11K. For detailed work I drop the feed to 20 ipm or less, especially if the design is intricate.

Woah thats really fast, i thought maslow could only run at 500mm per minute?