I calibrated my z axis to cut the final sled. It only cut 1/2" down instead of 3/4". I calibrated again and started a new cut. This time it raised the bit and lowered to drill the first hole. It never came close to the wood. I don’t know what I’m doing wrong. I really need help calibrating. Can someone dumb it down for me? Please!

Yes! All you need to do is lower the bit until it just touches the surface of the wood and then press “Define Zero”. 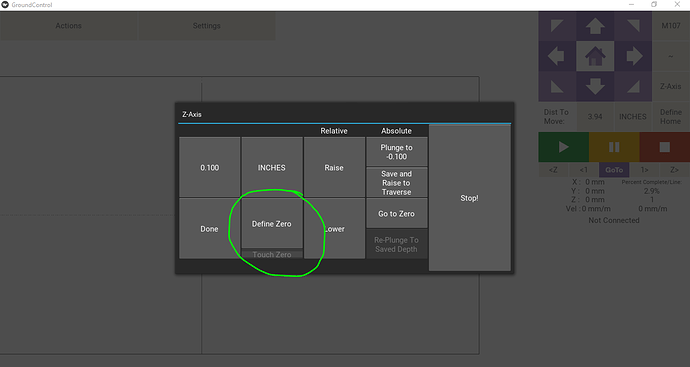 So I did that then I opened my file and started the cut. It raised the bit all the way up and went down but never touch the wood. Do I need to calibrate every time before I start the cut? Thanks for any help!

Hmmm…that is strange. You only need to calibrate the z-axis when you put a new bit in so the length changes. It could be that what you are seeing has to do with the gcode file and that you are doing everything correctly when setting the depth.

I would try playing around with raising and lowering the bit a couple times and watching the digital position readout to see that everything looks right. Look for the the fact that after raising the bit and lowering it again that it returns to a position of 0.0 at the surface of the wood. 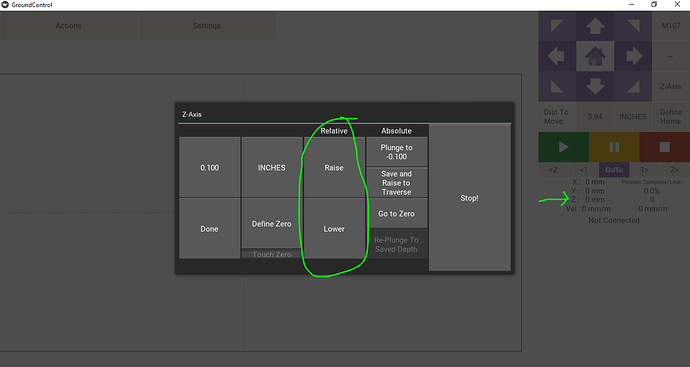 Thanks Bar! I will see what I can figure out. I was thinking 0.00 should be at the wood so when it goes negative it’s going into the wood and positive it’s coming out. Thanks again for the help!

I just want to make sure I’m calibrating the right why. I lower it until it touches the wood then I define zero?

the CAM software can define 0 as the top of the wood or the bottom of the wood.

It’s very common for CNC machines to define 0 as the bottom of the wood (the
motor is a fixed height above the frame on the gantry, so that works and
prevents you from cutting your frame)

your symptoms sound like you had 0 defined as the bottom of the wood in your CAM
step.

I know what the problem is. The screw on my router keeps bottoming out before it gets to the cut depth it needs to be to go all the way through the wood. I can’t figure out how to fix it. Help!

If the screw is bottoming out, the only solution is to make the bit stick out
further.

this means a longer bit (or mounting the bit with more sticking out), and
thinner sled, or routing a pocket in the sled so the router sits a little below
the surface.

I moved the bit so I sticks out farther. That fixed the problem for some of the holes. It’s going all the way through some holes but not others. I’m cutting 3/4" plywood. I’ve moved the cut depth to .90 so I’m hoping it will cut through the rest of the way now.

it should be cutting the same depth everywhere.

watch it as it is cutting, is the wood bowed so that the sled is riding between
ridges?

do you have something providing tension to pull the router towards the sled?

create a g-code file that moves the Z axis up and down a few dozen times in one
place, does it end up at the same depth it started? or does it wander

I am experiencing also a problem with the z axis. It worked perfect for like a half hour and certainly it looked like it changed 0 position during the cut . Can’t figure what the problem is

Are you using Ridgid R22002? Make sure the router doesn’t pop out of the orange tab thingy. Also make sure as the router head moves down, it doesn’t get hung up on the Z-axis motor bracket. It gets real close to it.

Does this clamp have to be tide ? 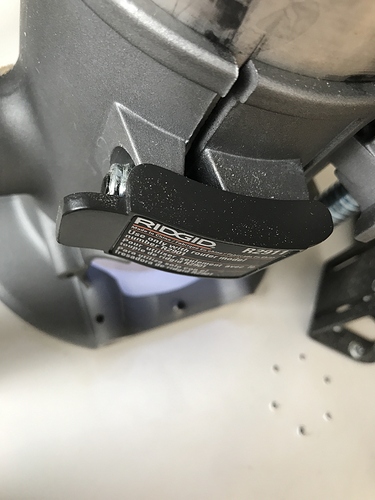 Clamped but the bolt loosened to the point where the router will move up and down as you adjust the z axis.

I’m having a similar problem calibrating the Z-Axis. I defined zero. It looked great so I decided to test a cut. I pressed play for a cut it made once already just to see if the bit retracted when it moved and lowered when it cut. Instead, when I pressed play on Ground Control, it didn’t stop pulling the bit away from the board until the router popped out of the Maslow ring. I’m using a Rigid as recommended by the maker. It didn’t appear to break the orange button/lever that allows you to adjust router depth, but I’m leery about that happening again and compromising/ruining the router. Yesterday, before I calibrated zero, it was threatening to retract the bit too far as well, but yesterday, I stopped it in time.

I put the router back together but didn’t try anything else until seeking help. It seems every step along the way, there is something new and non-intuitive happening with Ground Control. Any guesses what’s wrong?