I recently ran dry on projects, so I figured now’s as good a time as any to do some upgrades I’ve been considering for a while. These include a new z-axis, dust collection, WebControl, spindle control, and touch plate. I did a lot of lurking and figuring out what worked, and while none of the ideas here are new, I’m pretty pleased with my implementation and the fact that everything worked the first time!

The z-axis:
I used the C-beam without modification, though I had to completely disassemble and reassemble it, since it was not even close to properly adjusted. The pulleys and belts are essentially bolt-on - had to bore one out. I cut back and drilled new holes in the motor bracket to mount it on the back of the C-beam. I cut the router clamp from some 3/4" scrap pine I had laying around, alternated grain direction on the layers and glued and pinned them together. We’ll see how long it lasts, but at least now I can cut a new one with the more accurate z-axis. 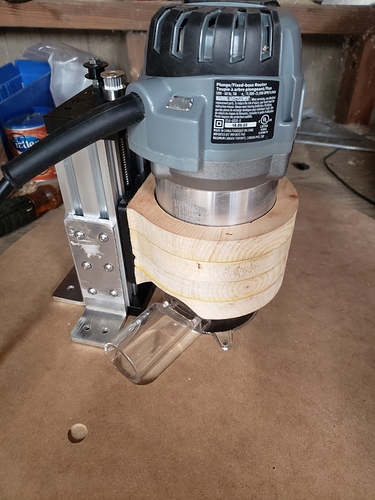 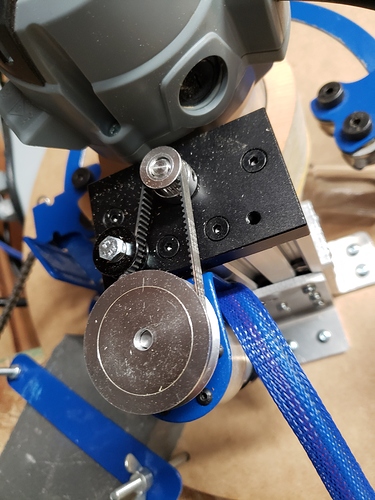 Dust Collection:
Put my lofting skills to use designing an adapter that connects my shop vac with the vacuum plate that came with the router plunge base. Why mess with something that works? The adapter is 3D printed in PET-G and fits like a glove. Now the wife wont complain about MDF dust all over the car. 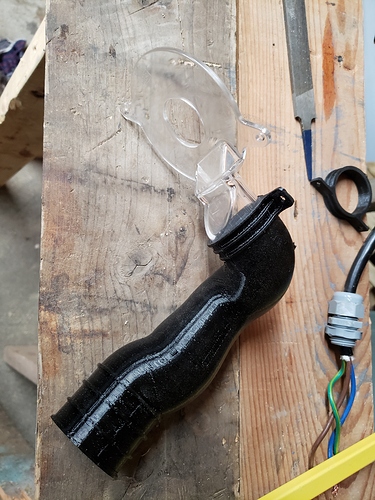 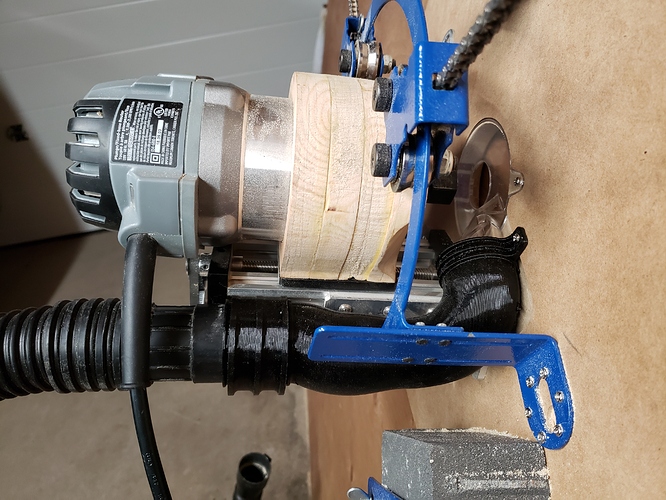 Electronics Enclosure:
Used all the freebies I got and moved the brain and added a Pi to a larger enclosure. Added spindle control via 15 amp optically isolated (non solid state) relay. I threw in the touch plate for good measure using some old CAT5, a couple magnets from and old hard drive and a steel ruler. If I had know those two add-ons were soooooo easy, I’d have done them long ago. 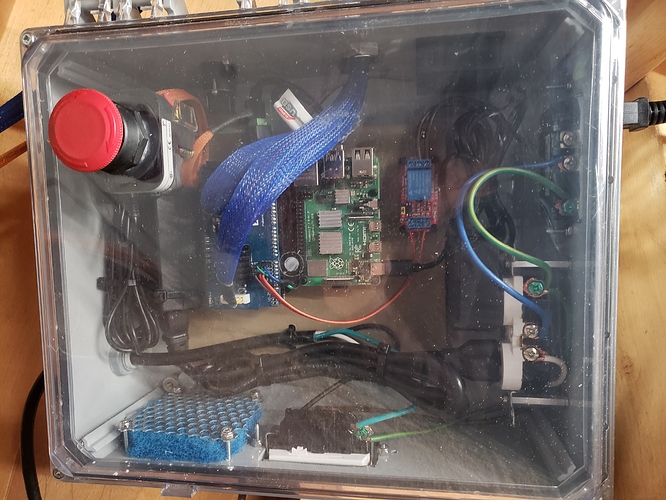 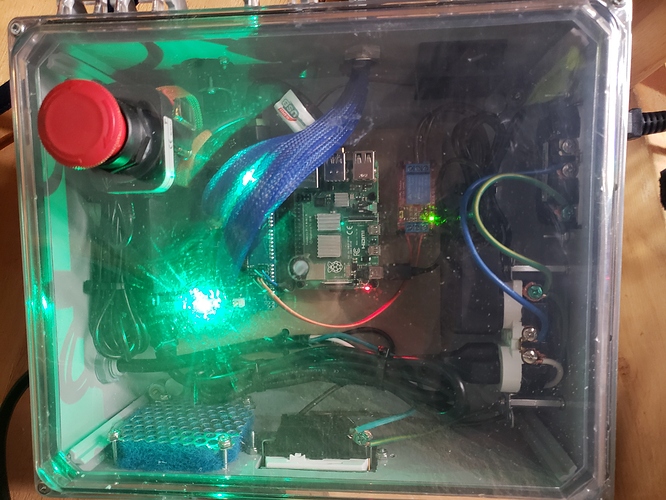 Now I just need some more things to cut!

Looks cool, what size are the pulleys you used and why such a large one on the motor?

What length is your C-Beam?

Any video of it running?

Thanks! I was using the Meticulous z-axis BOM as a reference since the pitch and lead on the lead screws are the same. It called for a 30T and 10T pulley set, but all I could find was a 60T and 20T. Same gear ratio. It gives a decent plunge speed.

The C-beam is a 200mm. I can’t see myself plunging more than the travel distance afforded at that length, and I wanted to keep the center of mass low. This is why I also flipped the z-axis motor.

Let me see if I can find a video that shows the z-axis in action. Stay tuned.

My endplates and router mount and bits arrived today and I’ve currently 3d printing some brackets to fit the C beam to sled.

A vid would be great.

Here is a super quick one of it cutting a tab. The other videos exceed the file size limit, so I’ll need to upload elsewhere and link.

This looks great. I like your clamp. How difficult is it to release the router? I find I am often pulling the router out to put in the regular plunge base for various cuts, then back on the maslow. I have the same pulley setup and it is great. Now you just “need” the laser-cut cover with buttons for your control case so you can start/pause/stop maslow jobs and shutdown the rpi from the front panel along with your mushroom emergency power off. Well done!

Thanks! I have another older router already that wasn’t a good candidate for the original z-axis, so I bought this on one super sale just for the maslow. The clamp has brass threaded inserts, so it probably wouldn’t be that bad to remove.

I do want the buttons (I left some space on the enclosure door for them), and I’ve been following your other posts, but I’m not incredibly Pi savvy. You use some kind of secondary program/service, right?

The secondary service is started by webcontrol, but you must run it from a development version of webcontrol or it won’t function correctly. The webcontrol branch is here.. There are plenty of pi savvy folks around to learn from if you have an interest. I miraculously got it to work, but there are some very knowledgeable people on the forum that can help out if desired.

side note: I can laser cut you an acrylic front panel with labels and holes for the buttons if you want for a nominal fee. PM me if interested.

awesome setup, VERY similar to what I’ve been doing! awesome to see more people thinking how my crazy brain does haha. The c beam z axis (probably depends on supplier you buy it from) that I have as a lot of play left and right (does yours as well?) so I’ve been working on replacing the internals to remedy that. I also replaced the router with a 500w spindle which is much easier on the ears. aside from that so far the cbeam is doing a LOT better than my previous setup. Do you have a link for that relay?

Thanks a bunch! I saw your build. It looks sick! Lightyears ahead my my storage frame.

My C-beam came from AliExpress. I. Believe it’s a copy of the open builds one. It arrived very sloppy, but I would have disassembled and rebuilt it anyway, so no sweat. I had to adjust the rollers, the anti-backlash nut and the end stops for the lead screw. Now it is super solid and I can’t feel any backlash. Depth error is less than half a percent on a 40mm plunge.

The relay is from a Canadian shop (local to me), but I’m sure you can find it elsewhere. If not, I have a second one that I could snap a picture of for you. I soldered on some solid 14ga wire over the 120v traces, because I just dont trust that much power over a trace on a PCB. I’m sure it can take it, but why the hell not? https://solarbotics.com/product/52262/

Thanks, I’ll check it out the branch.

Where can I find pics of the panel? I was thinking about just popping some holes in the lid of the enclose for the buttons. Also, I’m in Canada, so shipping will be a small fortune unless you are too.

pics of the panel are in post #7 in this thread.

I’m just south of your border. PM me and we can see if there is a workable option, but punching holes in your existing cover is certainly a functional possibility.

have as a lot of play left and right (does yours as well?)

the default gantry plates that come with most cbeams are too small , you just need to switch to a plate that has wheels on the outside to make it more sturdy 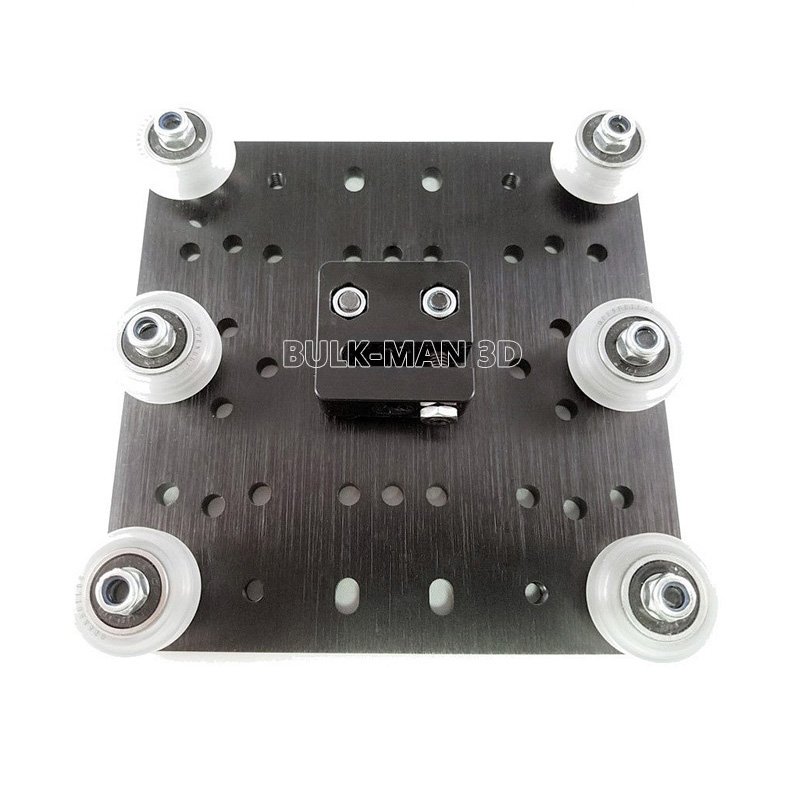 This Bundle is a great way to get all the parts for a C-Beam Gantry X/Y – XL . This Bundle allows two C-Beam Gantry Plates – XL to run along the C-Beam Linear Rail system perpendicular to each othe…