I’ve been using one of these tablets to control my machine: 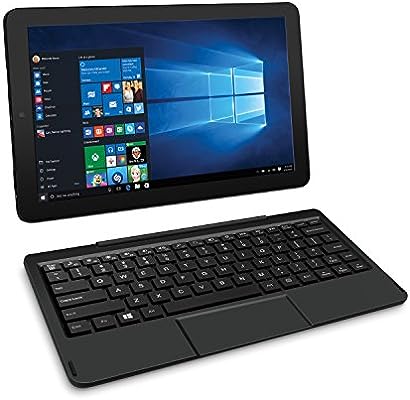 It’s a truly awful computer, the battery lasts 20 minutes tops, and everything else about using it is also terrible, but it was the cheapest windows 10 tablet I could find which had both a USB port and a charging port. Having a computer that I can dedicate to running the machine is really nice because then I can use my computer to do work while the machine tends to itself.

To keep the tablet out of the way I made a little stand that mounts it to the top of the machine so it’s easy to keep an eye on the progress of a cut and it stays out of the way. I use a shared dropbox folder to make it easy to transfer files.

I wanted it to be easy to remove the tablet from the stand if I need to so I made the the stand as two pieces attached with screws so the snugness of the fit can be adjusted by tightening the screws.

The screen is angled slightly forward to compensate for the tilt of the machine and to make it easier to see and touch because it is slightly above eye level. 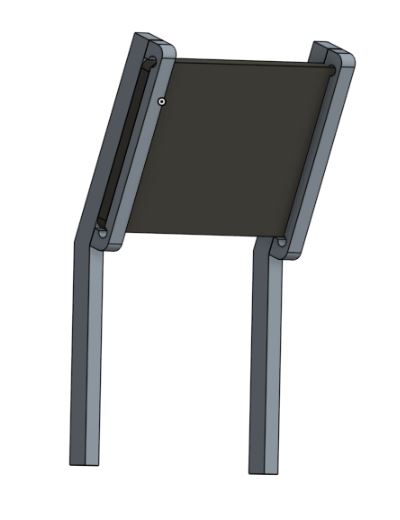 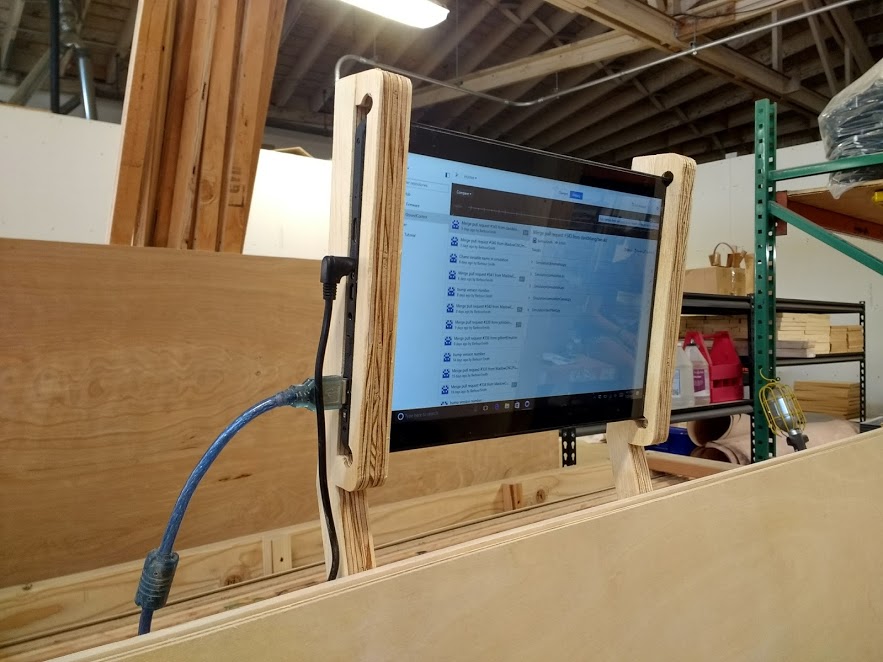 I’m pretty pleased with the results. The computer is snugly in place, but sliding it out if I need to is easy to do. It was a bit of a lark project because I just wanted less wires running across my desk, and it seems great so far.

That thing is awesome, I am inspired to make one for my laptop!

I am also amazed by that computer. I was thinking of a raspberry pi, and then buying a 7 inch touch screen for it. My first reaction to seeing your photo was, hah windows, I bet that thing costs a fortune. This is such a better answer.

Is the ram upgradable? I bet it has like none.

Though there is one good thing about using slow rigs. They they teach you to be patient.

No ram is soldered to board

That blows. Might wanna search ebay for a vista designed laptop. Some of them go pretty cheap and can run Windows 7.

Older computers used to use a watch battery to maintain settings (such as system clock). I wonder if a dead battery is causing your “25% battery” issue. Of course, I may be showing my age by suggesting this…

I found a used microsoft surface on craigslist for my computer. I chose a version that is fanless because I didn’t want dust to become an issue. Unfortunately, my wife got her hands on it before I put it into production so now I think I need to get another.

The cmos battery. Cheap to test and see if that’s the case.

Another note for those of you who like this and want it to be even easier for controlling w another machine - A VNC server tool (free to use) could be installed on the Maslow tablet then the VNC client installed on your other machine can control it remotely easily. The Dropbox is also needed for that file transfer but that would save moving to the other machine each time - and the VNC window can be used to view Ground Control in real time while you multitask other steps.

Reading my mind! Though I was wondering if I could VNC directly into the Arduino.

Yeah I wish the GC platform could get into IOS so we could repurpose more
hardware and make use of VNC versus having to find a windows machine. But
that’s a minor quibble.

I haven’t seen anyone give it a go yet

Thanks! I’m also realizing my own negative experiences trying to connect peripherals to IOS - like what sort of USB would I need to hook into the Maslow arduino that ends in a lightning connector. I once tried setting up external storage to my iPhone via the Camera Kit and it was always a wonky beast that was more hassle v benefit before cloud storage was around. Windows USB is definitely easier in that regard, and there’s much more CAD support in windows as well.

Luckily I had a pi3 and 7" touchscreen laying around and I’m now setting it up for Ground Control. KivyPi OS boots quickly about 4 seconds and Ground Controls “appears” to be pretty responsive.

I say appears because I haven’t built Maslow yet and I’m just fiddling around with the software.

I looked into porting to iOS a little bit, but being as much as 2 months away from receiving my maslow, have shelved any attempts until then.

The route of least resistance is via bluetooth as its the preferred means of serial communication in iOS. If people were to begin a port, that’s my recommendation of where to start.

One other thought here - if there was Chrome support, chrome books are very cheap and run pretty fast w the limited software suite. Again, you could VNC or remote to the book from your CAD machine, or Dropbox the files to the chomebook. This would require Chrome support for GC.

Yes, it’s an aweful tablet. I can’t imagine using it as a regular tablet, but as a touch screen controller that stays plugged in all the time it does OK and it was the cheapest tablet on Amazon when I bought mine