Today only from their anniversary

Here’s the ad image and copy: 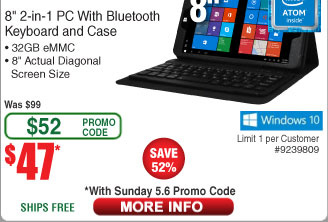 Wasn’t there concerns about the Atom Processor in other posts?
I get suspicious when linux gets mentioned as a possible source for connection loss, as it dosn’t match the experience I have with different ubuntu flavors and manjaro on my dell laptop. I would love a fanless system due to the dust and keep my eye on Atom mini pc, but if it can’t run a 8 hour job, it will be not for me.
@Bee You mentioned issues with Atom here. Ground control on Tablet? Did you get to solve it?

My suggestion is an I5 or better processor. However there are a group of folks here interested in sub$100 tablet controllers. I’m not convinced they are a good fit. For those that were interested I posted this when I saw it. It may be a case of finding the right OS. I don’t use my Atom based pc’s for direct control of any CNC machines. This is based on my observations of atom processors and another CNC machine and timing issues. These were not disconnected. I’ve seen the disconnections issue once in 1.11 firmware & GC. This issue is independent of the processor. From my monitoring of the forum it’s across a broad variety of CPUs , OSs and a issue specific to Ground Control.

My old dual core atom Intel itx motherboard (think it’s a D2550) runs LinuxCNC just fine, that’s the equivalent or better of the Maslow firmware and ground control together. Configured with interrupts on one CPU and programs on the other it has less jitter (timing variation) than many higher powered processors.

I use an Asus EEBOOK as my main computer which has an Atom processor, but it’s running windows