The Maslow Stool is my second project to cut after the fold flat chair. (And after changing the bungees for pulleys and weights.)

My workflow of importing the svg into easel, creating tabs, generating gcode, was pessimal (optimally bad) – it took 12 hours to cut a simple stool!

Here is what I did:
I imported the Maslow Stool SVG into Easel. I noticed, but thought nothing of it, that the imported SVG had been deconstructed into segments. I went through and added tabs, generated gcode, and pressed go! And it took four hours to cut the first piece of the stool! I didn’t realize that because the simple SVG had been deconstructed into many tiny segments, that the gcode cuts were going to be based on these many tiny segments. As a result, one arc of the Maslow logo which visually looks like one arc, and which actually was composed of five sub-arcs inside of Easel, turned out to be a bazillion gcode instructions. The bazillion gcode instructions were from each arc having four passes (first at depth .2 inches, second at .4 inches, third at .6 inches, and so on). The problem of course is that each of these Z-axis movements is incredibly expensive in time. So the maslow would cut 1" of a 6" arc at a time, with the eight Z-axis time penalties of each cut (eight because the tool starts at one end, sets it height, cuts, goes back to the safety height, and then goes back to the beginning and cuts again). 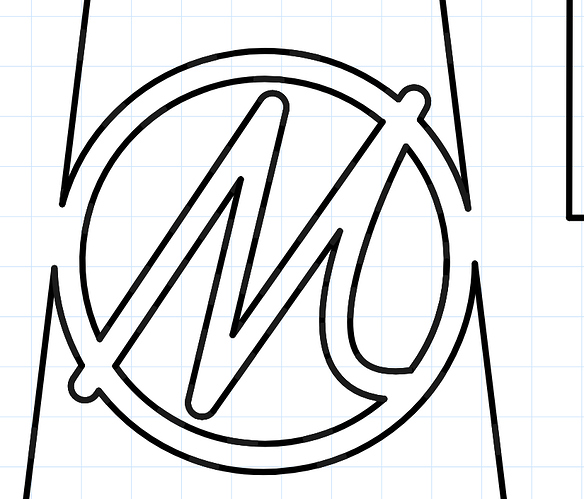 Here is a picture of selecting the bottom left of the “M” inside of Easel. The black line has blue segments of lines in it. 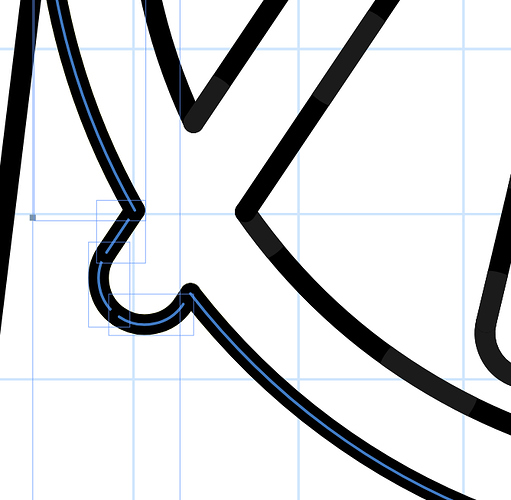 Just so we are clear about the blue lines I am talking about, here is a picture highlighting the blue arc segments and where there are joints. 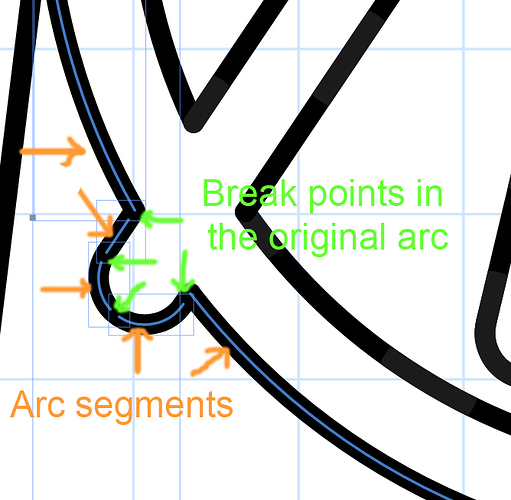 This setup generates ridiculous gcode. I have highlighted the sections of gcode in alternating colors (orange, green, orange, green) for each little tool cut. Each of these cuts requires 8 different Z-axis seeks (4 cutting depths times a Z-axis motion at each end). 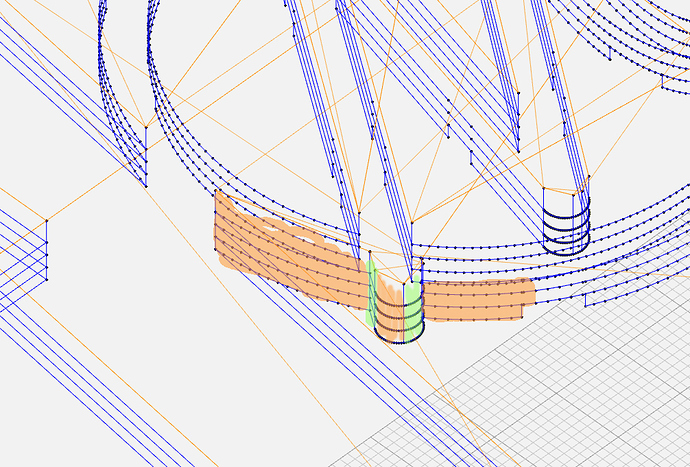 I was expecting Easel to “realize” that the tool path could continue down the blue line segments. I’ve highlighted the picture where I expected Easel to connect the lines (I connected them with green lines). If Easle had done this, it would have eliminated tons of time because there would be dramatically less Z-axis motion. 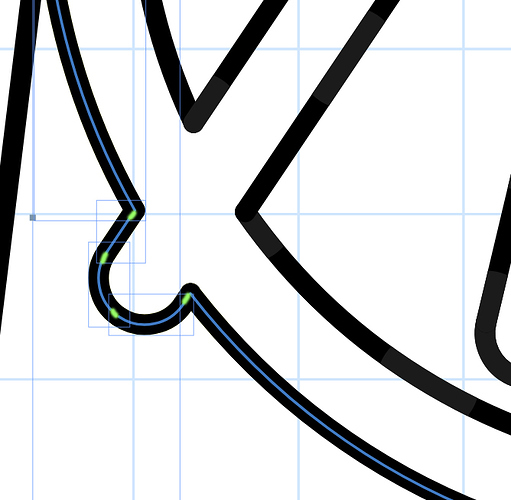 I had a similar problem with a DXF file import. Should I be using DXF or SVG?

I am 70% of the way through the Fusion 360 tutorial so maybe I will find out how to deal with these issues when I get to the end of the course. But maybe not…

Any help would be greatly appreciated!

What I do, is import the svg into inkscape and use the “NODE” tools to close all nodes or join ect which will consolidate the 5 arc pieces from your circle into one. Im not sure if this improves the gcode but it definitely tides up the svg and makes it easier to move around in easel

Ill link to simple videos that really helped me.

I have moved away from fusion360 now and use inkscape and aspire. I will revisit fusion but for now i find these to do what i need easily. Hope I’ve helped

not sure what router you are using, but consider upgrading the z axis motor to be about 10x faster. (12rpm to 122rpm) https://www.amazon.com/gp/product/B01MEGLCPL/ref=oh_aui_search_detailpage?ie=UTF8&psc=1

Will this “upgraded” Z axis motor work properly with the Meticulous Z (belt driven) design? I am building this and would consider changing motors if it will work.

What I do, is import the svg into inkscape and use the “NODE” tools to close all nodes or join ect which will consolidate the 5 arc pieces from your circle into one. Im not sure if this improves the gcode but it definitely tides up the svg and makes it easier to move around in easel

This is what I’ve done to fix SVG files. I’m fairly certain this would fix the gcode issues that @marlon61 is seeing. This is also what you need to do when Easel won’t let you select inside/outside of the path or fill. It’s because even though some of the nodes may overlap, they’re not actually connected so Easel just sees it as a line/path and not a shape.

Change the pitch settings until you get the right distance, that is what I did. Used a small ruler to gauge the movement.

explains how to modifiy software values, should work fine, if not amazon has a good return policy

from what i understand you can buy different sized pulleys for the Meticulous Z design to increase the speed of the Z axis. Iv just ordered everything to do this… a pulley would def be cheaper than a new motor.

whats Meticulous Z (belt driven) design? Im intrigued by this upgrade, anything to speed things up