MooseSled, or how (probably) not to do it

The 3 bar balanced from the very crowded mooseshop. Even if it doesn’t work it was fun to make, and easy to restore the sled to originality. All pivots are unsleeved 1/4-20 bolts, bought them by the pound over the last 30 years since I hate the one hour round trip to pick up that one missing bolt needed to fix the machine that broke during haymaking. There’s always rain threatening if the part’s not on the shelf or fixable with a big hammer, torch, and welder.

I don’t claim to have added anything to the other designs; thanks to @pillageTHENburn, @krkeegan, @ImpetuousWombat, @blurfl and everybody I missed. Likely it won’t work anyway and I’m not sure if it’ll clear the router. Mine router has little pry slots on the handles so with luck they’ll be fairly easy to remove, and will probably hit anyway. Maybe it’ll be good enough to cut V2 in the center of the machine. Maybe I’ll give it a try tomorrow, maybe after Wednesday’s shift, depends on finding longer bolts to mount the router. 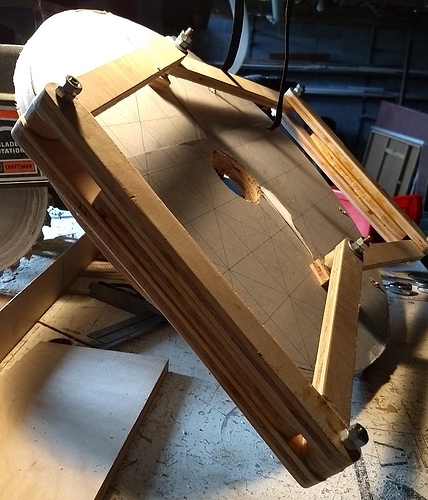 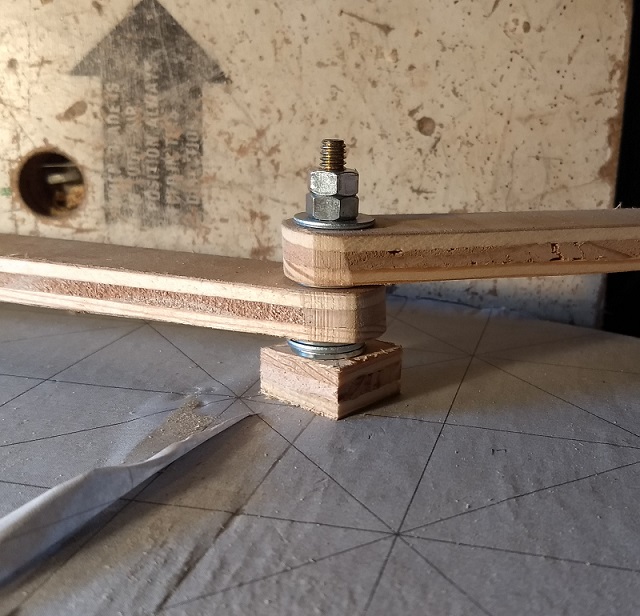 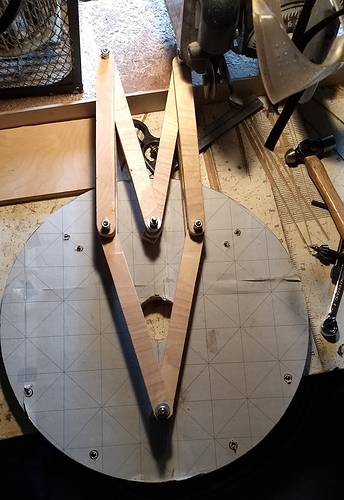 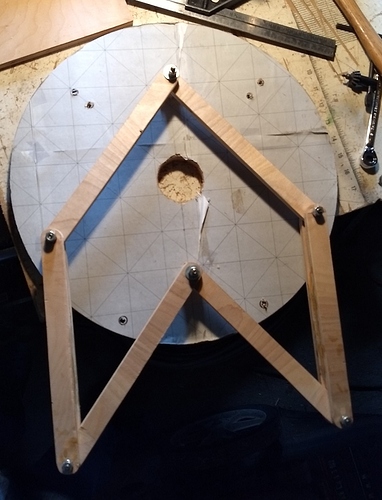 Looks great. I think you will be pleasantly surprised how well it works.

Mine router has little pry slots on the handles

Mine did too, if it is a Ridgid model, I promise you after messing with it for 5 minutes you will succumb to drilling them out. If I ever put the handles back on, I won’t put them back and I don’t think it will make much difference.

I’m planning to buy another for the shop router, if/when the shop project ever gets done.

Autocorrected something into mine router. We have lot of mines up here…

Curving the lower arms to miss the router shouldn’t be too difficult, what with all this F360 learning going on. Not too sure how to mount the bricks, need to see it go through it’s travel range first. Maybe by then somebody will have a better sled design.

The table saw became a storage area so the radial saw had to do. The clamped down stop moved so the arm width varied somewhat.

I think we want to space the pantograph arms out from the sled so that they are
at the balance point for the sled. I think that gets them clear of the bricks

I am not following the purpose of the bars/pivots on either side, please explain!!! I am strangely curious but just don’t get it. I (just keep thinking the the chain brackets will be in the way along with the bricks, and cant get past what it may be intended for)

They have the same effect as the ring/bearing approach. the chain ends are
always pointing at the bit and are always the same distance from the bit.

This means that the firmware doesn’t have to worry about the tilt of the sled,
which is a massive simplification in computation, and (we think) a significant
improvement in accuracy.

the chains attack to the center of the bars in the ‘balanced’ approach and the
bottom edges in the ‘top’ approach.

So I was able to get my arms attached without any range of motion issues while still using straight arms. I admit it is close, but it certainly works. All arm lengths are 10 inches in my version.