Ok, I am not very versed in all of this and trying to set up and calibrate the Maslow. I’m sure this will seem pretty basic, but I couldn’t find anything on the forum.

I built the basic frame and hooked up the electronics as instructed. When going through the calibration process, the left motor operates when trying to set the right within the software and vice versa. I swapped the plugs and corrects the l/r issue, but the left motor won’t turn in small increments (the motor will operate for like 10 sec at a time). I am reasonably sure everything is set 100% accurate, as instructed. As I understand it, the motors as identical and should operate the same.

Is there a way to change the left/right paths within the software? Otherwise the wires will be crossed at the Arduino, but I guess that doesn’t matter if I can get it operating correctly.

I am drawing a blank on how to correct this. The only thing i can think of is that I didn’t set up the z axis, maybe that’s an issue? Any help is very much appreciated! Again, not super smart with all of this, so thanks!

I’m pretty stumped too. It does sound like the wires are crossed. The shield is designed so that when it is mounted to the back of the machine the “Maslow” logo should be upright and then the wires should not have to cross.

That the motors do not operate continuously sounds like a separate issue. Does the led light to indicate that the board has power stay on or go off with the motors?

Are you saying that this happens when trying to set a tooth of the sprocket at 12 o’clock? That it keeps turning for 10 seconds rather than a short pulse?

Welcome, this is new for me. 2 options to help narrow things down are:

Yes, there is a missing ‘r’ in electonics, but till date not an issue on GitHub.

Thanks for the info Bar That might be my 1st stupid mistake…Maslow logo up and facing towards the wall or facing you?

If I just have the thing oriented incorrectly, then that would explain the motor reversal or wire crossing.

Madgrizzle: Yes, but only if I have the wires routed based on what motor the software thinks is the left one (ie looking at the machine, left motor controlled with left controls in the software). And only its in this configuration. If i swap the wires, each motor moves incrementally, but just opposite of what the software is saying it is controlling. Does tgat make sense? Pretty wordy, i know.

Thanks for the input everyone! I will have some time to work on this tomorrow night and over the weekend, so hoping to get it up and running 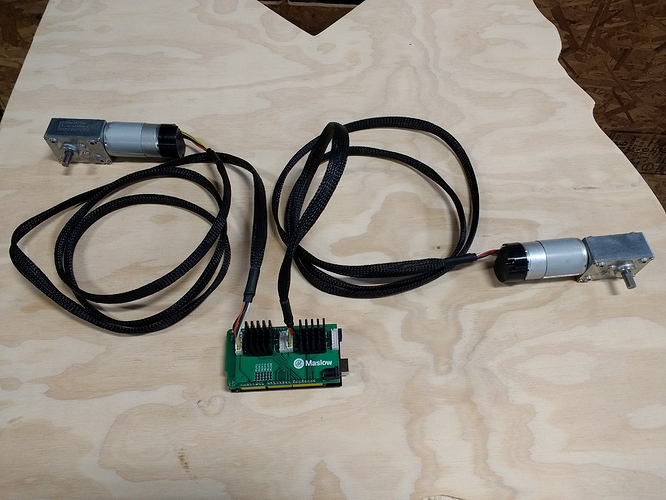 When you stand behind the Maslow, the logo should be oriented correctly (readable) and facing you. It should look like what you see in the picture. The right motor in the picture is actually the left motor, and vice versa. When facing Maslow from the front, which is the perspective of the ground control software and firmware, the right motor is Port 1 and left motor is Port 3.

Ooooookk. Got it together and working. Thanks so much for everyone’s input.

My main issue was that I had the shield oriented backwards and set up the electronics that way. I just correctly connected the motors and then reinstalled the firmware. That fixed both of the issues. The help is very much appreciated!