My Maslow Journey - A newbie's Experience

After two and a half years of sitting on my Malsow, I finally worked through all of the projects ahead of it and it is up and running. 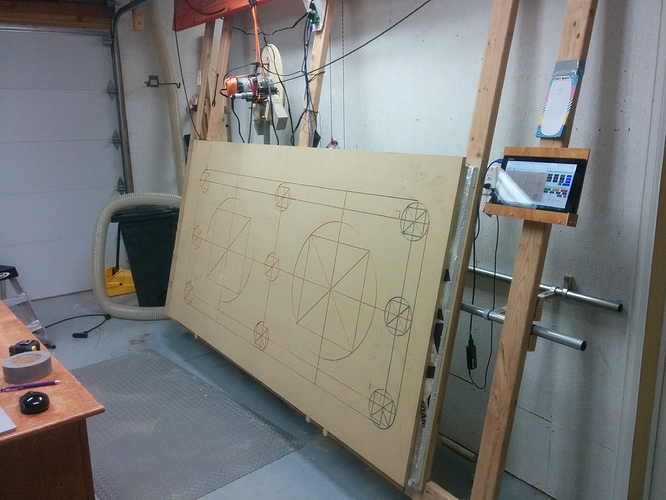 I wouldn’t have been able to build it without lurking on this forum and learning from everyone elses experience.

I’ll detail the steps I took and try and record all of the different data points I gathered from various spots so that it is one place that will hopefully help someone else down the line. All of this will be written while waiting for future cuts, so it may be a bit sporadic.

Someone on Facebook asked for the test pattern gcode. It is attached with the dwg and svg file for anyone who wants to use it. The G-Code is set of 1/8" depth and a 3/16" bit. It was set to cut in the center point of the lines, so I think it will be fine with any bit.

I’d add the svg, but it seems to be impossible to attach. It keeps showing me a picture of the file instead.

I made my measurements and found that a couple of lines made it difficult. Here is version 2 of the test cut pattern. I haven’t run it yet.

For those interested. Here are the measurements from my first cut from the left hand side and top side of the board. I forgot to center the board before I started, hence the skewed numbers. It looks like I’m within a couple of mm for all measurements.First Cut Measurements.pdf (377.5 KB)

There are lots of questions about the frame on the Maslow forum. I think that David Lang summarized it best in one post when he stated that most of the details don’t matter. As far as I can tell, these are the most important considerations:

If your design meets the criteria above. Just start building it.

I knew I wanted my Maslow connected to the wall so that I could move it out of the the way when not in use, but I didn’t think I could use a 12’ beam because the only available wall was 11’ long. I bought a 10’ uni-strut and started mounting the motors on the top of the C. I had extra long screws to go through both sides and realized that I bent the sides of the C together. I filled the gap at the motors so that they wouldn’t bend in the future and was ready to start building the rest of the frame.

If you are going to use uni-strut, make sure that the C channel is supported so you don’t bend the pieces together and warp them.

thanks for documenting this, great job so far.

I had some friends over and we started work on designing the frame. I hate construction lumber and we decided to use as little as possible. I finally chose a lvl beam for the top to make sure the motors didn’t change while in operation and to be the primary strength of the frame. We thought we could use it and a sheet of MDF to fight the construction lumber and keep everything as true as possible.

We built a basic rectangle with vertical 2x4’s in the middle and edges of the mdf, and then two more 8" to the left and the right (the width of my wall) so that I can add supports for cuts all the way to edge in the future.

Then we measured the horizontal distance between the boards and made identical top and bottom cuts between boards to keep everything square. The horizontal boards were inserted between the vertical boards and bolted together with pocket screws. We weren’t worried about strength because that would be covered by the mdf and lvl wood.

We screwed the mdf to the boards in the center and sides, then cut two identical boards to match the distance we wanted between the top of the mdf and the bottom of the lvl. We placed the two boards on top of the mdf, lined up the lvl to the boards, and added a couple of long screws through the lvl and frame to keep it in place for the next step 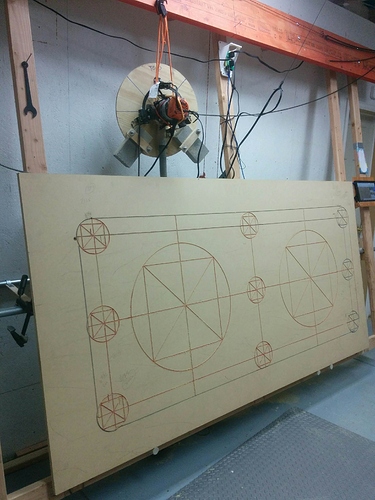 I drilled 1/2" holes through the lvl and frame every 2’, or so. I glued metal inserts into the holes so that I could move the motors out and in based on the material thickness used without worrying about the bolts eating into the holes and taking the lvl out of square with the mdf. I bolted it all together with carriage bolts and wing nuts.

I started with the wingnuts facing out and realized that was a problem because the chains would probably get caught on the nuts. So I took them out one by one and reversed them.

I then bought some 1 1/4" dowels and a 1 1/4" hole drilling bit and drilled holes every 4" along the bottom of the mdf, making sure I lined the drill up exactly each time so that the material would be level with the mdf.

Now I can pound in dowels wherever I need to support material. I drove a couple in, added the foam backboard and some 3/4" plywood, then flush cut the dowel to the material

I made my measurements and found that a couple of lines made it difficult. Here is version 2 of the test cut pattern. I haven’t run it yet.

Thank you so much for developing and sharing this, it is really appreciated.

We went to Lowes and Home Depot to look for a good system to mount the frame to the wall so that it could pivot out of the way when not in use, and have the 15 degree angle when in use. We decided to mount a 10’ chain link fence top rail (https://www.lowes.com/pd/Galvanized-Steel-Chain-Link-Fence-Top-Rail/999989216) and mount it to the frame with some tension straps. (https://www.lowes.com/pd/Blue-Hawk-Gray-Metal-Fence-Tension-Band-Chain-link-Fence/3160585).

I took some scrap 2x4 pieces and cut them about 2’ long. Then I used a hole-saw, jigsaw, or bandsaw to cut a u shape notch on the top of one side. I mounted the 2x4’s with the “u” facing the wall and facing the roof with some ledger bolts through the 2x4’s in the wall. 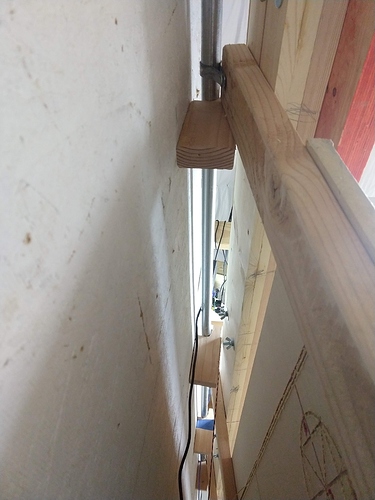 Amazingly, it was perfectly level when we lifted the frame into place. It lays flat against the wall when not in place. 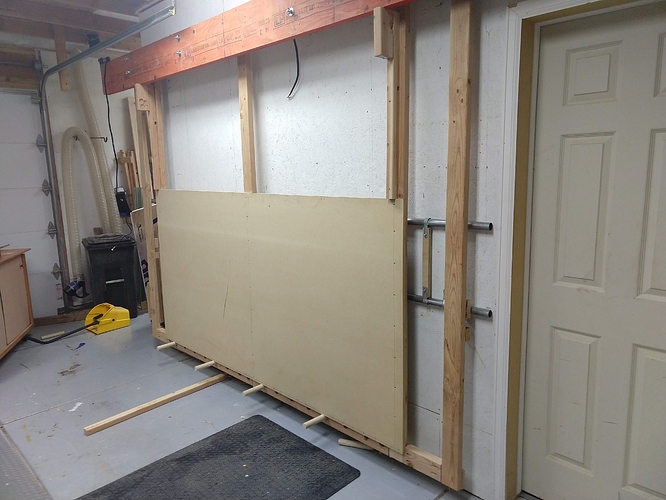 Like the low profile of your design. I am using the concept in my own wall mounted unit.

One concern I have is that the lower one half of the work area is cantilevered over the pipe arrangement when the unit in the working position. It is very likely that the frame will deflect around the pipe support point of contact. This would have a negative impact on Z axis accuracy and if severe affect the movement of the sled.

Have you found this to be true?

I think you’re over thinking it. The weight at the pipe would have to be extreme to warp 5 2x4’s and the entire 3/4 mdf sheet. Also remember that you should be cutting on waste foam board, so any potential warpage would be cushioned by the foam.

I put my 4’ Veritas Aluminum Straightedges on it out of curiosity and its dead flat.

the sled rides on the surface of the material, so even if things warp a bit (and
most plywood isn’t perfectly flat anyway), you are still referening the top of
the workpiece.

Once the frame was built, it was time to build the sled. I’ve never been a fan of having an un-calibrated machine cut out the sled for me, so I went to the big box store to buy a round table top or seat. They didn’t have any of the right sizes, so I found these pieces on etsy. https://www.etsy.com/shop/ChristianWoodsTM?ref=yr_purchases. There are a bunch of sizes from different vendors.

Once the base arrived, I downloaded the sled files at http://maslowcommunitygarden.org/Maslow-Ring-System.html?instructions=true. Then I imported the 2d sled files into cad, made sure the scale was correct, added some lines so I could find the center of the sled, and then had the full sized sled files printed at Office Depot for $3.

I found the center of the sled (https://www.youtube.com/watch?v=UUL24IdUrkU) and pinned my drawing in place.

I believe the entire sled weight was 24 lbs.

Now that I’ve played around with it and made some cuts, I would highly recommend that you start with some form of the meticulous z-axis for a couple of reasons:

You don’t need a Maslow to make the The Meticulous Z-Axis. Download the files and look in the 2d files folder. You can use these files to get a full scale drawing of what needs to be cut and make it with hand or power tools. You can also use those drawings to place the screw holes to get perfect alignment.

One last thing about the original sled. I found the center of balance by throwing a rope over the studs in my ceiling about 10’ apart and hung the sled by the rope. I adjusted the ring until the sled base was roughly vertical, then tilted the top 5 degrees towards the base. On my original sled, the ring screws were near the top of the bottom ring slots.

The ring ended up being set at the highest level after I installed the The Meticulous Z-Axis, but the sled was still top heavy and tilted back in the opposite direction. I added 4x4’s on the bottom sides of the met-z, which helped a little. But I ended up having to add some extra plywood on the top of the sled to get the correct orientation.

I’m still not happy with how much out of balance it ended up being, so I ordered a new sled from the folks at Metal Maslow and hope that will balance out. https://www.metalmaslow.com/product/200mm-lead-screw-lead-axis-kit-orange-router-blue-ring-and-z-axis-motor-not-included

Building the Met-Z axis was pretty straight forward. I downloaded the files here http://maslowcommunitygarden.org/The-Meticulous-Z-Axis.html and purchased all the products in the buy list.

I bought some fancy Baltic Birch at Rockler (which I don’t recommend) and started working through the files. I already had a sled, so I wanted to modify the cut pattern. Now that I have more experience, I would open the pdf files with adobe illustrator, save them as svg files, and then import them into easel of fusion (now that I know how to use it), but I didn’t know that workflow at the time.

I opened the dxf files and found that something happened to the scale. So Spent a lot of time rescaling to match my sled, exported the new dxf files, opened them in adobe illustrator, save them as svg files, then import them into easel, built my g-code, and cut them out of the sheet.

Looking back, I should have just cut it out by hand. It was almost as much work as modifying everything to fit on my existing sled. The weight/balance issue makes me thing I should have used regular plywood and maybe even 1/2" instead of 3/4".

I uploaded the 3d print stl files to https://www.treatstock.com/ and had them printed (ABS) and delivered to me in Denver for $46.36.

I had some Plexiglas hanging around, so I printed the shape to scale and cut it out on the bandsaw. I used a forstner bit to cut out the holes in the center of the plexiglass.

I had to google how to insert the threaded inserts, but it turns out to be really easy.

I’m curious if the thickness of the sled would drastically affect weight, but I think if using the rigid router, it might get you some depth if cutting with and 8th inch bit. I’ve considered countersinking a router base into a sled to get more z penetration, but a thinner sled would simplify that. I opted for a meticulous and so that is no longer an issue. Depth is now limited to the length of the bit because the collet will rub the workpiece or even lift the sled if set to plunge that deep.