Hi, I’m two days into owning a Maslow purchased via Facebook Marketplace. I upgraded the firmware, ran the calibration procedure, all that good stuff. I went to cut the test pattern I found here, using the .nc file in that post. It went… poorly. Some portions of the cut were perfect, some were way, way off. Pics attached. I’m hoping that I screwed up the calibration procedure, and re-running it will help. Thoughts?
Thanks 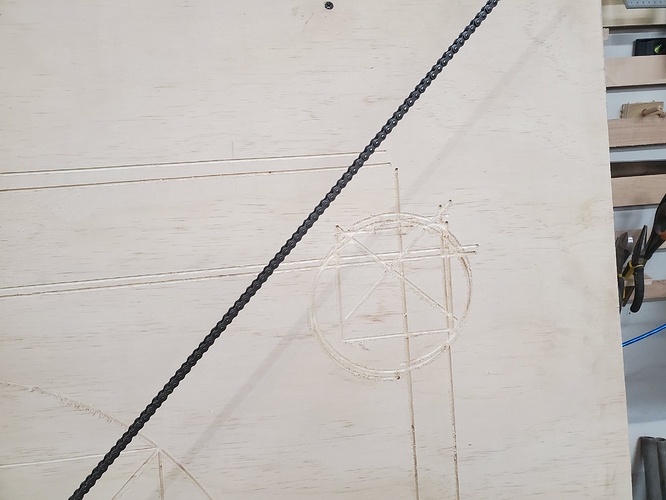 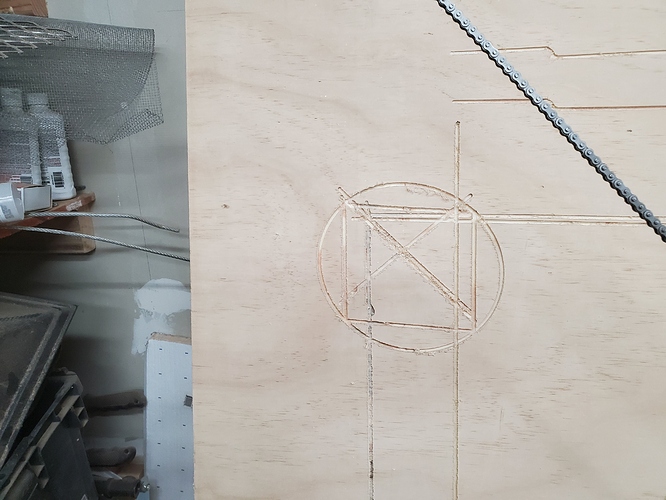 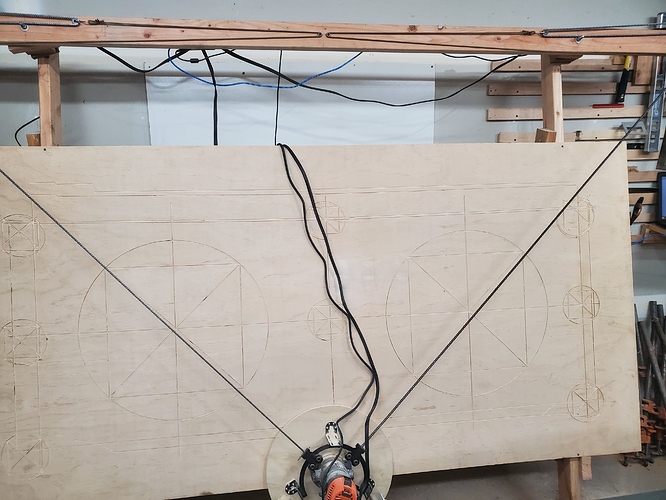 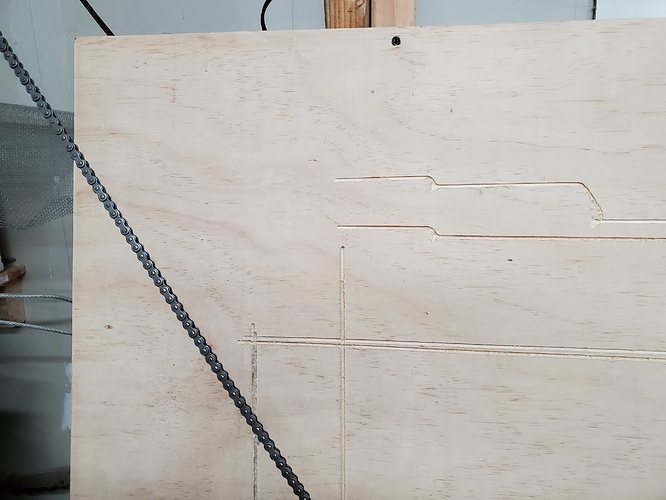 Did you cut the test pattern that is built in to groundcontrol? The one where it cuts corner marks that you have to measure?

The top right cut looks as if the chain may have skipped a tooth. Even if you calibration is way off; the start and end of a cut should be at the same point. The shape will only get squished by bad calibration.

Cut the first part of the test again on the same sheet. If new wood is being removed then you chain has skipped.

Do you remember the order in which these shapes were cut? It looks like the top left skipped a tooth after cutting the square and before cutting the X. It then probably skipped again when cutting the X in top right.

If it did skip a tooth you will have to run the chain length calibration again. Before you cut anything new, move the sled to each of the corners (with router off), and listen for any noises from the chains. A little noise is normal but grinding or sudden thunk noises indicate that motors may be out of alignment. The top corners cause a lot of slack in the chain running across the top of the maslow. You may need to shorten the bungees to get more tension.

Make sure that the chain is not rubbing on anything when the sled is in top left or right corners. You could have problems with:

Post pictures that show the whole top bar and close ups of the motors.

Hi Tinker, thanks for the reply. I hadn’t realized there was a test pattern built in to GC, it looks a lot simpler. I think this one definitely overcomplicated things. I’m going to flip the plywood for the fresh face, re-calibrate, and cut the built-in test pattern. I’ll update after that’s done.
Thanks!

Make sure to cut the same pattern over your current one first so that you can tell if the chains skipped.

Ok, I’ve found several mechanical issues I need to get taken care of: the frame’s out of level, at least one of the sprockets is loose, etc. I’m going to straighten that stuff out and see where I get.

I wonder, is there a “tune-up” procedure/checklist somewhere? Like #1, tighten allen screws on sprocket, #2 check for level, etc. As peoples’ setups age, or like me, people buy ones that are already set up, but get transported in the back of a truck for half an hour, I imagine little issues like this might increasingly pop up…

@tkpunk this isn’t really a “tune up” checklist but it lays out the ways errors come up pretty thoroughly and can help catch a couple things like that. If you compile a checklist overtime though you should definitely share it. a way of keeping track with the small upkeep tasks would be really useful

There is a lot of variation in the characteristics of wood regionally and even more globally. Metal strut has variations between manufacturers as well. None of those would be needed if the frame was built rigid enough to not deflect. That’s not too much to ask of a user. Firmware with too many variables is very much harder to configure and to support.

Thanks, I’ll check that out!

the frame’s out of level

Oof, that’s a big one. Worksurface must be parallel to top bar. Frame should be level to ground so that weight of sled is equally distributed between left and right motors.

Thanks for updating us on the issues you found.

Yeah this one actually changes calculations and should fix circles that are not perfectly circular and squares that are cut as slight rectangles.

Okay! In much better shape now, but could still use some improvement. I leveled the frame, and tightened up my loose sprocket, and re-ran calibration… several times. The very first time, I had apparently messed up the calibration after the z-axis portion, so wasn’t actually going through the full procedure. Got through the initial calibration in good shape, and moved on to the Calibration Benchmark thingy. It’s a whoooole lot better than my original. I come out to a score of 1.7956 - .225. Actual numbers are below. Primary issue seems to be in the vertical. Any thoughts on how to improve would be appreciated. Or perspective on how out of whack this really is…

@tkpunk Not familiar with the table of data you provided but I think the expected distances should be 1905 x 900. The Calibration Benchmark takes the actual measurements you provide, and compares to expected, then works out the scale ratio and adjust the Maslow so that going forward it will cut 1905 x 900.

I don’t think you need to do anything else to calibrate. Cut a test square and measure the X Y dimensions. If they are the same then you are calibrated.