This design is an el cheapo version of Meticulous Maynards sled and z axis. Since i had a 3/8" acme threaded rod and nut already i decided not to spend the $30 on a z axis, although by the time all was said and done i maybe saved $5 and endedup with not quite as nice as if I’d bought the ready made z axis. Anyway here is the first version: 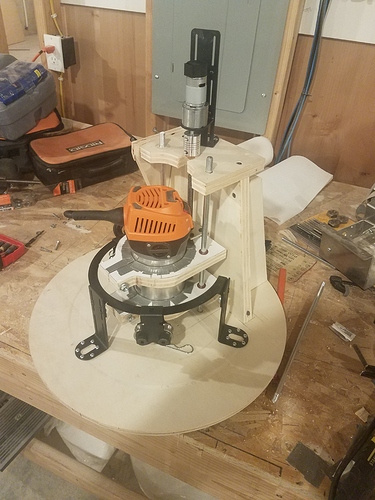 There were 2 big problems with the design: 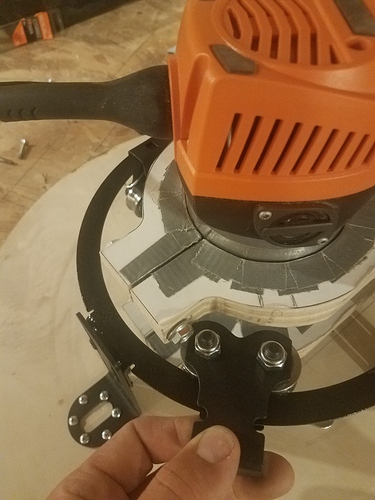 So i redesigned it and here is the result: 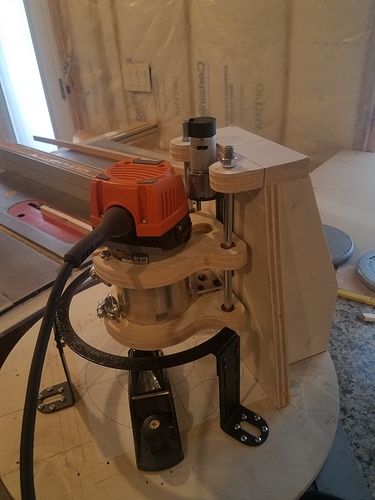 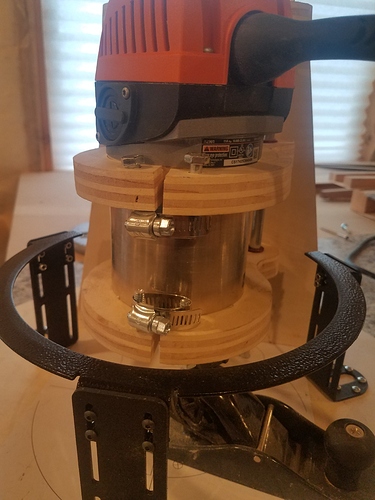 To tighten the plywood clamps to the router i inserted 2 bolts and used a hose clamp to snug it up. Honestly not sure how well this method will work but we’ll see.

Thanks for sharing your process. If you put a z-axis on the hand plane, you can have a dual-action CNC router/planer!

I considered adding a comment about the hand plane just being there to hold up the carriage for the photo since the threaded rod isn’t installed yet but decided not to. Just goes to show you can’t take anything for granted around here

Yeah, I figured that was what it was there for, but I couldn’t resist! 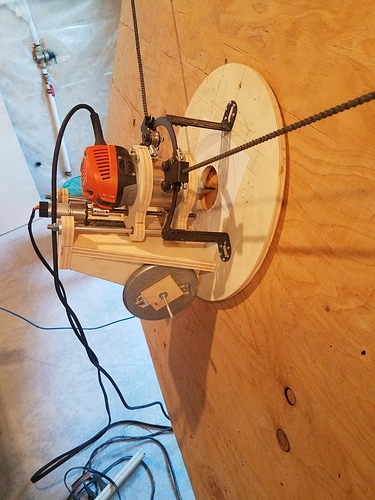 Finally finished it!!! And did the calibration pattern with it! Z axis seems to be very consistent. I’m still not up to speed on the software side of things so i can’t cut anything else like circles to test it but overall it was really cool to watch it just do that simple calibration pattern.

Your chains on the sled seem high. In what direction does the sled tilt if you hold the chains by your hand? Bottom towards the sheet?

I don’t understand exactly what you mean by “hold the chains by your hands”? With the sled in the home position if i grab the chains a few inches from the ring then yes it tilts bottom towards the sheet. If i pick up on the sled by the rear legs of the ring it seems to balance at the same angle as the spoil board which to my mind isto be expected considering the weights bolted to the bottom.

if you pick up the sled by the chains a few inches from the ring, then you want
it to hang straight or tilt slightly forward (approximatly matching the angle of
the spoil board)

picking it up by the rear legs of the ring means nothing.

Ok, i guess I’m going to be lowering the ring significantly. I keep looking at those weights and thinking the way they’re mounted is contributing to that rearward tilting tendency.

Ok, but as you can see I’ve only got maybe 1/4" more i can move the ring up. Am i correct that the weight being mounted the way it is, is contributing to the rear leaning tendency?

The only other thing i can think to do is take a spacer block out of the top beam mount and that will angle the chains towards the spoil board a little more.

Am i correct that the weight being mounted the way it is, is contributing to the rear leaning tendency?

I would say so, yes. Getting as much of the weight down to the surface of the sled will help the most.

Ok, but as you can see I’ve only got maybe 1/4" more i can move the ring up. Am i correct that the weight being mounted the way it is, is contributing to the rear leaning tendency?

Yes, that sled has a lot more weight high up.

The only other thing i can think to do is take a spacer block out of the top beam mount and that will angle the chains towards the spoil board a little more.

you want to get the ring to the balance point where the sled hangs level (or is
slightly tilted forward) and then move the top beam to where the chains are
parallel to the workpiece.

The chain is actually pretty close to parallel right now maybe 1-3 mm off from 1 end to the other and that plywood is very light stuff, as plywood goes anyway. Think maybe i’ll cut some lightening holes in the top to see if i can lower the cg and see what I can do with those weights. 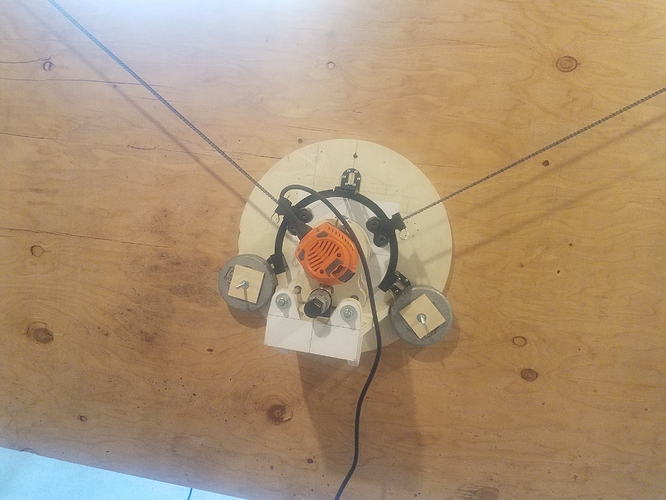 Fortunately the fix was fairly simple. Haven’t moved the ring yet but now it pretty much hangs parallel with the spoil board with maybe a slight bias towards tipping forward.

That looks like a good solution, your description of how it hangs sounds just right.

what is the total weight of the sled (including the router and weights)?

Honestly don’t know. Unfortunately i don’t have a scale capable of weighing it. Its got 10lbs of weights (4 × 2.5 lbs) it’s my understanding that the bricks weigh approx. 5lbs each and as mentioned previously the plywood is very light. I suspect the gantry and carriage weigh maybe 3 times as much as the rigid router base with maybe a pound extra for the steel rods and acme screw. So while i imagine it probably weighs a little more than the stock rigid router with z axis setup it’s not much more. Also i only use one of the brackets supplied for the z axis motor mount so there’s another small weight savings.

I haven’t put a square on the squares yet but they are not noticeably out of square. So for the most part I’m pretty happy with those results considering i wasn’t quite as careful with my calibration as i could have been. If i was scoring myself on the calibration and the effort i put into it I’d probably give myself 80-85%.

I must admit to being pretty disappointed with the middle vertical score, a whole 7mm off. There’s a couple tricks i need to implement namely:

Not sure if my router is precisely centered on the sled. I tried the spin test but i could feel the bottom and the ring sticking. Even so it was pretty close.

Anyway that’s where things stand with my setup right now.