Since I ordered the Maslow CNC, I couldn’t wait to start. However, with most of things it is better to first read a bit before doing. So I read a lot on the forums, checking some youtube videos, wiki and the garden on all type of topics: hardware, software, z-axis for bosch, …

So about two weeks ago I received my package and started right away with putting together the boards and loading the software onto it. Since I’m used to arduino, this was not really difficult for me and these steps are very well documented (95% of the whole process is well documented in fact

).
I also opted for the Bar’s Bolt design. I like the fact that I can easily de-assemble it and set it up at another place. My wife is looking for a new house all the time (although I don’t see why… I think this house just fine…). Yesterday I went to the local woodshop, ordering the necessary parts and this noon everything was nicely delivered!

So where am I going to put the Maslow? I can go for the garage or the basement. Garage is more practical, but already taken by the wife. Seems freshly washed laundry is not compatible with dust and she doesn’t want to migrate to the basement. So prepare the basement: 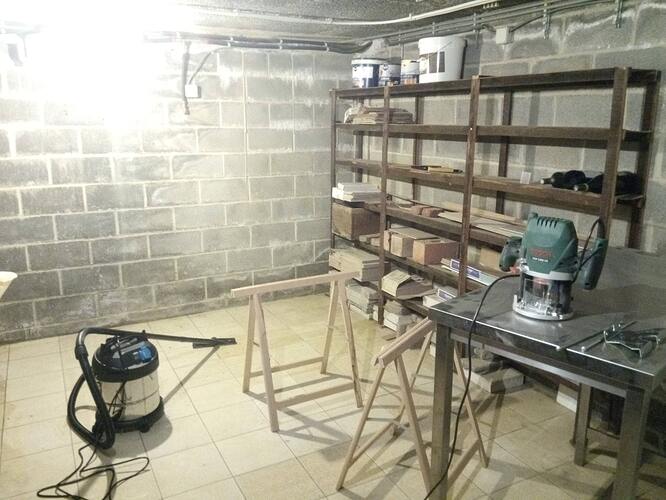 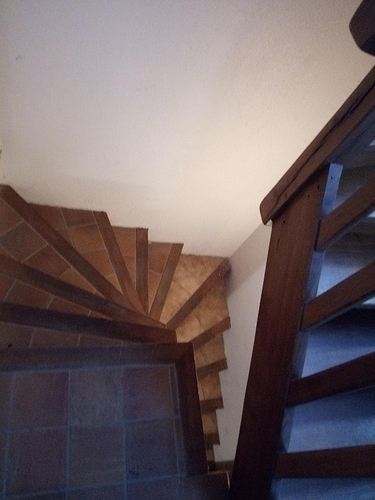 IMG_20180731_1323003120×4160 1.5 MB
No photos of the process, since I had my hands full… Also big thanks to my 9 month pregnant wife who helped a bit (she hoped the contractions would start of the effort, but the baby is still in). And yes, first miracle of the day: the sheets are downstairs! Definitely the hardest part of the day.
Start drilling the holes: attention for the pitfall of drilling the holes straight. I’ve read a couple of solutions and opted for the one using a 90° tool (some aluminium square I had lying around). The length of the tool was not sufficient, so I had to drill also from the opposite side… Tricky, but two times nearly perfect! The backup plan was screws and glue, but it was not needed 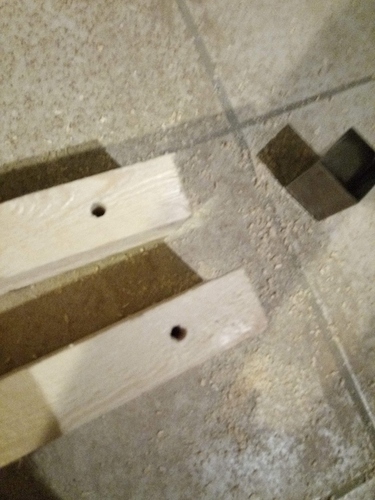 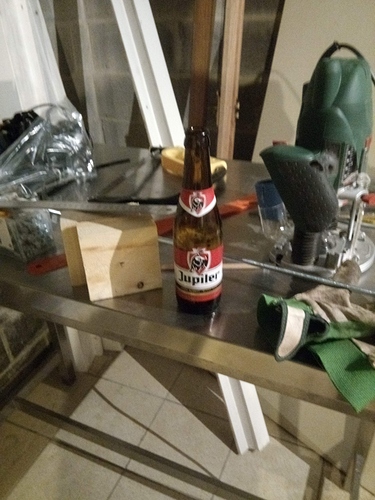 IMG_20180731_1505383120×4160 1.39 MB
Put up the frame, but there was a small pitfall: I don’t have enough room to mount the motors onto it… Ceiling is a bit too low. So very important lesson (and a bit of luck for me): check the height of your ceiling and mount the motor before putting up the frame.
Then the temporary sled. Lessons learned: I first created the old sled. the ring won’t fit on that one…
Ok and now the hard part: fitting the z-axis on my bosch pof 1200 ae. Definitely needs another type of beer! 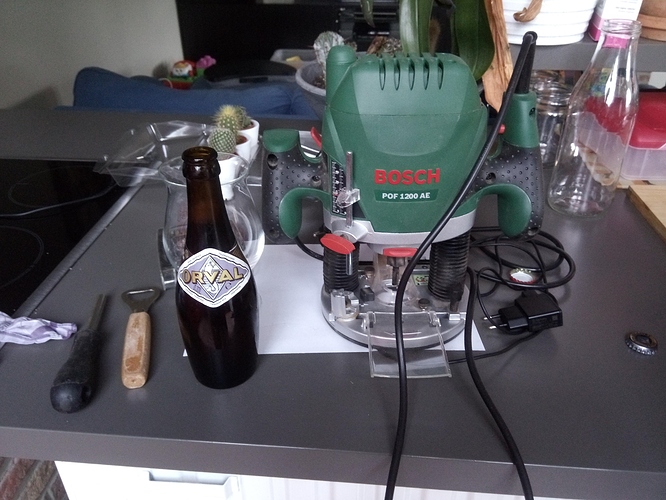 Later on the evening, after writing the first part, I started tearing apart the bosch using following guide. Personally, the most terrifying part for me, but hey you need the Z-axis and it is all about learning some stuff. Putting back together is quite straight forward. Needed to adapt a bit the kit of Dag83 (holes were a bit off, so dre
meling until they are ok). Don’t worry, I informed Dag83 and he will make sure everything is correct on the following batch.
Edit: during calibration my Z-axis kept popping out. It’s best to fix the cylinder to the shaft. Glue was not sufficient so I was thinking of screwing the cylinder to the shaft. Then I found some Ikea stuff I didn’t use up to now (don’t know how it is called… Anyone?):
_ 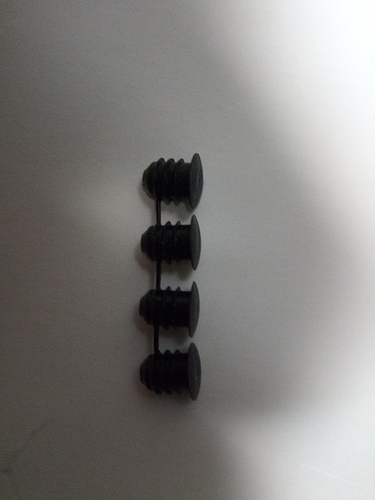 IMG_20180803_1913123120×4160 1.67 MB
_
What I’ve done exactly: once again de-assembled it completely as described above. Fitted the cylinder on the shaft and drilled a small hole. You need to do this quite low, otherwise you will drill in the brass part… You could use little screws, but I’m afraid that they will start getting out due to the vibration. If that happens, they could damage the interior. The plastic push things I found will not get out due to vibration. And if they break, the Z-axis will just pop out and no internal damage will be done.

Next part is to fit the bosch onto the temporary sled. I took of the black plastic foot and used it as template on the sled and drilled some 4M holes. Next I expanded them a bit with a 10M on the bottom side. the I picked up some M4 20mm and M4 16mm bolts. Try the 16mm and 20mm in order to fix the bosch onto the sled. Hook up the ring as described in the assembly guide and done!
I will use the same technique of using the template for the final sled.
Edit: fit the ring to the lower part of the L. If you put it too high, it will bump into the bosch. To be sure, I also sawed off the part for height adjustment (embedded in the frame). The plastic plate had to gone too. Luckily, the dust part is not giving any trouble. As general tip & trick: attach the sliders before fixing the rings. Check if you have clearance all around.
Unfortunately I’m under the impression that the weight distribution is not optimal anymore. I will evaluate on the final sled and maybe need to add some weight on the top of the sled…

Starting calibration… That reveals all the flaws in design in the previous steps. Z-axis kept popping out, sliders bumping into the chassis, clamp on the auto zero Z-axis too small… Frustrating, certainly because I had to reopen the bosch completely to fix the popping out of the z-axis. Lost a lot of time with all these small things.
In the end, I was able to calibrate, but the bottom left vertical line is not vertical at all. It is seriously curved. The other cuts are straight. I go on for now, will see if it gives trouble later on.
Then the final sled. It started quite well, but then I noticed it is not doing the depth it needed. I think there is something wrong with my CAM settings. To be continued…

So 20 days later: became a dad in the mean time and had major problems with bits. So I had to read a bit first. I’ve learned a lot! Best to use a spiral single flute (or other bit, but it should be sharp on the bottom too), run it on slow speed. So I had to get one… Not easy! At the local stores they are not in stock and when they have to order them, you pay an arm and a leg. So waiting for China which explains the 20 days.

And yes, it works! Even with the temporary sled! 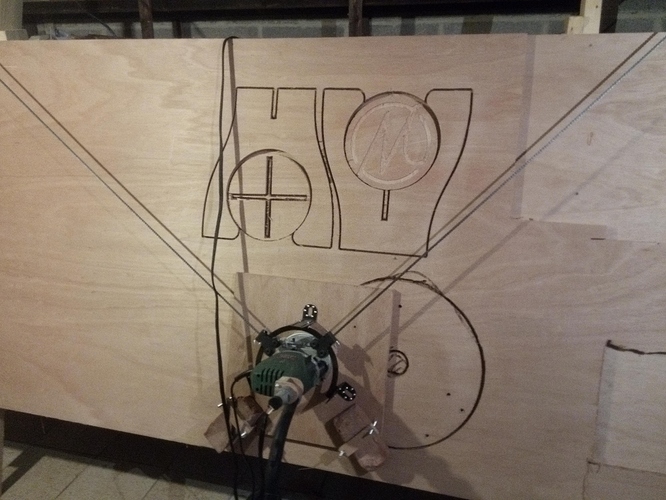 And now some practical stuff: tools I would recommend, certainly if you want to put the frame together in 4 hours:

Big thanks to the community for all the support!

Thanks for sharing your experience. I will be building my frame this weekend and also using the bosch. Will pull apart again now and secure the cylinder to shaft to save future frustration.

How have things progressed for you now?

For the moment not much… Became a dad yesterday for the third time and still waiting for the new bits it ordered.
I purchased one at the local store, but it has a flat top, which cannot dig into the wood. So it was ‘burning’ and friction than milling. Went back to the local store and three other stores, but single flute spiral bits are a rarity it seems… So ordered them on the internet (Chinese ones).

I will add this part about bits later on…