Get that Beetle running fellow Airhead!

It had a engine fuel line fire 2 years ago. I started the troubleshooting I hope to have the engine turning over again some time next month but there is a lot to replace even if i get it to start. I had just put a Zero mile rebuilt Freeway flyer transmission and front discs on it. So much to do.

I ended up bending one of my mounts when the top beam of my new frame fell as I was trying to install it (somethings really could use two people to do). So, before I order a new “compatible” one, I was wondering if anyone has looked further into producing more of these? I haven’t seen anything on it recently, so curious as to if anything is being worked on. My top beam is unistrut and it’s a pain attaching the current motor mount to the strut and am looking for a better solution.

We posted the file in the community garden. I did a production run with Dlang. I sent a set to Bar and sold one, and use one. I have had good success with mine. I don’t know if Dlang has built a Maslow yet. He had a few sets. They were pretty pricey to make and to do a quantity I was looking at over 10k. I discussed it with Dlang and we put the file in the wild so anyone could pick it up. If you have access to a break that can handle it they are fairly simple. It is highly prohibitive when doing it as R&D @ 10 units and the guy down stream is hiring a guy to do the bending.

If I were able to package my own High End Maslow - Upgraded Driver Board , plug n play out of the box, Smart power strip included - I’d have these included.

So to answer the question I’ve had zero problems with mine, they were mostly painless to install save the fact I wanted to screw from the back and built a composite beam covering access so I just had to cut 4 inches off the beam in the back side to have full access.

Thanks for the response. I ordered a pair of generic brackets (and they’ll take 3-4 weeks to make it to the US). I managed to hammer the damaged bracket back to close position and it seems to work “okay”. I’ll probably drill some hole(s) in the new brackets to facilitate it’s installation on unistrut or just mount a block of wood to the unistrut and screw the mounts into that…

why are these better than the stock Chinese ones? seems like a Unistrut nut and would fit in either design?

The stock mount has two narrow slots for attaching to the top beam. I tried using then bolts that fit through and large fender washers, but it just turned into a mess. Have any suggestions on mounting?

why did it turn into a big mess? the motor has 4 screws on the front AND on the back. if you use the back screws then there is ample room to use the two mounting slots.

The issue wasn’t clearance with the motor… I just had a big mess with these thin screws going through the mount and then the slot in the unistrut (which is slotted a different direction than the mount slots) and getting washers and nuts on the back side of the unistrut to hold it all down tightly. I tried long screws but the fender washers just barely stretched across the open ends of the “U” and started to bend. If I used larger fender washers, the nuts would pass through… and I didn’t have another set smaller washers handy to add to the larger washers… it just became a mess. I ended up cutting a piece of hardwood to slide into the unistrut channel and used wood screws to screw down the mount (through the unistrut slot). It seems solid.

Unistrut makes special spring loaded nuts that slide into their channels. two 1/4" nuts would of worked perfectly, but jammed wood is fine too.

correct they are 5.5.mm. either drill a new hole or widen out the slots with a drill bit. use a vice to hold or angle grinder would work too. or even a hand file with a bit of elbow grease

I used a drill press to accurately drill holes in the unistrut for the motors, then a tap to tap the holes. I should take a picture and upload it next time i’m near my maslow.

No, they do make the 1/4 spring loaded nuts. I’m using some on my setup right now.

How do you compensate for the direction of thrust on the nuts? The ones I have don’t slide on the bottom of the groove, they seat on the inside of the unistrut for hanging things from it. Attempting to screw a bolt from the top of the unistut into the nut in the track would cause the nut to spin freely inside the unistrut instead of clamping on the track. 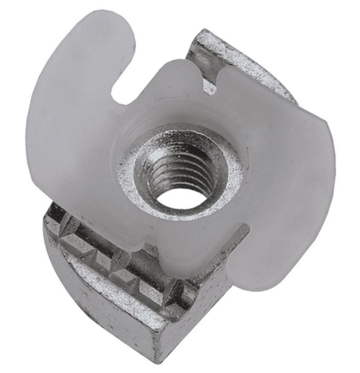 1a. if you are not using unistrut, instead of slots where the mount can slide on
the screws, it has holes, so it’s far less likely to twist (and see 2 below)

also, I mis-judged the thickness of the stock mounts, so the 1/8" steel I used
is 50% thicker than the stock ones. We’ve had a few reports of people bending
the stock ones, far less likely with these.

I made some mounts out of 1/4” x 2” angle for unistrut. It was a pain to make them but I don’t have any worries about them flexing. 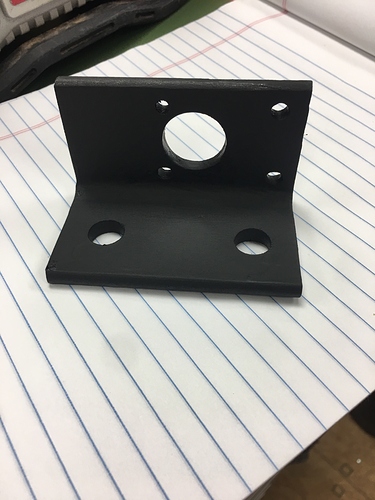 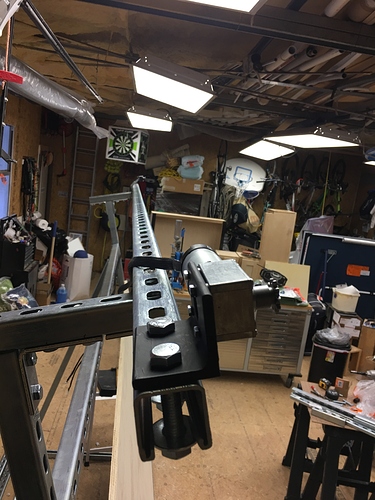 very nice. I would want to have the motor on the inside (move the holes for the
motor up to give it a bit more clearance) so that the chain has less leverage on
the motor components (less likely to break the motor)

Hi all
What are the dimensions of the motor as I can’t seem to find them (not got the kit yet).

If one is going to use steel for the cross beam why not include the motor into a box section. Either within the beam or welded to a beam?
I assume that the issue of flex is the problem. 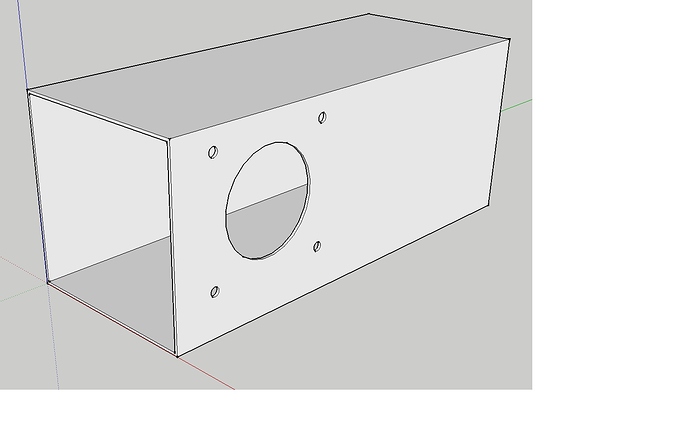