Z-adjust is sloppy, and I’m pretty sure Maslow can overdrive it

But the vibration moves it to a consistent point…
It even looks like it has the same Z screw pitch.

It looks like the lock lever is adjustable so the z-adjust could be workable. I wonder whether the lack of variable speed is a concern, though. I’ve found I need to play with the speed to get clean cuts.

The variable speed would be my only concern. You might find that you burn up bits more quickly when the spindle speed is so high. I think from a mechanical perspective it should work!

Dust collector (y/n): not included, but I’ll design one and put it on Thingiverse

When you do, could you let me know? I picked up one of those from https://www.directtoolsoutlet.com/ for $35. Seems like they have them every now and again. There is a thread about it at Deal on routers
At that price it made sense as a secondary router.

I echo the speed, Maslow travels slower, if you use any bit more that 2 flutes it can start a fire, and even at 2 you will be burning the tip.

I have that router and built it into a router table. It works great for that.

built it into a router table. It works great for that

Good to know, that’s the plan for mine

Did you DIY the router table? I am thinking of cutting a space in one of my work surfaces (re-purposed 1-1/2" thick laminate countertop) for a 3/8" acrylic router plate. I like that the router is height adjustable through the plate, and even more that the tool that comes with the Ridgid router fits the adjusting nut! Now if I can figure out the dust collection…

Speaking of, there is one available now for $32
https://www.directtoolsoutlet.com/products/power-tools/ryb-fixed-base-router-rcn-zrr163gk

Yea mine is not fancy, found an old craftsman 1 foot by 1 foot metal router table, and inserted into 3/4 plywood to have a larger table. router mounts in the metal part, and there is a small fence for doing straight cuts. Kinda handy item to clean op edges of Maslow cut projects. The adjustment on this router is identical to the Ridgid, in fact I think they maybe the “same item different wrapper” and works great for my table. I bought it to replace the Ridged when I had Z axis troubles, but the speed was too fast to cut without slowing it down.

You could probably slow it down with one of these: 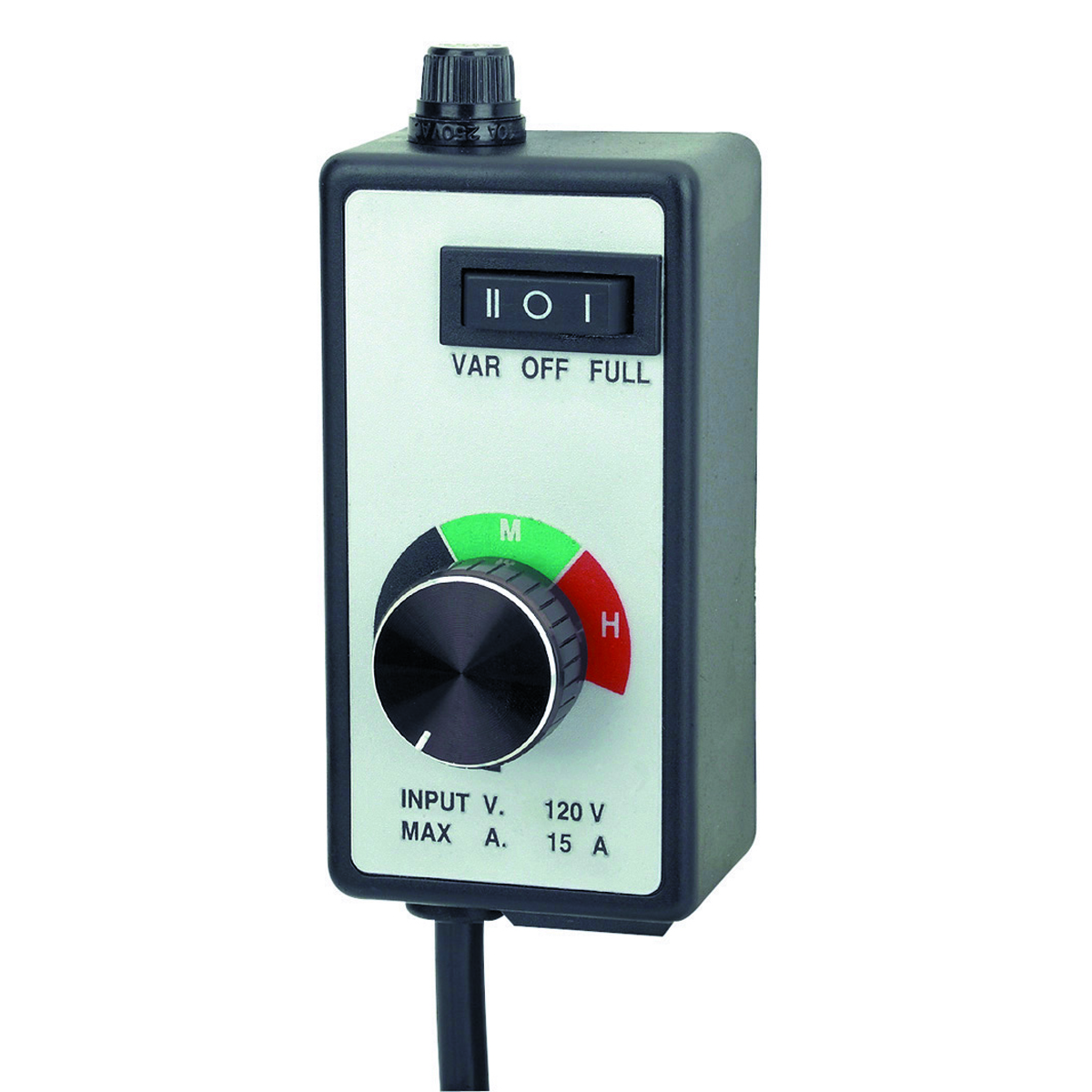 What rpm is suggested for router with 1 flute? – 2 flute?

depends on the feed rate and material. It is based upon the chip load created.
a formula for calculating feed rate:

Another link that might be helpful in understanding the relationships (though wood is not an included material)
http://www.daycounter.com/Calculators/GCode/Feed-Rate-Calculator.phtml

I am using the Ridgid R2901 router with the R2911 fixed base. I have made some measurements on the Z axis slop with a micrometer and the lead screw has approximately 2.8mm of movement when reversing the direction of the drive. I have adjusted the motor clamp so there is minimal side to side slop and I can still move the motor with out a lot of force. I have polished the surface of the motor and base with steel wool for minimal friction.

Update: I eliminated the Z axis slop with a slightly modified 3/8" flat washer . I enlarged the ID to 1/2 " to slip over the end of the lead screw. I am attaching photos showing the mod. 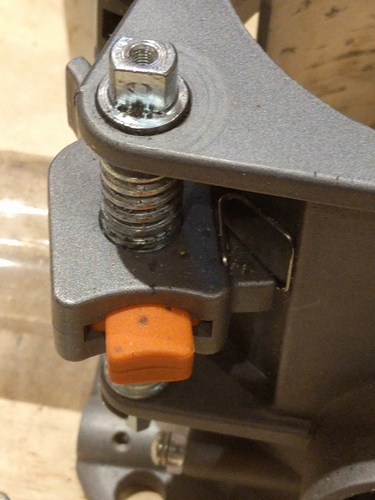 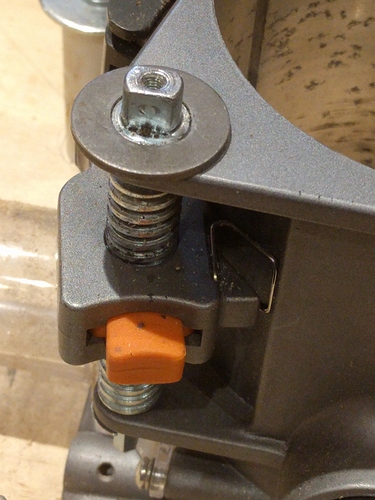 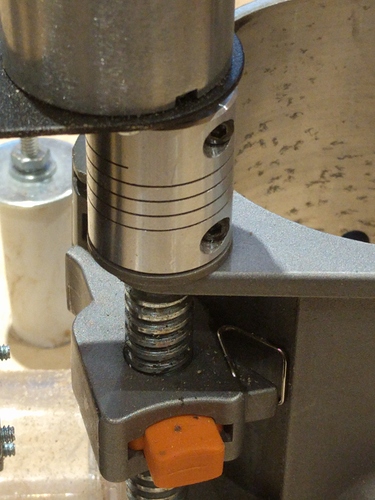 Yeah, it’s very sloppy because the “lift lever” (whatever that thing is called) isn’t really held “horizontal”… OTOH, with the vibration from the router, I’ve found it usually hits a reliable depth (then again, I’ve only used the 1/4 spiral upcut bit, so it might have a tendency to “walk out” of the cut with a roundover or ball-end bit). I got it because it was cheap, and it looked better than the Harbor Freight offerings.

Another tip - if you’re using this router, double the bricks. This is much lighter than the Ridgid, so you can see the chains vibrating during moves…