Hey Folks,
I’m continuing my quest to get z-axis working. While running some tests after fixing my last issue I noticed that the router was catching while moving up at a certain point. It would slide well with the motor for a time, then the motor would keep spinning, but the router would stop moving. Eventually the plastic thing that connects the worm screw would pop. I tried applying some graphite powder, which I think helped it slide more smoothly, but I still was having an issue in one spot.

After examining the inside of the router base, I think I’ve found my issue. There’s a bump or something inside the groove that the part of the router that sticks out rides up and down. See photo below.

Is this a deliberate part of the manufacture of the Rigid routers, or is this a manufacturing defect? 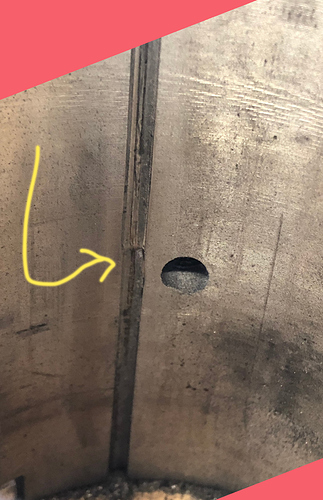 For the Rigid there are ‘enhancements in the Forum’ that make the orange part that breaks better.
C-Beams or the meticulous-z-axis or anything with a linear guides is recommended. There are routers around that have halfway reliable Z-adjustment, but for precision a different approach is recommended.

it seems to be a common manufacturing defect. cleaning it up with a small file
is a commonly reported thing.

thanks david! I’ll give that a try.

I’ve bought about 30 of these routers and some are smooth and others are rough like yours out of the box. they were never designed to be automated. best to replace the lead screw or use a cbeam dedicated z axis. many still have issues after filling down.

Yep, I worked mine over extensively and once all the manufacturing marks were out I sanded progressively up to 600 grit. I had good luck with the stock z axis but there is a certain amount of slop/variability that I could not get out of it. Ultimately I moved to the Meticulous Z axis.

I have only applied the blaster graphite lube once and that was 18+ months ago. Just FYI. It is also critical to clean up the casting on the router body with sandpaper, I went to 600 grit on mine, and cleaned tp the channel the alignment pin rides in. I have applied lube since then, but only to the lead screw on the Z axis. I use spray lithium lube on that.