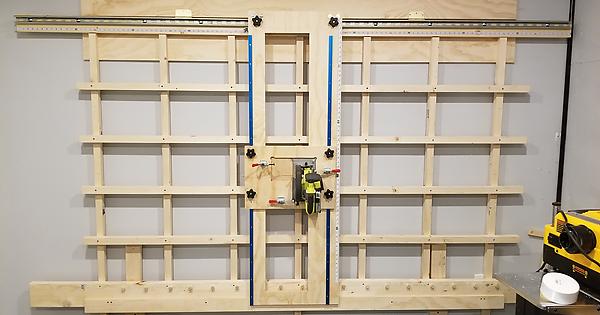 Out of curiosity, what aspect would you be automating? Seems like panel saws are pretty straightforward to operate, and I would think the steps involved in doing CAM for an automated process would take longer than just swiping the saw across as needed.

Just in the sense that you can load a cut list and have the saw set your dimensions for you. The only manual work would be loading/unloading sheets at that point.

If you work in a cabinet shop, this becomes pretty valuable.

I have really wanted to incorporate a panel saw on the maslow frame. I bought the plans for the ShopNotes #88 that this is loosely based on, however, I think I might like the top roller mechanism on this one a bit better. It seems easier as long as you can get the 3D printed parts right.

I’m going to go with a track saw and track and use the Maslow frame as a working surface. Cost may actually be similar or less compared to making something like this.

Link for Canada. US is similar or less $

I’ve been holding off on getting a track saw because they’re so expensive. I saw Harbor Freight has one now… I’m sure it’s junk but for the 1 or 2 times a year that I would actually use it, I think I’ll roll the dice.

Amazon sells a saw called "shop fox’ that many people buy and modify to get them very close in cutting quality to a (whatever that la dee da brand is) track saw.

It’s also very easy to make a sawboard guide, but you still get tear-out. Also, the plunge action of a track saw is part of what makes them so good at what they do.

I’m leaning towards Makita because in Canada it’s the best value if you want variable speed and a soft start on a saw. It’s cheaper than the Triton once you add the track and clamps.

I’ve been thinking that the right thing to do is to have something that hooks over the top beam, but the fact that the chains will be meeting there is going to make that a bit more painful (unless you go with an extra-wide top beam so that you get a foot or two in the middle to work with)

It might be a little easier (or more difficult?) than hooking it over the top beam. The top beam is offset forward of the work surface, so any hooking over might have to be over another beam (complexity) or maybe just the sheet of material being cut (pretty easy).

Maybe one of the spacers for the beam (if using spacers) could be a second rail for a track saw. Or maybe something could be attached to the beam-to-frame braces (if using those instead of spacers) for panel saw use.

That does look interesting. I may get one for my cordless circular saw. It’s the “wrong hand” and this would keep me from inventing more curse words.

I have the Grizzly Industrial track saw. I got what I paid for. It works decently well, but not perfect and it isn’t the easiest thing to use. We have the fancy brand here at the office and it is much more pleasurable to use, but I am not sure I would pay 5x to own one myself. (Although I suspect I would pay 5x to build my own panel saw version)

My complaints with the cheaper ones are that they lack some of the little things that make a track saw easy to use such as quick and powerful clamps on the the track, smooth solid track that doesn’t bow, and other little bits.

The biggest issue is that it has slop in many dimensions. Not huge, but you can’t count on the cut being vertically square, also the saw seems to wander closer and farther from the track ever so slightly.

In the end I just use it to rough cut things into manageable sizes to cut on my table saw.

The biggest issue is that it has slop in many dimensions. Not huge, but you can’t count on the cut being vertically square, also the saw seems to wander closer and farther from the track ever so slightly.

Well that’s exactly the opposite of what a track saw should be!

I’m surprised by that… the track itself looks very similar to the Makita. I’ve used that one and it was rock solid.

I realize this is necroposting but we’ve been working hard at expanding the swamprat’s playground, er, northern mooseshop and find ourselves with a healthy stack of plywood that needs to turn into cabinets. A star of a reasonably priced tracksaw would be a big help, anyone found anything interesting lately? Yes I know it’s ironic to want a tracksaw to resurrect my Maslow (btw @MetalMaslow, any updates?).

I was looking at the MLCS saw but can’t find any reviews. My circular saw is a left bladed Milwaukee plug-in, many track systems seem to not accept it’s differences from the currently popular right spinner.

Sent you an email. We got a used milwaukee tracking saw for about $270. It cuts nice and slightly better than our cheap ebay one. if you just use it occassinally the grizzly, Worx, Wix, Shopfox, whatever name, saws that are all the same (except color and branding) work fine.

Thanks! It’s just for occasional use, although my future predicting crystal ball has a short circuit somewhere and has been about as accurate as the weather forecast lately. I have reservations about being able to break down a dozen sheets of 3/4 on the table saw by myself these days