First I want to say massive thanks to everybody who has been develloping the machine and the software. Thank you, Thank you!
After some initial problems I got my Maslow running pretty well, so it was time to put to the test if the machine is capable of cutting acurately. Also I was learning Fusion 360 (after having used Inventor for a few years), and needed some exercise.
When I saw some really cool youtube video’ s of Matthias Wandels Pantorouter, my project was born.
The Pantorouter is a router on a pantograph arm capable of making both mortisses and tenons the analogue way, using a patern twice the size of the actual mortis or tenon. A musthave for everybody that is into traditional woodworking.
It has a lot of moving parts: the four piece pantograph arm stands on a sled that provides for the plunging of the router, the sled is moved for and aft by two levers, on the sled there’s a height-adjustable bridge for the interchangeable patern. And there is a tilting table to clamp the workpiece onto.
My pantorouter is made out of 4mm and 12mm baltic birch ply, and some pieces of 40mm ply I had left over from an other project. My design consists of boxes with sides that interlock with each other, so the machine will be stiff, dimensions will be true and the holes for the axis’ will align.

The Maslow cuts turned out to be pretty acurate, I think the only problem appears when the sled cants a bit when the material it slides over is not flat enough.
The Pantorouter works great, and is very acurate too.

Best regards from the Netherlands,

What a beautiful build!!

I’m such a big fan of his, it’s so cool to see someone using Maslow to make something inspired by one of his projects.

My design consists of boxes with sides that interlock with each other, so the machine will be stiff, dimensions will be true and the holes for the axis’ will align.

It looks wonderful! How is the router held in place?

Have you tried cutting a template for the pantarouter on Maslow?

Thanks! And thank you for all your work on the Maslow, I think it’s .a really cool machine.

The template you can see in the photo’s was cut on the maslow, including the tapered outer edge. With a straight bit in 18 passes to create the chamfer.

This is a really cool build but Mathias would not be pleased that you used a CNC machine to build it. Eh, he’s currently too tied up completing his army of homemade bandsaws to notice anyway

I really like the boxbeam design. I think this is actually an improvement on his design. Using the baltic birch makes it more dimensionally stable.

He liked it, fortunately, cause I,m a fan too

I was joking a little because a couple of years he did a video where he compared cutting parts out with a cnc versus by hand. He did a later video where he had parts laser cut at a makerspace. He didnt seem all that impressed by either experience. Which i found unfortunate because i dont think he gave either test a fair chance. He’s a fan of using patterns and cutting from templates. Which is fine and ive made a lot of stuff that way. Still, I wish he gave CNC more of a chance, especially a Maslow. They are tools, just like a bandsaw or a drill press. I would love to see what he could do with a Maslow as far as improvements go.

All this being said, your pantarouter is beautiful and would love to see a video of it in operation

Well he’s so good with a bandsaw! If I could bandsaw like Mathias maybe I wouldn’t use CNC either

Thanks for your praise! I come from a strictly analogue woodworking background too, and love all these new posibilities with CNC. It is very time consuming though, the designing, so I do understand when people say they work faster than CNC, for one-offs.

And here I have a link to a video of actually making a mortisse and tenon joint. 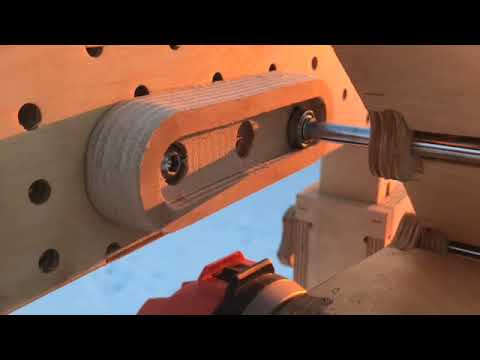 … says the guy who came up with Maslow. You’re no slouch yourself Bar.

Thanks for sharing the video. You nested the parts for the cut nearly perfectly.

Am I understanding this correctly that it’s the same template for both the mortise and tenon, just using the inside and then the outside of the template? That’s brilliant!

Well that’s Matthias I think. And even better: the outside of the template has a 6 degree slope, so by adjusting the position of the bearing higher or lower on that slope, you can finetune the thickness of the tenon