Anyone else finding that the very shallow indent on the router body allows the z axis quick release to pop out of the router body when the z axis is moved? There is barely anything there for that piece that pops into the hole to grab on to.

@eppic I believe we’re not the first - does yours look anything like this?

Admittedly, mine came factory pre-dented but it became worse over time.
In case the edges on yours look fine, you might want to have a look at the spring that is pushing the quick release against the router body. There is a picture & part numer on the forums here somewhere, maybe I can find it…

Mine is brand new, but it doesn’t look like that. The notch in the router body actually has slightly beveled edges making it easier for the knob to pop out… I removed the bungy, and really loosened up the clamp but it has to be really sloppy before it works on my router. Definite priority to make the upgraded z-axis for sure. I’ll take a pic when I have a sec, but mine looks like it’s made totally differently than that.

I also continue to have issues with the Z axis on my Ridgid router.

The reason we have so many problems is that we are trying to use the router “Z” lift feature in a way it was not designed to be used. No matter what you do to try to modify the existing design, it will never remain stable/ridgid (no pun intended) over time. There is too much slop in how the base is made and connected to the router that any band-aid fix that is implemented will in time fail. If it is not one thing it will be another.

I think that it goes without saying that we want our systems to be stable and provide consistent service. The best way I see for this is to make a different “Z” lifting system, as are currently in development by a few members on the forum.

This is a very well known issue. I’m on my phone or I’d try to assist with the various topics already started here about how to try and deal with this issue. A number of different fixes of various complexity and cost are available.

I took the approach that friction is the enemy, here is what I did maybe it will be of value to others. I sanded the router base and used dry graphite lube in addition to the bushing and washer fix.

I spray Slide-All, a dry lubricant that I happened to have handy, on the router body, housing, and gear before use. Just cut a 3 hour V-carve sign that turned out just perfectly. My previous v-carve test without the slide-all resulted in z-axis error that accumulated over time. BTW the scorch works v-carve program is pretty amazing! F-engrave

Dang, thanks for the tip on F-engrave I’m going to investigate that further.

Thanks for the tips. I’m going to use some dry silicon lube for now, but I really think the answer for any kind of longevity is a new z-axis. I think my first project for the Maslow is the meticulously Maynard z-axis. I had ordered the parts before I even got to built the maslow as I see that as a definite long term issue.

I found that the biggest issue is when raising the z axis. The direction of the thread makes the catch for the spindle rotate away a bit and let’s the router slip. I added a bunch to that part and so far it works. 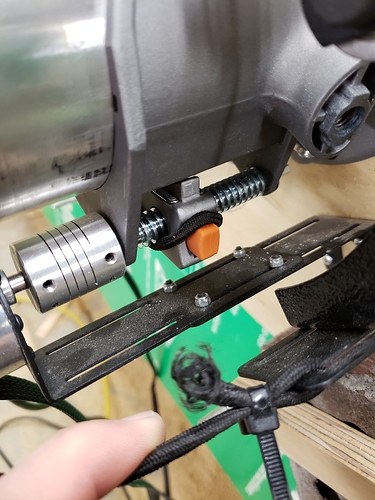 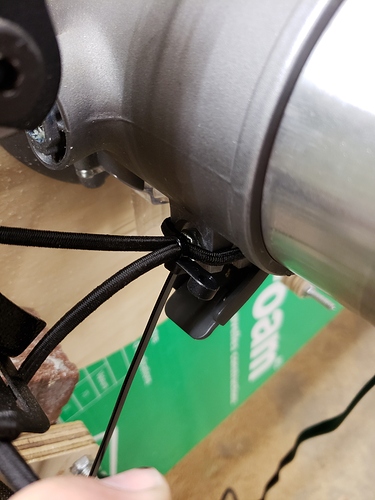 Hi everyone, I’m new to the forum and new to the Maslow CNC. Just finished setting it up last weekend. I’m running the latest version of Ground Control and bought the suggested Ridgid router. I have the router buckle bolt on snug but not too tight, to keep it in place but also allow movement. Everything is set up, the router is responding well to all commands and I’m ready to cut my final sled. I used the provided code for cutting the final sled, without any changes and ran the program. It did really well up until it cut the inner circle (after all the drill holes). Once it finished that cut and moved to the next location on the board the z-axis became mis-calibrated and the program showed it lifting to a safety height of .5in, however, the bit itself was still in the negative position (in the plywood) and ended up cutting a big gash on it until I stopped it. I believe that somehow the actually router based was unable to move despite the z-axis motor operating correctly. The z-axis is responding well, I can move it up and down so I’m assuming its not a programming/ software issue. I can reset the router height to zero and do it again but there are two problems:

Once it finished that cut and moved to the next location on the board the z-axis became mis-calibrated and the program showed it lifting to a safety height of .5in, however, the bit itself was still in the negative position (in the plywood) and ended up cutting a big gash on it until I stopped it.

It’s possible that the router z-axis arm slipped out of the notch in the router (this has been known to happen) so the arm kept moving up, but the router stayed put. If the z-axis motor was turning, but the router wasn’t moving, this is highly likely to be what happened.

Great, thank you so much for the help! I’ll check to see if that was the issue, will keep you posted.

Turns out you were right @madgrizzle, the notch did slip out of the router.
I’ve made some adjustments to my router as referenced (@dustcloud @geeklimit) in several of the maslow forums including:

I think I’m ready to try it out again, but can anyone be specific about the tightness of the bolt on the router base collar. Its been mentioned that you want it tight but not too tight, but I think that’s been causing me some problems. If its too tight the router wont plunge, but if its too loose it will slip. Any help is appreciated!