So I have the recommended Rigid router but have never used routers before so I’m having problems getting my build up and running. I’m on the calibrate z axis part however when I install my bit adaptor/bit it seems to be extremely low (like beyond just being a fully extended z axis) it pushes the sled up about 1 1/2 inches to 2 inches. First I want to make sure I have the bit/adaptor inserted correctly and then I want to find out what I’m doing wrong. When I raise the z axis it makes noise and spins but doesnt seem to be doing anything to the actual bit height.

I put in the adaptor like this where the skinny side goes through the top or outward facing piece of the nut and then slide in the bit to about a 1/4 inch from the cutting piece. The adaptor goes all the way down till the collet stops it at the lip. 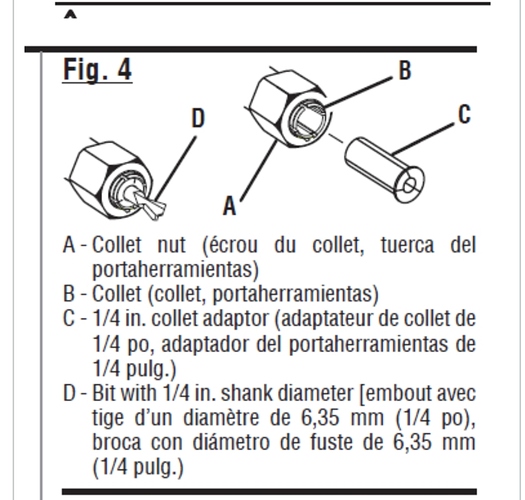 We are all learning on some level with this and we are all beginners somewhere. I’m not new to routers, but I’m new to this control scheme and what matters to get a good quality cut.

This is how I did it. I have a ryobi router, which is the plastic version of the rigid with no speed control. The Z screw is very similar though. To start with you want the router z axis nut to be up and away from the base of the sled as far as possible. I have this nifty yellow button that disengages the z axis drive screw from the router hold and lets me slide the router without turning the z axis. Based on this googled image I found (likely from this forum somewhere - thanks to the op) your button should be orange (I circled it in blue) to slide the router up and down within the clamp sleeve or just the clamp. Make sure the adjustment nut on the clamp is loose enough to let it move, but not loose enough to let it wobble when the clamp is tight. Also a bungee is put across the top of the router to hold down any play in the z mechanism. 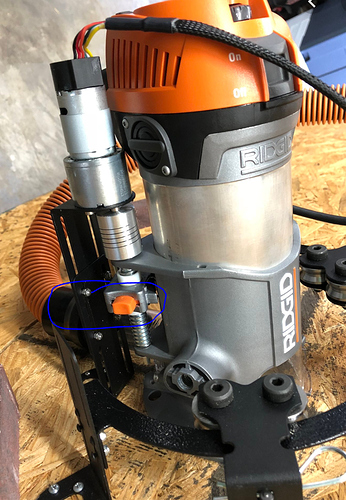 image999×1442 543 KB
When I change bits, I remove the bungee, push the button and slide the router holder all the way up and then I can get a wrench in to loosen the collet. Once I get the desired bit in and tight, I press the button and lower the router down until the top of the it hits the work piece, then reengage the z axis screw by letting go of the button and reattaching the bungee. This distance will vary depending on which bit is mounted. From there I use the control software to move the z axis up or down tiny amounts until the bit doesn’t scratch the surface when I slide the sled up by lifting it, then I press the zero Z axis button and it sets that position as z axis zero and all cut depths will be relative to that.

If you bit is down too far, then you may need to verify the collet is in all the way, the bit is in far enough to hold tightly, but out far enough to cut your work piece.

I hope that is helpful.

I did press the orange button mentioned to remove the router from its base. Does that mean that the router doesnt need to be pushed all the way down? I thought the function of that button was to keep it held in the base. Theres a clamp on the other side of the router that doesnt hold the router in if it’s not all the way down. 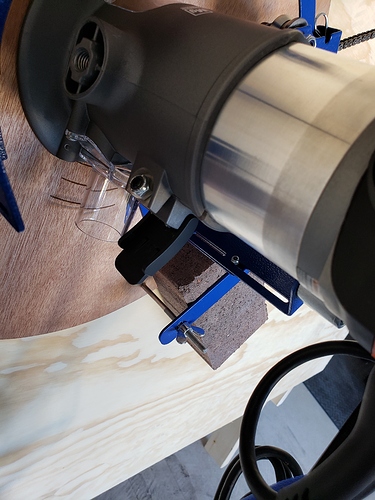 That was it! It was fully extended lol. Thank you very much! 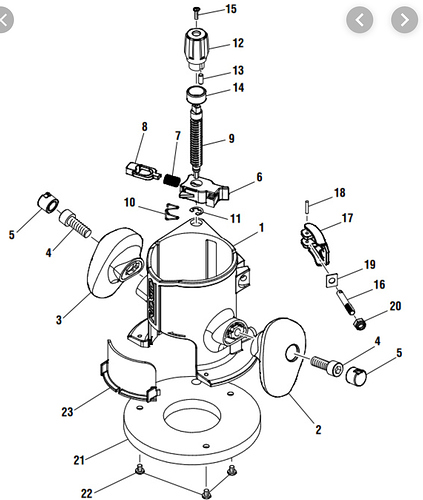 image1133×1337 178 KB
the router needs to go in all the way to its holding bracket, not all the way to the bottom. The square end of #6 in the assembly drawing above has a square part that locks into the router when it is slid into position. The button (#8) in the drawing above allows #6 to slide up and down the screw without turning the screw. Sliding the #6 up and down should move the router bit up and down. In normal router use, you would slide the router in, engage #6, adjust your height with the #14 twist and then lock it in place with #17 clamp. The only difference with normal use and maslow use is that #17’s holding nut #4 is loose enough to allow the #6 to move with the z axis motor that attaches to the lead screw #9. I wonder if #6 isn’t notching in correctly.

EDIT: Looks like you got it while I was numbering… Great Job! Good luck!

I’ll mention on the topic of installing router bits. If the bit doesn’t show a little bit of the shank (the part that doesn’t have any grooves in it), it is in too far. Installing the bit so that the collet is in contact with the cutting edge can damage your bit.