Introducing myself: I’ve been a drawing robot enthusiast since early 2012 or so. My first drawing robot was based on Sandy Noble’s Polargraph - which uses a system of pulleys similar to the MaslowCNC to move the pen. I discovered the MaslowCNC just before Maker Faire 2017 and have been lurking/following since.

My own drawing robot used a single connection point (thing #65823 on Thingiverse), with the pen held at constant fixed point just below the connection point. It allowed me to have the precision of the pen/triangle being at the same point, without the added complexity of having them actually be at the same point, and without the distortion or additional math caused by having separated attachment points.

After watching the latest MaslowCNC video update and reading the sled modification ring post by @bar, I thought that what I had learned from building my drawing robot might be of use. I had written a blog post describing this better:

In discussing Sandy Noble’s Polargraph pen holder I mentioned how his design is optimized so that the point where the two cords meet is always the same as where the pen tip meets the paper. (…

The only downside to this method of pen holder is that I had to run my robot slightly slower than Sandy’s - since the offset pen center could sometimes swing back and forth with quick movements. However, I suspect this would not be a problem for the MaslowCNC.

I hadn’t seen this idea floated here and wanted to offer it up in case it was helpful.

P.S. I had wanted to add additional info, but am barred from putting in more than two links since I’m a new user! Haha

If I am understanding your proposal, you are saying to bring the chains together
at one point above the bit.

This has been proposed many times, but with the heavy sled, we expect that this
would cause the sled to swing side to side. We already have this problem a bit
in the lower corners where one of the chains is at it’s minimum tension.

If proposed many times, I apologize.

I did find with my drawing robot that having a single attachment point above the pen did lead to additional swinging. I was able to mitigate this by running my robot slower while increasing and balancing the weight a little.

In our case, we have both the problem of it swinging, but also of it dragging
and not starting to move fast enough (there is a lot of static friction in these
machines.

the only dumb suggestion is the one not talked about, it’s a long thread (and it
follows many other threads on the old forum), so it’s easy to have missed that
this was already suggested

the only dumb suggestion is the one not talked about, it’s a long thread (and it
follows many other threads on the old forum), so it’s easy to have missed that
this was already suggested

Second this… toss those ideas out. If nobody did, we’d not get ahead nearly as well

I was thinking about something similar. Trying to make it more rigid without adding any additional motorised axis.
What I was wondering was if you coul have rails with runners on the top and bottom of the machine running the length. Connect the top and the bottom of the router holder with a chord through the runners and round the back of the machine to make a loop tensioned by a bungy or similar. These keep the router in the same vertical orientation.
If you were to do that then, in theory, you could also connect both chains to the top connection to give a more precise position.

please make a sketch to show us what you are talking about, I’m not sure I’m
visualizing things correctly.

I don’t think the runners would have to be very expensive or complex to make as they’re always going to be in compression only. I would expect to be able to use delrin/aluminium style runners that you can get for sliding wardrobe doors with some V bearings for the cable. 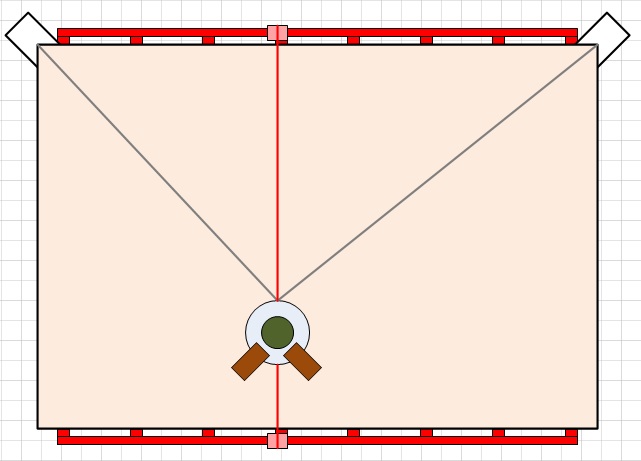 without the runners being motorized, they will lag behind and the forces on the
two parts of the red cable will not be even (except in the middle where they are
the same length) and so they will actually force the sled to rotate.