When I try to view the model it just has the rails. I can’t find the actual object. Would you mind sending the file to me directly?

Here’s what I was looking for: Looking for bit swapping tips has the pin out photos.
Thank you!

I’ve opened a PR in the Firmware repository that will make setting the Advanced setting “Max touch Z-axis plunge” negative unnecessary when “Z-Axis Pitch” is negative. Keep an eye open on the next version of Firmware - if that PR should get merged, then you’ll want to undo that change (set “Max touch Z-axis plunge” positive) to have the correct “Touch Zero” operation. 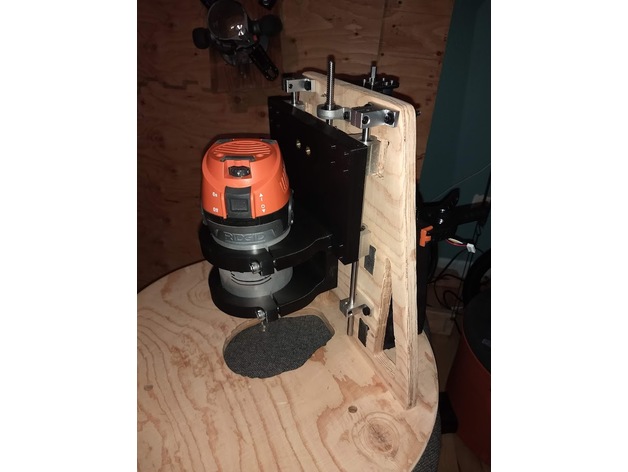 Just trying to make these available for everyone until I get a chance to clean up the Fusion360 file. I managed to find all the STLs that I used for my sled, though. I included the spine, spine cut section, and gussets so they can be used to...

Here are the files I printed. If I can’t find my spindle clamps in F360 somewhere one of us will just have to update them again “for the record.” Apologize for that. I do a lot of things in the middle of the night (like right now) half asleep.

@MeticulousMaynard, at a glance I couldn’t see what licence you may have released this project under, I thought I would ask since I have been posting stuff on thingiverse out of convenience. It is set to the default (CC Attribution) right now but I think we should go with public domain dedication. Your call, obviously. Thanks, and let me know,

It doesn’t matter terribly to me. I never changed it from the default. I designed the new sled for the community, so giving it public domain dedication is fine for me. I’d rather not have someone else making money off of my idea, though. I don’t know too much about the legal aspects of each of the different dedications.

We should probably add your stl files to the community garden page, though, so people can also get them there.

What an awesome design! In the 3d model the ring is mounted at the maximum extent of the L brackets. The standard z axis L brackets were not designed for lateral forces and look somewhat flimsy. From an accuracy point of view, minimizing flex and maximizing rigidity should be the goal. Using beefier L brackets, and/or mounting the ring closer to the sled would achieve the goal. Hence the question about minimum ring to sled stand off distance and opinion about L bracket rigidity.

I recently bit the bullet and ordered parts to create my version of the meticulous z axis. I wanted to be able to order all my parts from Amazon so I made some modifications to the list. I ordered a 10mm wide belt and 16T pulleys to match. Here are the links FYI.

I have recently completed the upgrade of my Z axis using mostly the @MeticulousMaynard design. I still need to find the right weights and set balance correctly, but it moves wonderfully.

The open viewport is fantastic and tool bit changes are so much easier. I had problems with the wood clamps so I added hose clamps to the outer rim and this solved the problem. 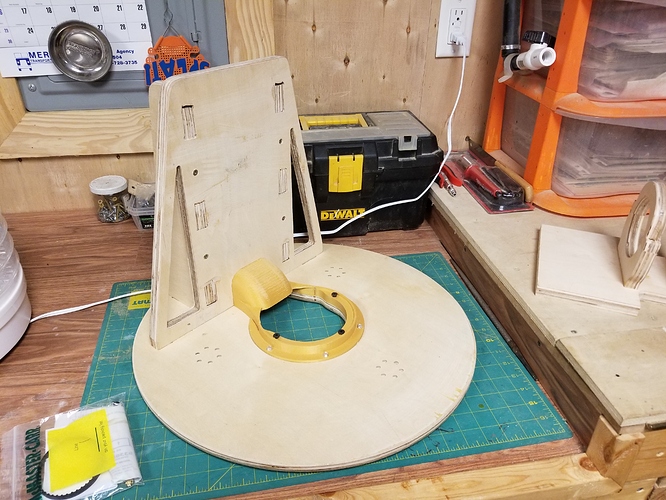 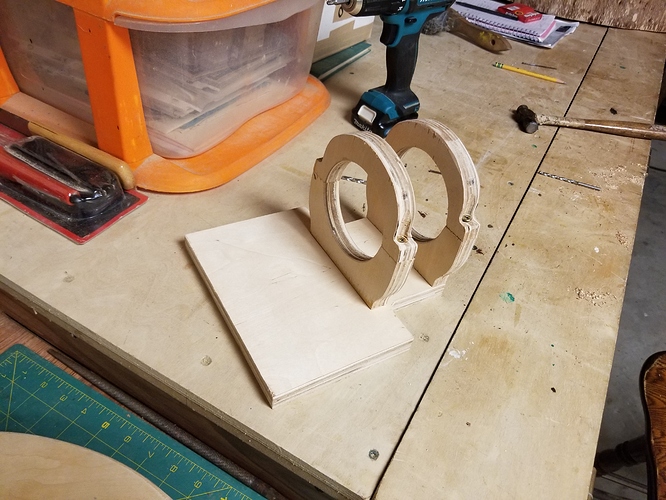 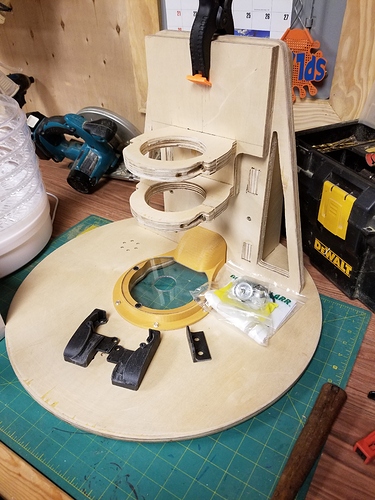 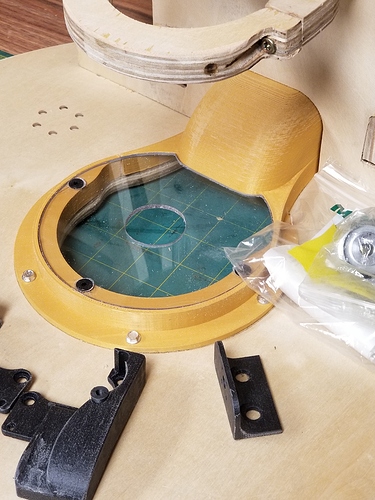 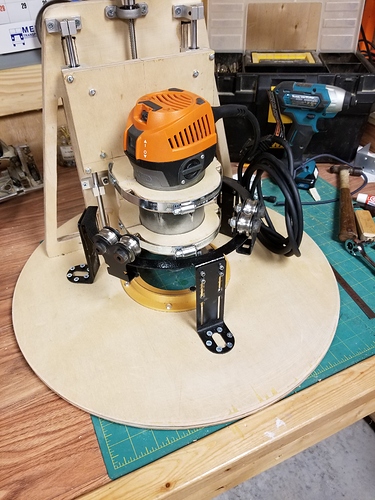 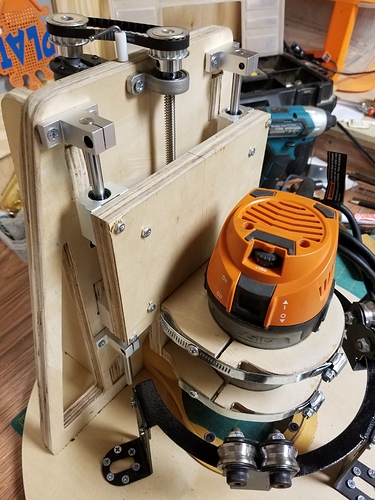 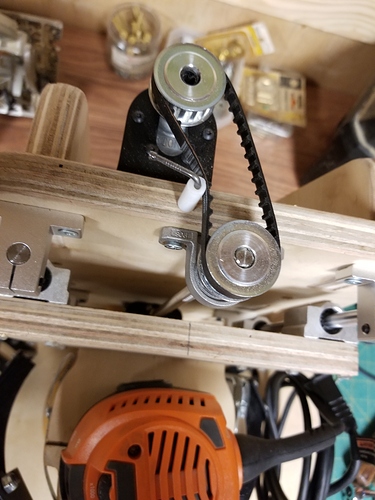 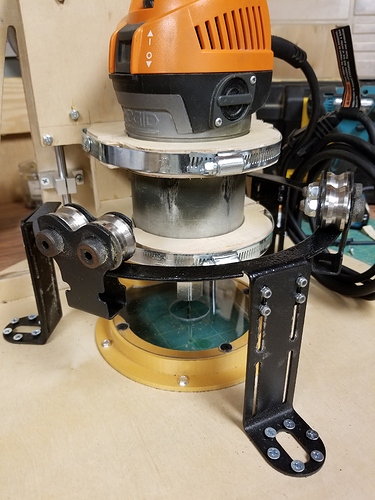 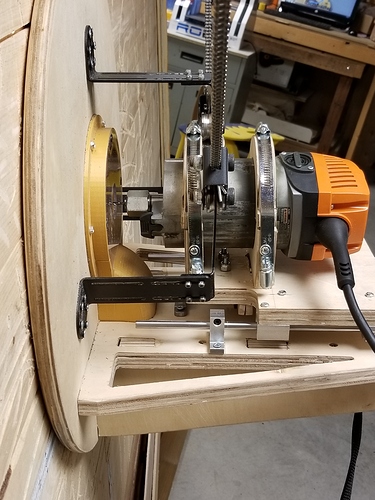 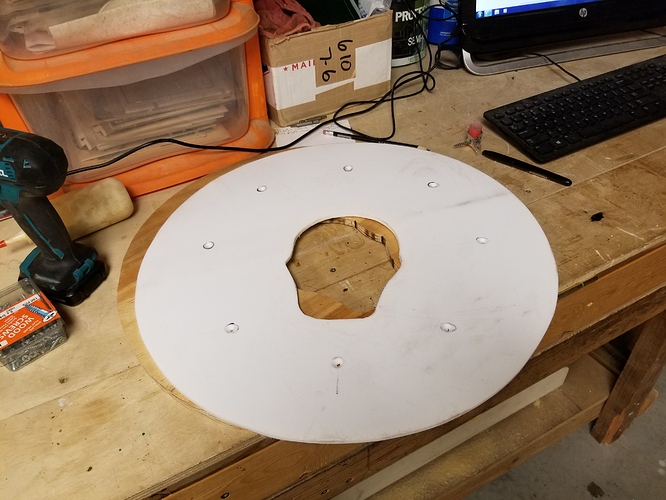 Just wanted to thank this group for all the work. I was able to build one almost exactly per the plans at the time I started. I did run into the problem mentioned earlier of the wooden clamps interfering with the ring system. My solution is similar to one given, although I put 2 5" 5/16" inch bolts through both clamps. I felt this would be more stable 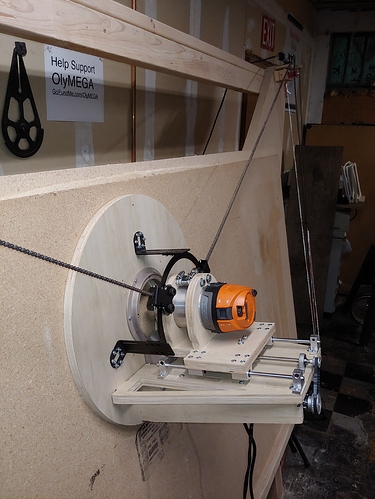 Here is a closeup of the clamp solution. 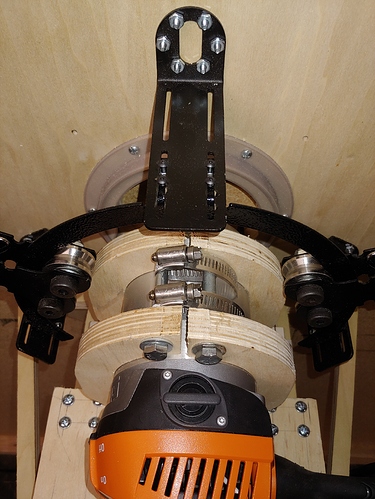 Looking good! I always like seeing the solution that people come up with for the issues they run into.

Not sure you’re going to want to make new clamps, but I had modified the spindle clamp design to make it work better with the ring system. They’re the ones circled in green below:

It looks like you’re using high-quality plywood, but it still may also be wise to machine the new ones from solid wood rather than plywood. There’s been some discussion in this thread about the voids in plywood reducing the strength of the clamps, which could result in them failing. This would be even more an issue with the new design, which is thinner than the old one.

Thanks for the input. I was going to go with the new clamp design, but saw someone else had some trouble with that as well. Probably from using cheaper plywood. As you noted, we are using very high grade plywood, and there are no voids in it. I considered 3-D printing the new design, but my printer wasn’t big enough. We just got a new printer, so I will go that route if this fails. For now it feels very secure.

I think I already know the answer but would appreciate outside input. Is it required to install the dust chute prior to assembley of the wood parts?

Is it required to install the dust chute prior to assembley of the wood parts?

Yes, with the design of the dust chute, it is required to install that to the base before attaching the spine for the Z-axis.

I was just looking through my instructions in the Community Garden for assembly and realized they’re terribly out of date. I will need to fix that, hopefully sooner rather than later. I’ve never expressed the order of operations here, so I can see where it would be confusing.

I’m sorry, my post was not meant as a complaint. Just prioritizing, I will need to set my new 3D printer up before I finish the Meticulous Z axis is all. Personally I am grateful for the work you have put in and shared!

I didn’t see it as complaining at all. I was thinking as I was writing my reply that I had made note of the order of operations when I wrote up the instructions. So when I went to look at it I realized that they were written for the old configuration and had no mention of the order. Not too much has changed in the assembly process, but it still needs to be revised.

I wonder if this would fit within the ring and be able to sync up with Ground Control.
https://www.mlcswoodworking.com/shopsite_sc/store/html/smarthtml/pages/powerlift_pro.html
???

I have seen 8mm rods deflect pretty easily. With the weight and torque of the router, is anyone seeing that with this z axis?

I’ve had it with z-axis troubles. 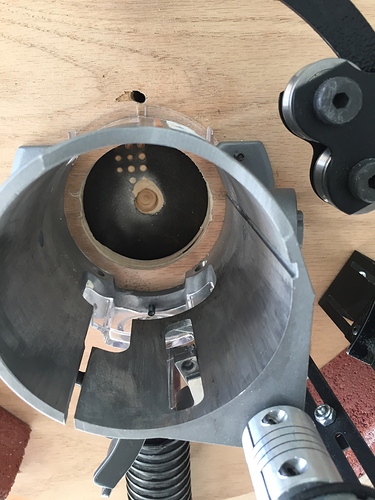 I’m hoping that a meticulous z-axis setup will improve reliability. A while ago I bought this beast on e-bay: 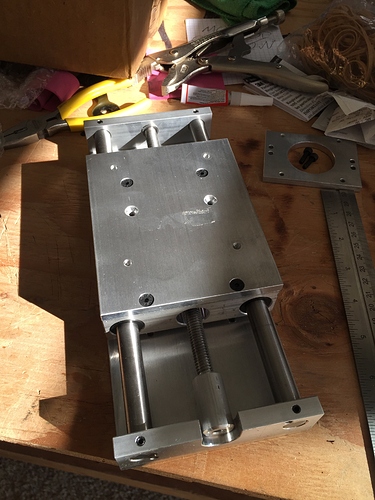 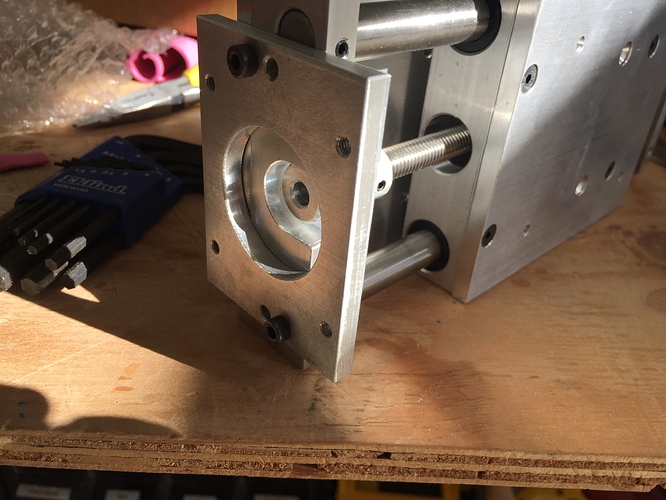 I’m sure I’ll be back in this thread with a lot of questions. Wish me luck!