I’ve got the Ridgid router and I usually do a decent amount of switching between a few bits and I’ve come to dread it.

Trying to navigate my arms and wrench around the sled (with Logan’s linkage system) and z-axis mount AND figure out some way to push the locking button through the dust outlet pipe is a big pain.

So, does anyone have any good tips or tricks for changing out router bits?

I pull the motor out of the base to change bits. A bit of wrestling on the bench to get the collet loose, but way easier than on the sled!

. Never had a problem with losing my location, as I separate different tools into separate files.

Also, put collars on teh bits so they always go into the router the same amount.
If you are really good you make multiple bits the same length. (long term,
maslow needs a tool table to havbe different lengths for different tools)

Definitely what @blurfl wrote!!! I had to learn the hard way too

The z-axis zero (G38.2) operates independently. If you move the bit to z=0 before removing the router, you can do an auto-z-zero with the new bit and be ready to go.

YES! That’s better than I could have even hoped for. I didn’t realize the motor came out so easily.

Auto-z-zero is intriguing. How does that work?

you connect the GPIO to the bit, connect ground to a flat plate that you slide
under the sled. The system then rund the Z axis down until they make contact.

I’d definitely like to see this in action, it’s also worthy of a wiki page…

G38.2 zero z axis
The G38.2 gcode moves the bit until a touch-point is reached. grbl implements G38.2 for three axes; this only implements the z axis.
This implementation is slightly irregular, as G38.2 is supposed to finish at the touch point without altering the home position, in grbl the user would use G92 for that. We don’t have G92 (beyond the scope of this

) so this zeroes the z axis at the touch point. If the touch point is not reached, the ‘STOP’ command is issued to halt further execution without altering the zero. An example of operation in inches mode would be to execute this command file:

The probe is assumed to be connected to AUX4, which is set at the top of CNC_Functions.h . Ground is attached to the router (bit) and AUX4 to the touch plate. AUX4 is configured as INPUT_PULLUP and is pulled LOW when the probe touches the plate.
I use a piece of aluminum sheet for a ground touch plate 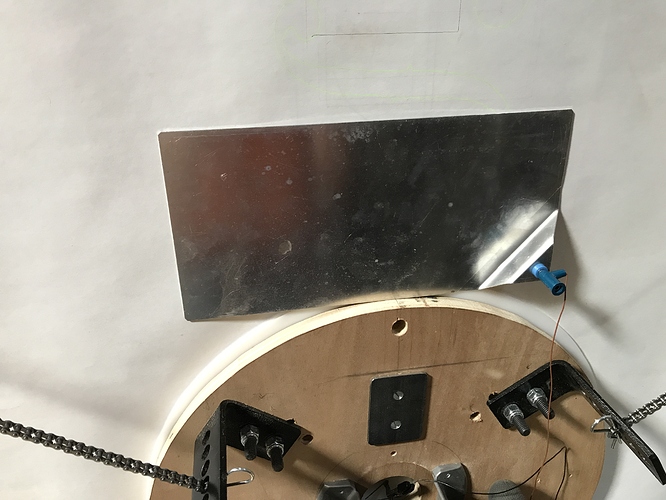 and an alligator clip to attach to the bit to AUX4 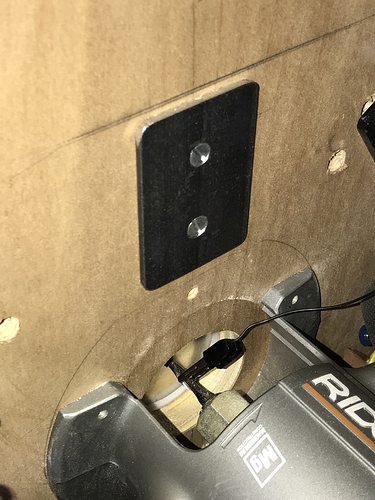 The parameters for G38.2 are the axis (Z in this instance, X and Y are currently ignored…) and the distance to travel before cancelling in case of a failure to touch down ( -.15 units in the above example) and the speed to travel (I like a slow speed). If you like millimeters, change the G20 to G21 and use a suitable value for Z.

To zero Z, I unplug the router

, slide the plate under the sled, hook up the cable to AUX4 and the plate and clip onto the bit. Then I use the Z-axis panel to drive the z-axis to a bit above the plate, less than .15 inches in the above example, and execute the above gcode sequence. I’ve got it pasted into one of my macros, but it works if you run it as a cut file instead. The z-motor moves until the bit just barely touches down and Z gets set to zero at that moment. If the bit fails to touch down, you get an error message that the “probe did not connect” and the z axis value stays unchanged.

Fantastic Work guys! I love this.

Your using Gnd & Signal on Aux 4? Can you show a simple diagram? 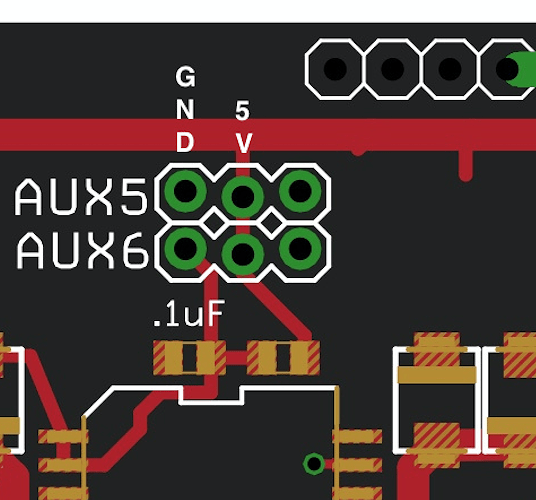 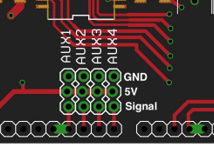 This thread is about turning on and off the router from Aux 5 but the information is the same on connecting pins to the board.

This is a way cool feature! I am pretty sure that I can stare at the above for a fair amount of time and still not be able to figure out how I could make it happen. Can this feature be added to the firmware, with some kind of kit or “step by step” to make it more easily accessible.

I would’ve loved it if the aux pins had connectors already soldered on the board. After my “incident” with the soldering iron, Ms. O’Leary wouldn’t let me near the iron in her barn again.

I have not done this yet, but as i understand it, for the hardware side it’s not really that hard.

From that point on i’m not much help, my maslow should be arriving tomorrow, so i haven’t gotten much experience yet

And with a totally awsome schematic 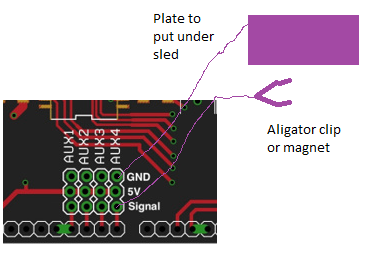 you could also solder pins in place and use connectors, but this is the minimum required i believe.

connect the other wire to an aligator clip

Anyway, I would hope that all the Ridgid routers are set up this way and it’s not the case that mine is just dangerous

Z gets set to zero at that moment

Do you include a Z retract in your macro? Or just deal that manually? I haven’t gotten around to looking into implementing macros. I will have to do that soon.

The macro leaves the bit at the zero point. I use it just before starting a cut.