First of, congratulations for getting through this thread. Any of the development threads in this forum have a tendency to get pretty long

We’re currently in a transition phase for selling Maslow kits. @bar has been working on getting a distributor to ship them out. He mentions a bit about it in this thread, although there may be other threads that go into more detail. I don’t have the time to keep up with all the threads any more myself.

Check out the swap meet topic on this forum. You might be lucky enough to find someone selling their kit.

Thank you for the info on the s5. I’d be getting it specifically for large print jobs. I would definitely upgrade the heat bed on it to 110v I think and add auto bed leveling. My concern would be print quality with such a large moving Mass. Other option is to build a large corexy from scratch…

Bryan was nice enough to anticipate this and he designed plywood clamps and a dust hood that is made from plywood and a single piece of sheetmetal. It is in the F360 model but hidden. I actually think cutting the clamps out of a piece of 1x4 pine would be the best idea. You could touch them up with 80 grit paper until they fit the router nicely. The dust hood has the groove in it for the piece of sheetmetal so would need to be cut on Maslow.

I’m not entirely opposed to printing things for people but with how quickly summer is disappearing on me it could be quite awhile before I get to it.

I second what @Shootquinn said about the alternate wooden components. I wanted to make sure people in your situation would be able to make the 3D printed parts somehow. I also like what Quinn said about using solid wood for the clamps as opposed to plywood. That should certainly work better than plywood.

I presently both don’t have my printer set up, and am concerned enough about the print quality from my printer that I don’t want to sell prints at this time. When I build a better printer or improve my own, that will be subject to change

The BOM for the stock Maslow is in several places. The biggest issue is the worm drive motors. Etonm, doesn’t like selling small quantities of them and can be tricky to acquire. @Gero did post a BOM in this thread:

Somewhere else to source the parts? No Judgement

Well, I did not say there is a shopping list. You need to get that list together. Understandable. A complete kit could save some time though. Hope someone near you puts a kit up for sale. That’s a game killer unless you download the design files for the motor shield from GitHub and have the shield made in some PCB house. You would also need to crimp the motor cables yourself. The BOM.txt from /Mechanics on GitHub Frame BOM: 8 x Cup Hooks 6 x 1.5mm Pullies 2 x S-hooks 2 x Idler Sp…

Just wanted to say thanks for your effort in designing this. While I am going a slightly different direction with my Z-axis, the dust hood you put together is too good to pass up. 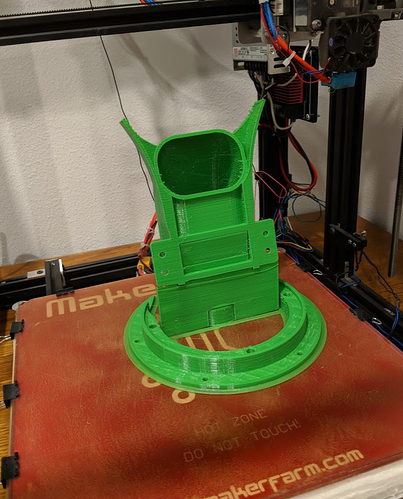 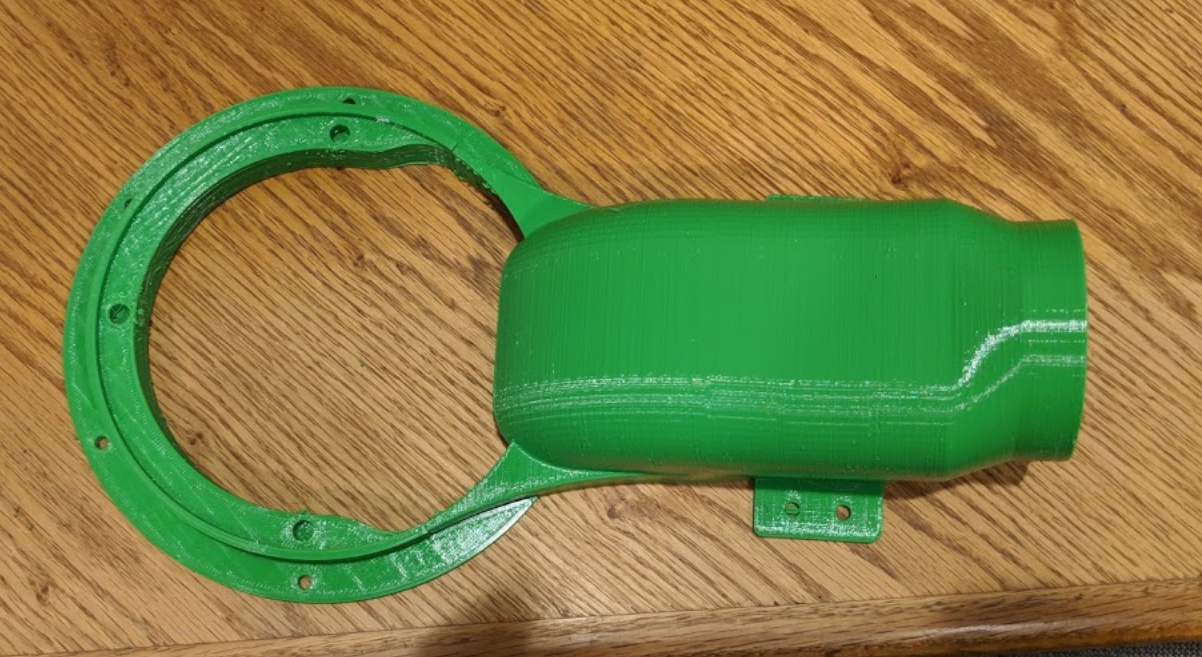 I was able to print an acceptable version on my printer in PETG. I printed it standing on the vac-attachment end, and used a brim to make sure it did not come loose. Not a perfect print, but with a little cleanup, it will be perfectly functional.

Thanks again for your effort.

Wow that is impressive!

@MeticulousMaynard did the hard part, all I did was load the model he created and shared, rotate it into position, slice it, then load it into my printer and press print. About a day later, I have a serviceable dust hood.

Are the 3d print and dxf .individual files available? Can’t seem to locate.

I also would like a copy of this file (stl format preferred).

For those that have built this how good is the dust collection? I understand the need for the clear plexiglass cover otherwise the routers internal fan would blow dust everywhere. I’m considering making something similar but more universal to work with almost any router. Seems like the commercially available hoods have complaints about them cracking under hose weight.

DXF is up in the community garden!

Took me a little while to consolidate everything into the file. The sled now has the holes for the ring system, the 45 degree linkage, and the top mount linkage. When you go to cut it, simply use the holes you need for your system. I’ve broken them out onto the separate layers to make it easy to identify which holes you’ll need.

All the files for 3D printing are in the “STL Files” folder in the community garden.

I understand the need for the clear plexiglass cover otherwise the routers internal fan would blow dust everywhere.

While I haven’t used the setup myself yet, my hypothesis is that the fan will help in some capacity. There isn’t too much of an opening for the air, so it will probably mostly “wash” away along the face of the sled. Some of it will make it in through the central hole, and this is a good thing. It will help with airflow in that space. If you watch the router with the stock base on it, that fan helps kick up the dust so that the vacuum can more easily take it away. Needs to be tested, however, so we’ll see if it works as intended.

I got my new z axis up and running and it is so much better than the original setup. That being said I think I am going to 3D print some more of the parts and tweak it some more. The issue I am running into is with the motor being flipped from the original design my touch zero is no longer working. My pitch is set to -19.2 and it works fine when cutting. For some reason when I run the touch zero though it raises the z instead of lowering it to the board. Any thoughts? I’m sure there has to be an easy fix for this.

That’s strange, but here’s something to try. The ‘Touch Zero’ button sends

where plungeDepth is taken from the Advanced setting “Max touch Z-axis plunge”. Would you try changing the sign of that and let us know if that makes it run correctly?

Could you also perhaps start a thread with info/instructions on this touch zero of which you speak? Sounds intriguing and I would love to add it to my machine.

Yup that did the trick. I put in a negative value and now it goes the correct direction. Thank you. @TalleyMakeWork, I won’t be able to make a video, but let’s see what we can accomplish. The approach hasn’t been adopted by enough users to turn that on yet, the ‘greyed-out’ button is a place holder for now. For now, I use one of the Macros to...

All of the info is in here. If you update to the current software and firmware it is now integrated into the z-axis command menu so you don’t have to use one of your precious macro buttons for it any more.