If anyone is interested I ordered control boards for the TLE5206 as I wanted to build one of blurfl boards http://maslowcommunitygarden.org/TLE5206-PowerControl-Boards.html . I have more than I need if anyone is interested I will ship them at cost + $2.50 per PCB (the proportional cost of the complete order). I have 8 available.

If you are willing to accept it going though the standard post I can ship one for less than a dollar in the US.

EDIT: This is for an unpopulated shield pcb. You will need to acquire the parts on the BOM (build of materials) and solder the parts to the board. 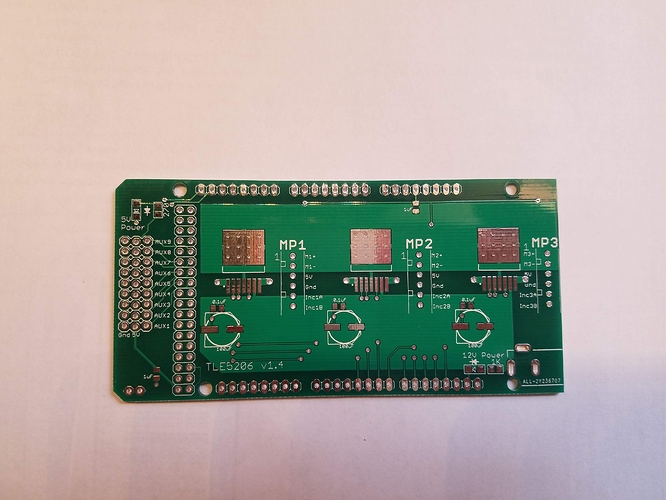 Put me last one the list please. If you don’t get the last 2 sold (I doubt that) , I will take them.

What is the cost?

For those that aren’t as tech savvy on pcb/cca design, what are the main advantages to this card? From skimming the thread, this board has more “horse power” and can detect/manage/minimize overheating due to it’s design (better chips, better heatsinks, spread out, dedicated chip for each motor). Any others for those that don’t know what a soldering iron is?

I also saw talk about Bar ordering a bunch of these - is that still the plan?

It also looks like no modifications need to be made as the firmware supports both Bar’s original card and this one. Right?

Is there a new board coming right around the corner with enhancements now that this “prototype” has been made?

The cost is $2.50 plus shipping per board. You can pick the shipping method. Paypal-ed. The whole order of 10 boards were a little more than $25 total so there isnt a profit motive here. I just don’t need 10 boards. (It would have been almost the same cost for me to get less quantity)

In the github for the board you will find a BOM (build of materials) with all the parts needed to assemble. Personally I ordered my parts form Arrow.com as I found them cheaper than mouser or digikey.

I dont know what bar has in store as new development.

This is just a branch design, of the original, that has 3 independent H-bridges (the part that does the heavy lifting). Each H-Bridge is beefier (higher current carrying capacity). The board design includes a better thermal dissipation to the board. And since there are 3 chips rather than 2 the heat is spread out more.

The board does not include thermal and current sensing feeds back to the Arduino BUT other board designs with firmware changes could make this possible with little BOM changes.

I also saw talk about Bar ordering a bunch of these - is that still the plan?

It sounded to me like @bee was doing a batch so I decided to wait. I’d like to be the supplier of last resort and just sell the parts that nobody else in the community wants to sell.

If you are just getting into smd soldering this board isnt hard and I would say it would be a fine project to begin with.

The H bridges & the heatsink are the highest cost parts. The H bridge is large and resilient. The other parts are smaller but are fractions of a cent in price. So buy a hundred for a dollar or so and learn a new skill.

You dont need a heat gun or hot air. A simple soldering iron and electronic solder + a set of tweezers and you should have what you need to do the job.

So you have to solder all the parts on the PCB?

So you have to solder all the parts on the PCB?

Yes, this is just the PCB.

So, what parts do you see as “seller as last resort”? Motors, rings, stock controller, wiring harness? Anything I’m missing? The two motors seem the be the hardest to obtain.

The two motors seem the be the hardest to obtain.

Correct, the SAME motors as bar used are difficult to source but there is nothing saying you cant get other motors. Maslow is really a framework to explore. Want to build one that the size of a building, AWESOME. Want to build one that fits on a table. That’s cool too. With that being said this is only the PCB board no components on the board no other parts. (hense the low cost $2.50)

PS: if you do build one as large as a building or ultra small take some pictures as we would love to see it.

Oh, I was hoping for a through hole version. I guess you will have more requests then boards.

I chose to build the smd as the parts are commonly cheaper and the SMD H-Bridges have better thermal properties when attached to the PCB.

The heat transfer is interesting. Without research I would have expected the large heat sinks to perform better. Anyhow both versions will not get hot from what I can tell with the through hole version (fingertip test). Perhaps I just like the steampunk look

@JDogHerman I wan’t one but am first interested in estimate of the total bill of goods needed. And would ask if you or another would be willing to assist with my dumb build questions. I don’t want to be a burden to anyone, but if ya’ll enjoy this kind of exchange bulding things togther I’m game.

For what it’s worth - This discussion is Surface Mount Devices version of the board. I’m not in to SMD soldering, my thread is about making the Through Hole version. Same function diffrent design. This is a bare circuit board, I’m making completed Shields. There are 13 separate parts needed in varying quantity.

I’m just trying to show the differences in the discussions.

If you are in to surface mount soldering this is the place for you.

If you are in to surface mount soldering this is the place for you.

If we’re not, is there a card being developed or ready to purchase?

This is the non - SMD version in the thread below.

I’ll have one or two if you ship to Denmark?

If anyone is interested just send me a private message. When the boards are all claimed I’ll announce it on the thread.