Unexpected movement at the end of project

Good morning! This is the second time I’ve had this issue and hoping you can help.

I generated the image from Easel’s Image Trace Feature, added a border and tabs. Once the carving was complete, my Maslow (which I just love watching work) went to return to the home position but didn’t raise the router bit and cut the line you see in red on the attached photo. I have no idea why this happened.

This occurred a couple of projects ago, but just once so I thought it was a one-time event. Since it’s happened twice now, I was hoping the collective could help me determine the issue and how to avoid it in the future. I’ve attached the G Code generated by Easel.

Disclaimer- I’m not a CNC or tech guy…this is completely new to me and I’m having lots of fun. However, if your response is anything above a 12th-grade math level, I may ping back for further clarification.

Thanks in advance for your time and help! 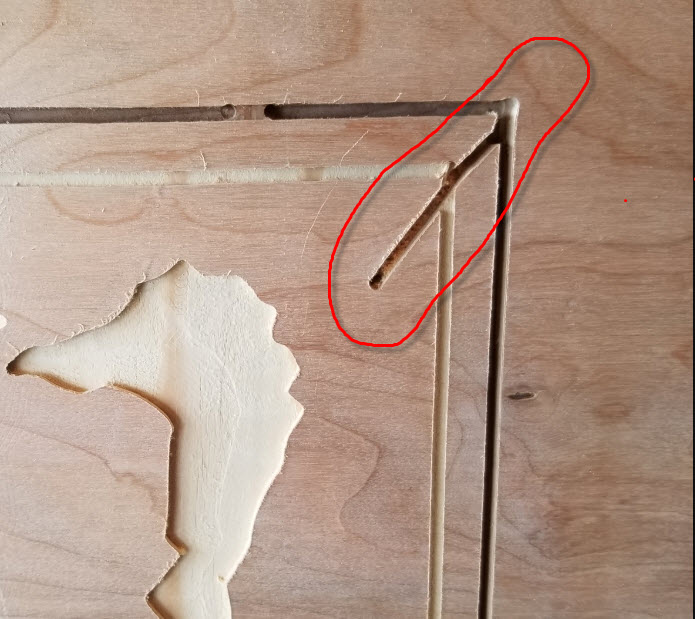 I can’t readily see anything wrong in the gcode. It is supposed to raise the z axis to 0.15 inches prior to moving to 0,0.

Is it possible that the z-axis control arm popped out of the router’s socket? This has happened to me a few times in the past and the z-axis never raised back up when it should have.

@madgrizzle, thanks for the speedy reply! That’s a great question and I’ll check to see if the z-axis control arm has disconnected from the router.

@madgrizzle I checked and the z-axis is firmly connected to the router and looks like it didn’t disconnect. I ran another project and I didn’t experience the issue (although I had my finger over the mouse to slap the STOP button just in case)

I agree with @madgrizzle hunch that something mechanical is going on. Do you ever see any other strange z-axis behavior, or is it only at the very end of the project? Could the cable to the z-axis have come loose?

Are you using ground control or webcontrol?