Below are several screen shots of Etonm motors that could be used to replace the stock Z axis motor, which many feel is too slow.
The first motor I think is the stock motor. Each motor chart shows the various gearing and resulting rpm and torque as well as amps drawn. Highlighed in blue are possibilities.
Our kits stock Z motor is currently 100rpm and it works fine. My gut feeling is it could probabaly be increased to 150rpm. I’m not sure anything faster than 150rpm would really save that much time? And the torque is 10kg.cm which works fine, but if one has a really tight bungee it can stall out at the top of the Ridgid’s movement.
So I think torque needs to be 12kg.cm or more. speed 48 to 150rpm.
Last two motors are a fatter 51mm but this is easily solved with a different mount
So my question is can the shiled handle 0.85amps? Any reason to go with one motor over the other? I think price will be pretty similar, give or take $5 usd. 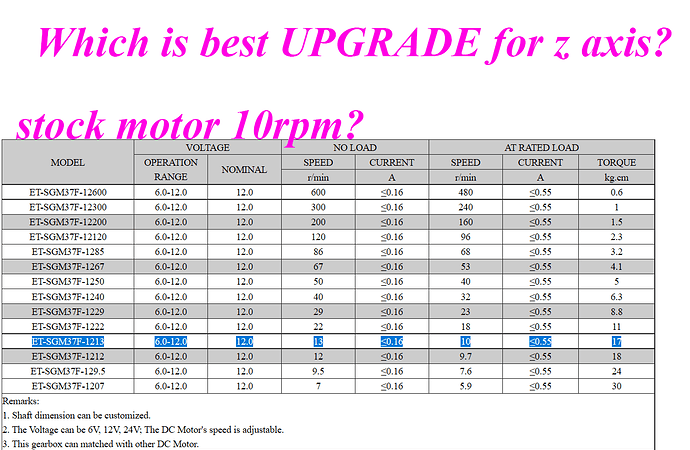 We are currently using the 100rpm version of this motor on a z axis,but with out a proper z axis I think more torque and slower speed might be best. Usign the 55rpm speed the torque would be the same as the stock or we could bump it up to 71rpm with a torque of 14kgcm. As mentioned above at 100rpm / 9.9kgcm torque and a strong bungee the 100rpm version can stall at the top of the routers z axis range.

nobody (including Bar) has done any testing as to how much power the Z motor
needs to have. The motor shield handles 2A per motor, but the power supply is
only 4A total, so you may need a more powerfule power supply if you do combined
movements (like vcarve would do)

The Maslow was initially designed with no motorized Z axis, it was added during
the kickstarted at the demand of the future users, and Bar picked a powerful
motor, ordered it, and it worked (and was better than doing it manually) so
created an add-on for the kit.

It would be really good to have someone order a bunch of motors and test them to
find how much power is really needed. I will donate to anyone who is willing to
do this to help offset the cost of the motors.

so unfortunantly the answers to most of your questions are “we don’t know,
nobody has tried it”

the 55rpm will work for sure because it has the same torque as stock motor and be 5.5x faster
the 71rpm will work too, but might require a bungee that is not as strong. 7.1x faster than stock.

Which one of those two do you think would be best for direct drive of the Ridgids Z axis? Currently using the 100rpm @ 9.9kg.cm and it works fine, but if one uses a strong bungee at the max height the motor can stall if bungee is too tight.

Personally I am not a fan of the ridged Z axis too many issues and frustration equals bad branding for the Maslow CNC. Better to include a real Z axis for $30 to $35 with the kit. IMHO.

edited to add I think you get these messages via email so you might not have seen the motor table photos I posted in the original post.

Is a “bunch of motors” really required?

not a bunch of speeds, but probably several strengths to find how much we need
to properly move the router.

there are a lot of different options for bungees, Instead of a short bungee
going to the bolts on the handle, I shot a couple screws into the outer edges of
the sled and used a long, flat bungee going to those, so that the tension varies
less as the router moves up (the difference in the bungee length is a much
smaller percentage, so the tension goes up far less), I ended up having to tie a
couple knots in it to shorten it just a smidge.

I did look at the post in a browser, but hadn’t noticed the small variation in
motor power. (I see the links to the pictures in the e-mail so I know I’m
missing something)

Personally I am not a fan of the ridged Z axis too many issues and frustration
equals bad branding for the Maslow CNC. Better to include a real Z axis for
$30 to $35 with the kit. IMHO.

I’ve got mixed feelings on this, the reports I’m hearing of the metal maslow
seem to indicate that the Z axis is rather weak (in terms of handling side
stress), and I like to use far more aggressive cuts. This weekend I was doing
some 3/4" deep cuts in a single pass with a 1/4" bit (I was going too slow and
let the heat build up, so I cooked the bit, but only after making a half dozen
~2’x2’ panels with what was already a well used bit)

when a bit goes dull, it just stops cutting and if this happens while you are
deep in the wood, that produces a lot of side force on the router as the chains
keep pulling. I worry that a cheap Z axis could run into trouble and get
damaged.

on the other hand, using the router’s depth control is very much a hack, but
it’s an easy hack to get started. (and at the time, we didn’t realize that there
was the need for a bungee, that was figured out after the kits were in the field
for a bit)

I’d want to see more testing of different Z axis options before deciding that
one should be included by default (and in any case, that’s up to the people
shipping the kits)

the variation of motor power goes from 0.55a to 1.1A. The last one actually goes up to 6A which is beyond the stock boards capacity so I guess should not be considered. Make sure you look at the current at rated load.

not a bunch of speeds, but probably several strengths to find how much we need
to properly move the router.

Well the stock torque is 17kg.cm and I’ve never heard anyone complaint It wasnt’ strong enough only that it is slow.
I’ve tested 9.9 kg.cm which as mentioned above works with limitations. That leaves only the 71rpm @ 14kg.cm to test. do you consider that a good speed and torque specs. I think it is good.

Metal maslow has 3 different gantry plates, the latest is custom cut and allows for more side loading. The wider the stance of any Z axis the more stable it will be, one reason why the Bosch pf1400 in Europe seems to do well.

The long bungee is clever, but dont’ want to get side tracked, just want to focus on the best Z motor to upgrade to. Again 55rpm or 71rpm seem to be best candidates and I’m leaning towards 71rpm one.

sorry, when I said power I should have said force.

As long as the motor has enough force, the faster the better in my mind. I’d
love to have confidence in what motor to buy and get a faster one myself.

the 4A power supply could be a limit for some cutting (the sum of all the
motors, but I’m ok with being in a position where all 3 motors can’t be run at
full power at the same time, upgrading to a more powerful 12V supply (or just
floating a car battery between the low power supply and the motor board) is an
easy, cheap thing to do if you do have cuts that max things out.

well the stock worm gear motors are max 1.5A and that might only occur at the top center of the work piece. Seems most projects do not involve moving z axis cuts and even if they did it should not be anywhere close to stalling the motor out.
ET-WGM58A-1220.6
≤1.5 amps

one more thing, you need to look at the current at the rated load, not at no
load.

those are max load amps.

Well the 55rpm one has the same 17kgcm torque as the stock and is 5x faster so if you want to be conservative just get that one. if you want to push your luck get the 71rpm one at 14kg.cm torque.

those are the two best options out of the 5 originally listed IMHO.

Those are both 24V motors? Will the shield just take 24 V or will it all have to be replaced?

they can be run at 12V. the 100rpm motor just above those 2 is the one we current use and we run it on 12v power. I am not sure if the factory changes the wiring somehow, but they do specify 12v on the label so it’s not an issue.

So if the motor wattage stays the same, then the current doubles if you cut the voltage in half or the torque drops off significantly?

if the amps doubled it would fry the motor. the speed might decrease, but I think the factory rewires them, I can run some speed tests on the 100rpm motors we have to see if speed is reduced. that is what would happen in theory and torque would stay the same. Anyways the 55 and 71rpm are the only viable upgrades I see and even if the speed is reduced still much better than stock z motor.

What do those motors cost? I’m looking at testing some code and so I’m setting up a second system. I was thinking of just using 12V car window motors because from the salvage yard they are $19 and readily available. I was going to power them with a 30 A 12V server power supply, though I don’t have the H-bridge setup determined yet, but I do have a couple different options for encoders. If these motors you are discussing are reasonable and available, that might be a good option for me to get a couple.

Around $20. Much cheaper in bulk

note that these motors are only appropriate for the Z axis, the other two motors
need to be much more powerful.