Z-Axis changing zero before or during cut?

I bought a Maslow about 2 months ago and have been slowly building it as I have time. I finally got the everything put together and successfully finished the calibration. I can move x,y, and z axis just fine. I haven’t fully measured accuracy, but if I tell it 1in left, mark it, then 1in right, and measure, it gets close enough for now. So I decided to start cutting the new sled.

I made my own version of the sled and brick holders in Solidworks, as I wanted precision mounting holes for the router, some pre-drilled locations for the various bracket screws, and a fillet done with a ball-nose. Other than that, it’s the same sled design. I moved the solidworks parts over to Fusion360 to do the CAM so that I can do tabs more easily. I also grabbed the maslow specific post-processor from AutoDesk for final exporting.

I decided to start with the brick holders, as they’re smaller and faster for initial testing, and no tool changes. I used GC to move my sled to where I wanted the part cut out and hit ‘Define Zero’. I then opened up the z-axis controls, touched my bit to the wood, and hit ‘define zero’ there as well. I then tried running my g-code.

It’s set to raise up 0.2in at the start, which it does and the DRO says 0.2 for the Z as well. It starts cutting the first hole, and I watch the Z DRO and it says it gets down to the target depth. It then goes to raise it back up to 0.2in before moving to the next hole, and this is the start of the problems. I marked where 0.2in ACTUALLY is on the router body. Instead of raising there, it raises a whole 10mm higher. However, the DRO on GC says it’s at 0.2in. Then when it goes to the second hole, it assumes it’s actually there and doesn’t get anywhere close to target depth. So then I checked the hole it cut, and sure enough it’s no where close to the actual depth it’s supposed to get to. Unfortunately I didn’t get an exact measurement, but I think it was around 0.25in, maybe more.

If it was only 1 or 2mm, then I would blame it on the crappy z-axis, but this seems a lot more like the control software or my G-Code. Does anyone have any suggestions as to why it seems to be changing my Z height by 10mm? I’ll be trying the same CAM later today but with the generic grbl post-processor to see if that fixes it. Other than that, I’m out of ideas.

edit: I saw somewhere that someone was having similar issues (on a smaller scale though) due to the router power being next to the z-axis motor cable. Just wanted to get it out of the way that mine are not near each other.

Hello, I could check your g-code visually, if you like.
I would set the sled on a table, write a simple g-code to move the router 10 up and 10 down repetitively and monitor the mechanics to find a clue. What z-axis mechanism are you using? Kind regards, Gero

I tried uploading my g-code for someone to review with the original post, but I’ve just made the account so it won’t let me. Here’s a link to it on my google drive

As far as Z-mechanism, I’m currently just using the default with the Ridgid 22002 depth setter. The only issue I can see is that I don’t have a pre-load on it, so sometimes the backlash doesn’t cause it to move immediately. However, there is no way there is a whole centimetre of backlash. Besides, I would anticipate backlash to cause it to not raise enough, not raising too much.

I’ve worked on several machines before, and I really don’t think it’s the mechanics of the machine. My best guess is either my G-Code (likely, as I don’t usually use Fusion for G-Code), or ground control itself. I’ll try writing my own G-code that just moves the Z up and down a few times and see if the positioning is repeatable, or if it does the same thing there as well.

The g-code looks clean on camotics and bcnc. Highest Z in the code is 0.2.
If the router ‘jams’ on the way down and something gives way, GC would have counted a move into the material that did not happen. If the way up is clear, that could result in a higher end position. Just guessing. There are post here about cleaning the router-base inside from a ‘molding-joint/scar’ as well as upgrades and tuning for the locking mechanism.
From the g-code i would say the problem is mechanical. Having that said, I don’t know how GC deals with this strange ‘lead-in/lead-out’ at every pass. It should however not result in a to high Z. 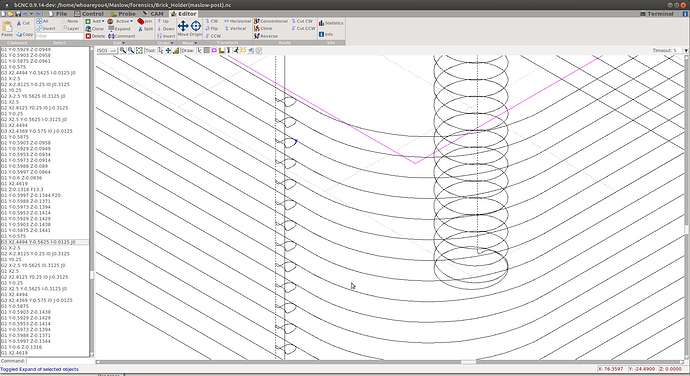 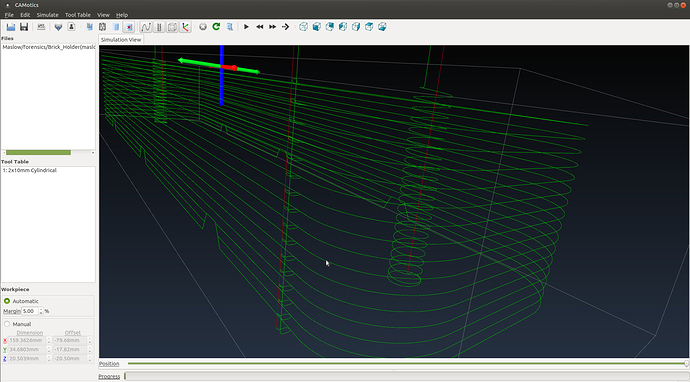 So while testing some Z-axis g-code, I noticed that sometimes the Z-axis wouldn’t retract at all. So I felt the orange nub on the ridgid body, and noticed it would pull in slightly while the z was trying to retract. So I took it apart, and the plastic ‘nut’ was nearly worn down. So it seems I have to do z-axis ‘upgrades’ before I can even use the machine. It’s more like I have to build my own z-axis in order to even use it. I’d much rather just spend an extra $50-$100 for them to send me an actual Z-axis. Overall, I’ve been incredibly annoyed with the Maslow. I’m at the point where I’m just going to try and return it and spend an extra $500 for something more similar to a Shapeoko

Well after talking to who I purchased my maslow kit from, they won’t accept returns… So I guess I’m stuck trying to get this working. I can upload files now, so I attached a picture of what my z ‘nut’ looks like now. My best guess is that because It’s so worn down, whenever there is the slightest amount of resistance during a plunge, the z-axis skips a thread, so it doesn’t reach full depth. Since it’s now losing z-axis height, it raises much further than it should since there is less resistance when raising up.

My temp solution so I can at least cut things (like parts for a meticulous z-axis) is to get a 1/2-8 acme nut from McMaster that I can then super glue onto the piece that actually moves the router. Then remove the orange plastic piece. For anyone who wants to do something similar, I’m using super glue over epoxy, as super glue can be removed with heat or acetone. Also going to wrap the lead screw in teflon tape, as super glue doesn’t stick to teflon. This will prevent the nut and screw from being glued to each other.

I designed a more robust 3d printable part. I haven’t uploaded it to
thingiverse as I haven’t been able to get to where the machine is to test it.

with the stock setup, it’s easy to strip that orange plastic part by running the
Z axis too far in either direction

but a solid metal nut will be more reliable than my solution.

I don’t have access to any of 3D printers at the moment due to the pandemic. And from experience, I refuse to use 3D printed threaded parts for anything that can see reasonable force. And if an injection molded piece has worn out, a 3D printed part definitely will.

Plus, the metal nut I linked to is only $3 before shipping. And mcmaster usually ships free to me as they have a warehouse only a few hours away. And if they don’t for you, I haven’t met anyone who doesn’t always have other stuff they can get from McMaster to help spread out that shipping cost.

I’ll post some photos and results of how my metal nut solution goes for anyone’s future reference. Ultimately though, something like the meticulous z-axis needs to be used.

I’ve seen that orange part referred in the archives as a “mechanical fuse”, if the router is driven to far up/down, that part is supposed to strip. Past threads recommended getting several at a time. Part number: Ridgid 513396001
Not confirmed.

I don’t have access to any of 3D printers at the moment due to the pandemic.
And from experience, I refuse to use 3D printed threaded parts for anything
that can see reasonable force. And if an injection molded piece has worn out,
a 3D printed part definitely will.

part of the problem with the stock design is that it’s multiple thin layers so
that it can do the ‘quick disconnect’ thing to rapidly move a large distance,
but that also means that not only can the plastic wear, but so can the metal,
and as it wears, the metal starts slipping into the thread on the rod and it
hangs at an angle (which makes it much easier to slip out of position)

Plus, the metal nut I linked to is only $3 before shipping. And mcmaster
usually ships free to me as they have a warehouse only a few hours away. And
if they don’t for you, I haven’t met anyone who doesn’t always have other
stuff they can get from McMaster to help spread out that shipping cost.

no question that the metal nut will be stronger.

Another Z thing to think of is your cable routing.

If you neatly cable tie the power supply and the Z spindle ribbon together - don’t be surprised if the two cables interfer with each other. Even worse with DC spindles.

My kit worked fine with the spindle not spinning. Z motor was still when not being asked to move.

Start the spindle and the Z axis started to dance a jig, going up/down sporadically up to 50mm when the cutter tranversed 100mm left/right/up/down.

Now the ribbon cable comes from the cieling and the power lead drags on the floor. Result perfection.

So it seems a 1/2 x 8 acme thread is not right somehow. Despite the lead screw being a half inch in diameter, and having 8 threads per inch… I doubt it’s metric, as the OD of it measures something like 12.6mm, which isn’t close to a standard thread pitch. Who knows, maybe Ridgid decided to do some custom threading for whatever reason.

Regardless, it looks like I’ll be buying 2 of those plastic nuts to try and last me through cutting parts for a meticulous Z-axis. So fair warning to anyone who wants to attach a legitimate Z-axis nut in the future, it seems that it’s not a 1/2 x 8 acme screw. You could try buying a couple different sizes and seeing what fits I suppose

hmm, I purchased a 1/2 x 8 tap and that matches the lead screw on my routers.

Was your tap left or right handed?

right handed (after I accidently ordered a left handed version)

So I brought the parts to a local machine shop to have them double check. They said they’re definitely both 1/2 - 8 right handed acme threads. But they think the clearances are just too tight. They recommended putting a tap through the nut, but I can’t find one anywhere. Where did you purchase yours? 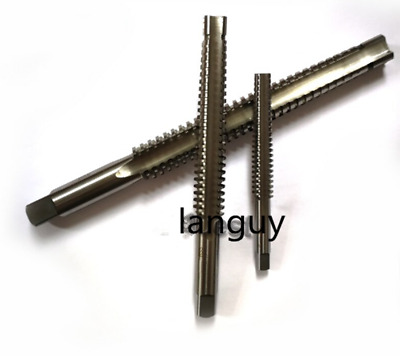 There are a variety of sizes available but they are not all listed.