I thought I would share a good project you can make on the Maslow with the group. Like the 3-way pedal car, this is not a free plan, but well worth the small price (18 Euro). They also offer a number of other “Free” plans and plans to DIY a number of shop type tools…

For the smaller projects, that are not practical for using the Maslow, I also have a desktop “Manual” 3D router system. It is fantastic for working on smaller pieces and will allow you to duplicate parts and work from templates. I used this to round off the edges of the 3-Way pedal vehicle’s steering wheel (routing work was done when layers of the part were assembled)

I am pleased with it and highly recommend the plans (They are metric designs and very well documented). Here is a picture from the website: 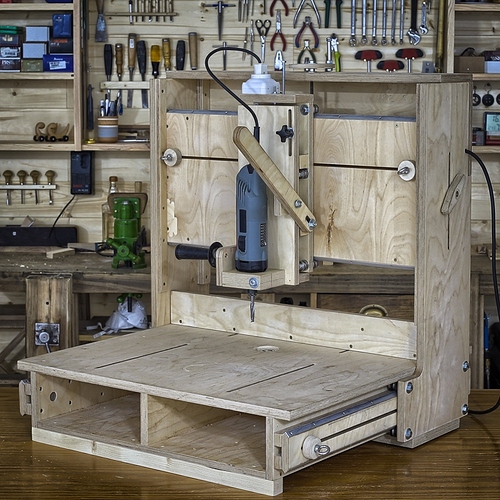 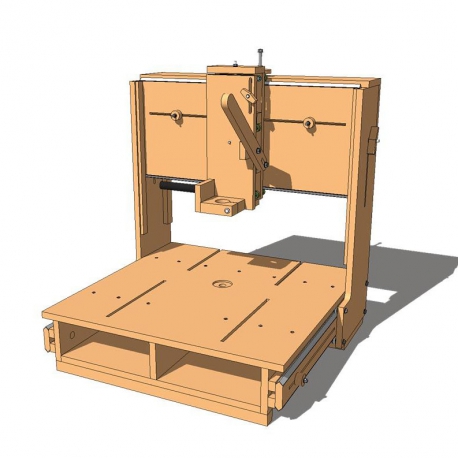 Homemade Router 3D, do it yourself three axis tool, versatile and cheap, you can do milling, holes, copy milling in 2D or 3D objects .

This in fact is why I bought a Maslow!

Love to see when others have discovered the same treasures. I recommend that you upgrade to the new bearing design right away (I did). All in all, it was a fairly straight forward build. Consider changing the vertical lead thread to something more course as it takes forever to raise and lower. I built mine using all metric parts (too lazy to convert everything).

This pattern would make a great frame for a DIY small CNC machine.

I am planning on finding v- groove bearings that are close enough (while seated) that I don’t have to rabbet or alter everything that Susa did. I have seen many different sizes since he directed us to what he found. Does this sound like a good plan to you? Also do you think with the bearing upgrade that aluminum is still good for the track?
I hoped CNC could be an option!
When I first saw your post I thought I put a file where I hadn’t planned! Then I realized. I, too, was excited because I

Love to see when others have discovered the same treasures.

I have thought more and more about how the Maslow and Paoson (3-D Router) compliment one another as the Maslow can take it’s time to cut out detailed templates while the Paoson will be able to later round corners and (with creativity) be able to put gradient qualities into projects. Plus, I believe, we can use discretion to cut things out faster when following.
I have so much I want to say and ask!
What did you do to get the plans to be cut out by the Maslow? I was just going to try scaling each image with MakerCAM but last time I measured, it wasn’t cutting perfectly in reality.

I have been building my “retirement” tinker’s shop for the past three years (built from the ground up). The shop is two stories, the upstairs houses my paper model collection (20,000+ un-built models) as well as my 3D printer station and storage. {If you don’t know what a paper model is, google it. Fun and inexpensive hobby}. The lower level is for wood and steel working.The more I got into the wood working side of “tinkering”, I realized that the conventional tooling would not do for me. The stuff at Lowes/Home Depot were not geared for my kind of creativity and required a lot of skill to master each tool and tons of jigs to do what I could dream. I had originally stocked the shop with the standard wood working tooling and then some (radial arm saw, band saw(s), drill press, sanding machine(s), lathe, thickness planer,etc). These were find for simple projects (garden benches, planters, etc) but I wanted more modern tooling and methods. I purchased a good used Shopsmith system (I actually bought 2 basic systems so I had spare parts - one is in my son’s garage) with all the attachments I could afford (Fantastic machine!) and this helped as it could perform a huge number of tasks on a single machine. At the same time as I was getting the Shopsmith lined up, I started on the 3D router.

If you happen to live or your travels bring you nearby the Savannah Georgia area and want to visit, you are more then welcome to come see my Maslow and 3D router.

If you stop by we can “chew the fat” (so to speak) on the systems. I have my hand written notes for the 3D router someplace (mostly cryptic notes) that I will share (If I can find them).

The complimentary nature of the two systems is exactly why I purchased the Maslow. I came from it from the other angle (I think). I felt that I could handle cutting the main pieces with enough accuracy to suit my needs and the 3D router I planned only to use for trimming (as you noted) and for some pattern duplication for smaller items. I have been making toy guns for my grandchildren for years and have templates made. I wanted to use the 3D router to cut out the templates so they could build and customize their own.

Building the 3D router facilitated the “Need” for the Maslow. I had such a hard time getting everything square and true that I figured the Maslow would be the answer (and it is for me). I had been following it on Kickstarter when they were live, but could not spend the money at the time to buy one. I built my Paoson 3D router before I got the Maslow. It was done all by hand. The upgrade requires some modification to the design. As I remember, the side rail thickness needs to be reduced as does the horizontal rail support. These are the supports that the V rollers ride against. I use V bearings I got on eBay (good price of 20 bearings for $30).

What I used were described as: RM2-2RS 3/8’’ inch Track Roller Bearing V Groove Rubber Sealed 0.375". Be sure to check out his “Instructable” post on the build. It includes videos, etc. It was very helpful for me. Title: “3D-Router-When-a-CNC-machine-is-overkill”. 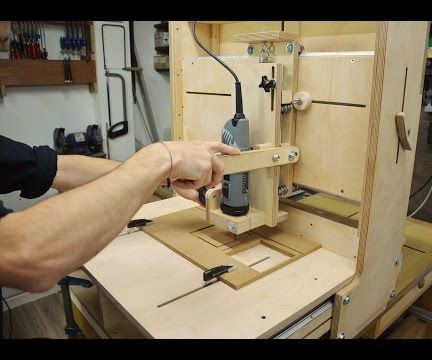 3D Router: When a CNC Machine Is Overkill.

3D Router: When a CNC Machine Is Overkill.: The idea arose after dealing with the difficulties and loss of time in preparing for certain CNC jobs. Sometimes I spent more time preparing for the CNC than the work itself. With this manual router, you...

I was so worried about messing it up that I did everything possible in Metric (bolting, dimensions etc) and did not want to “Tweak” the plans. I did change the bolts that hold the bearings to US standard inch sizes (3/8") as noted in the Vee bearing description. The aluminum worked just fine. The “V” rollers if your system is built square do not wear the aluminum enough to be any issue.

I highly recommend that you redraw everything in a cad program so that you can get dimensions changed and redesigned for English units. It has been needed for a while, but Paoson works in Metric and does not want to do the conversion. As I recall, he provides everything in sketchup and as dxf along with his pdf plans. I would learn one of these program and update his design if you don’t want to start from scratch. I am fluent in Solidworks and do not want to take the time to learn sketchup. I could have modified the dxf file provided, but Autocad dxf files are not as easy to adjust for me as Solidworks (SW) files are and I want the ability to do a virtual assembly of all parts (3D) to verify fits, etc. I can not do this with any of the free autocad compatible programs I have found.

I started to model the entire thing in Solidworks and have all (?) parts generated as solids, but did not finish it. I am sure I got side tracked by the arrival of my Maslow (

). If you happen to be SW user, I will let you have the solids I have generated. I may also continue this project in the future converting to English units and incorporating the bearing upgrades.That was my original intention, but have not found the time to continue it. I have thought about making them and selling them as completed kit.

Would you have considered purchasing a prebuilt (or just precut) kit of this?
If so, what would you consider as a fair price (without router)?
I was thinking of around $150 built, $120 as a kit.

I had planned to send any upgraded (english converted plans) to Paoson so he could check it and include with new plans he sells. I know a number of people have asked for the English version (you are not alone).

In case anyone is interested, Here are photos of some of the wood toys I have build for my Grandchildren over the years. (Not re-posting the biplane photos) 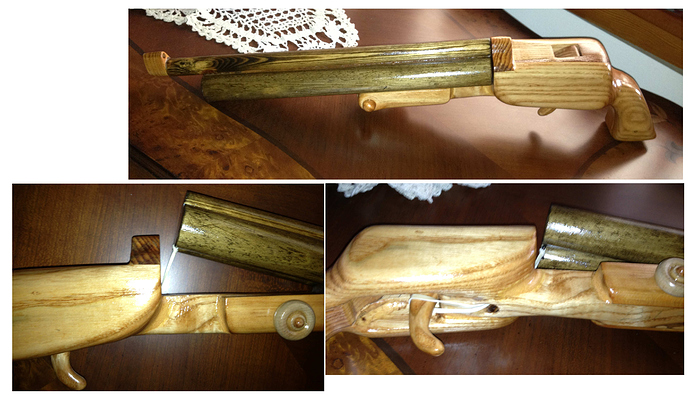 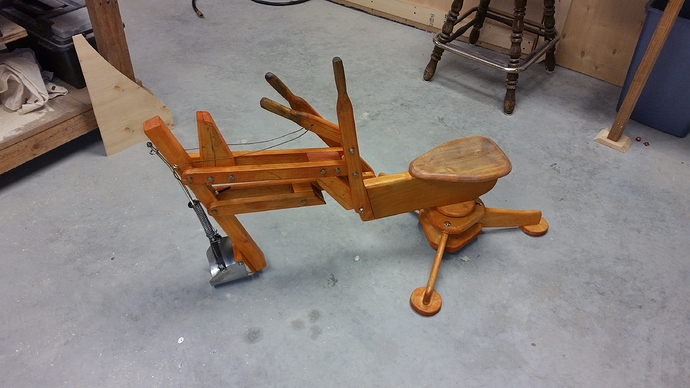 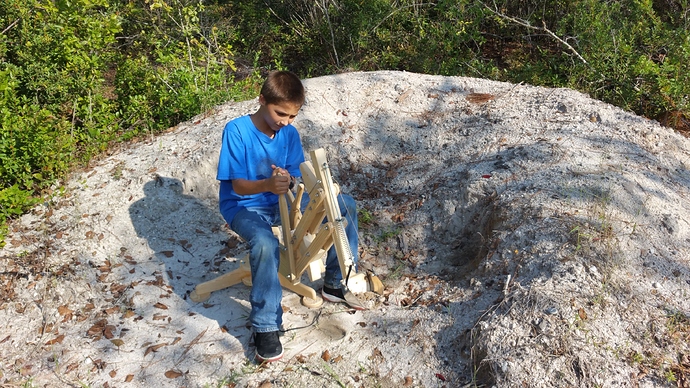 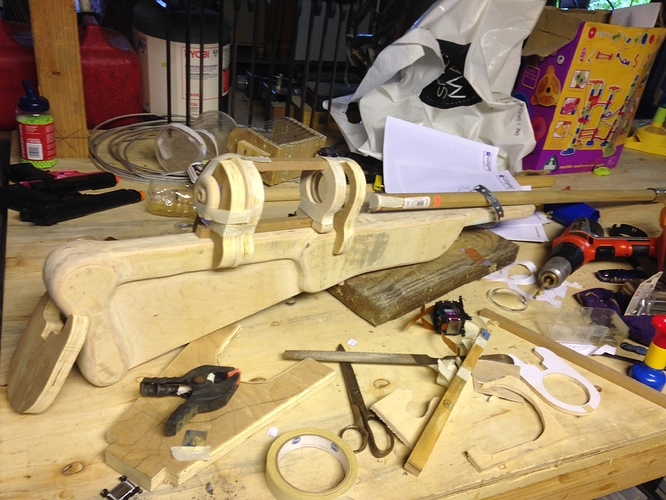 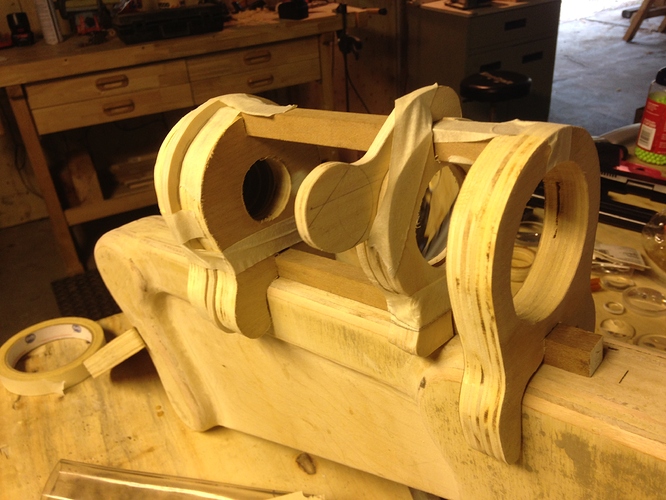 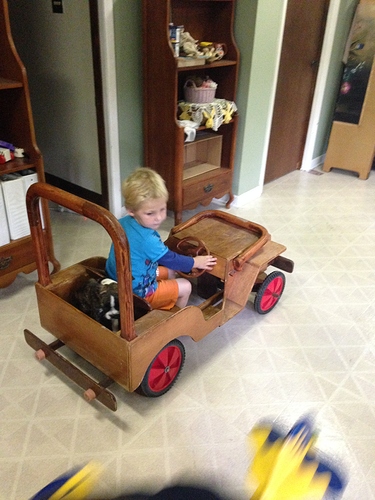 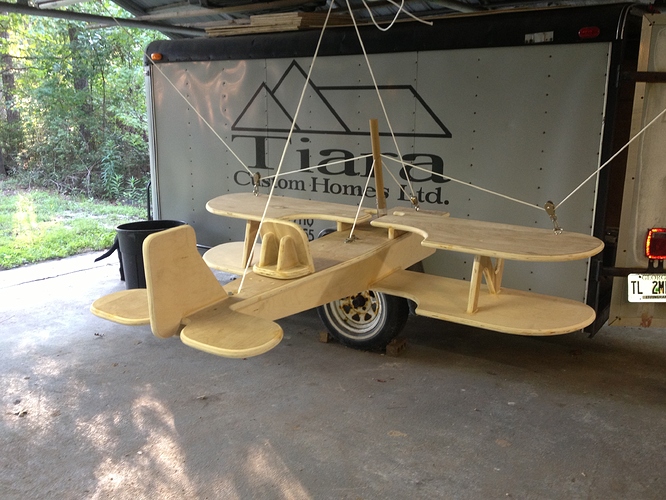 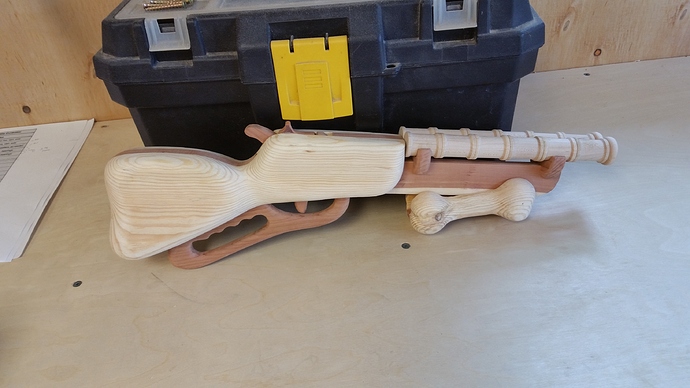 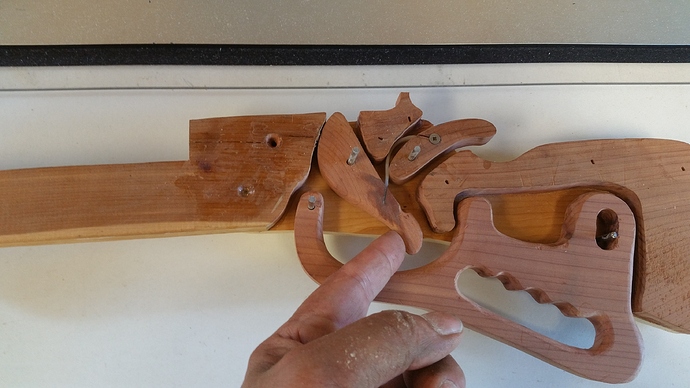 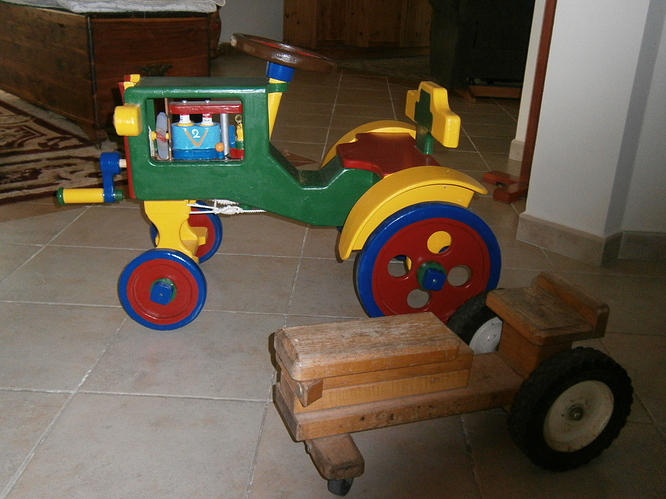 P82100014288×3216 3.18 MB
Ride on tractor (engine moves, fan blade turns when crank in front is turned).
The wheels are designed to be taken off by child using wooden wrench.
(The “Cross” in the seat was done “on purpose” - Lived in Dubai (Muslim country) at the time I made this) 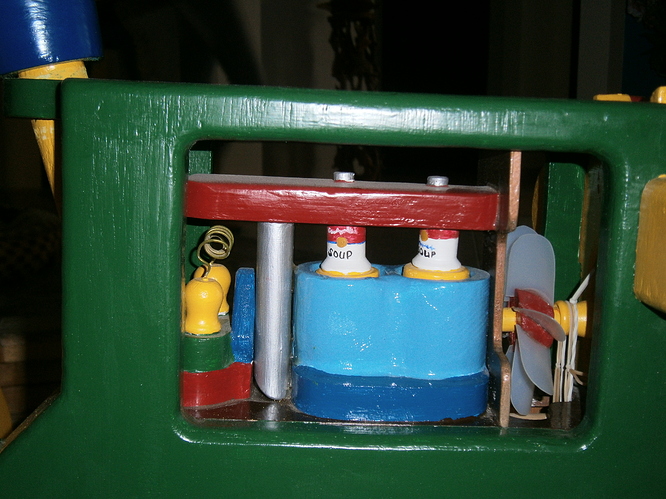 Wow! This epitomizes much of my thoughts.
I would consider purchasing it completed at that price for sure.

I have purchased the plans and am trying to figure out how to cut it accurately with the Maslow but I also paid over $50 in ink to print everything. At the time I hadn’t heard of the Maslow and decided to get the Maslow for the Paoson and other obvious reasons. Fortunately, the many distractions of the Maslow never took my mind off of the 3-D router.
Would you recommend that I use the printed templates to cut it by hand? Would this be more likely to get it done accurately (maybe accomplishing it at all)? As much as I am loving the Maslow and would love to cut it from Ground Control, I have wanted the “Paoson” longer.

I assume that the prints you have are to scale, correct? If so you should be fine doing it manually. If you have the patience and time do it on the Maslow. He provided the dxf that can be easily manipulated to reposition parts and make the G code.

When I get back in the shop I will look at (& for) the dxf files. Thanks!
I’ll do some test cuts to see if I can get the measurements right.
One way or another I’m grateful for the encouragement to further my plans!

hello James,
I’m Suso from Paoson Woodworking.
You have a very beautiful workshop, and the 3D Router has also been great! I would love to have some photos to share on my website, would it be possible?
My email: info@paoson.com

Welcome the the Maslow Forum.

I sent you an email with the pictures. I am currently between major projects so I will get a few “clean” shop photos to you. I just completed the Z upgrade and hope to be onto my next project soon (day job is keeping me too busy right now