Calibration, off center and skewed

Hello,
I ran the triangular calibration and all the marks are placed as expected, except that they are about 3 inches left of being centered. And they are a bit skewed to the diagonal in the clockwise direction. For example, when I place the tape measure to measure the horizontal distance from the left mark to the right mark, the tape measure is not horizontal, but slopes down from the left mark to the right.

I entered the measurements as directed, and ran the calibration again, and it moved another 3 inches to the left, and became even more skewed to the clockwise direction. I ran the calibration a third time, and it did the same, so that the left most mark is very near the left edge of the plywood worksurface, and the skewed angle is even worse. After the third try, the right marks were about 2 inches lower than the left marks. My assumption is that the left and right marks should be even.

I think I am not understanding the triangular calibration process very well, or I simply have some wrong settings. I would appreciate it if someone could provide some insight to what is going wrong.

I am not sure which of the settings to post that might help the smart people diagnose the problem, so my apologies if I have not provided enough information.

I have set up the Maslow according to the instructions. The initial setup was done in GroundControl, then the ini file was imported to WebControl. My frame is a bit smaller than standard due to space issues. The details are at the end of this post.

I should also note that at one point I had it working correctly, except that it was obviously a bit off on the calibration, since my cuts were not lining up exactly. Which is when I decided to recalibrate, and ran into this problem. 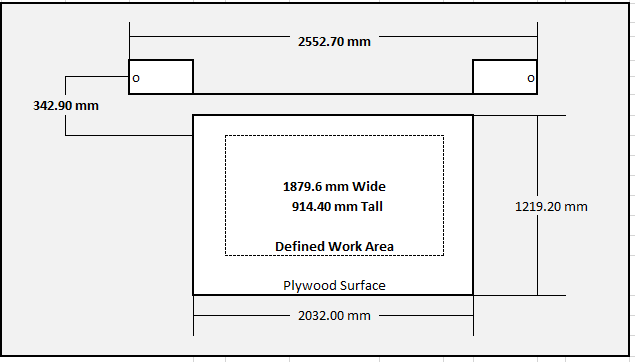 Any help is greatly appreciated. This is my third week of trying to get this right, and my wife really wants me to be working on other things! Does anyone have statics on Maslow related divorce? haha
Ed

can you reset your chains and try to recalibrate? That might put the center back where it should be. The drifting is not something I’ve ever seen before.

when you do the holey triangular calibration, it’s not uncommon to find that some of the holes are out of square (that’s what the calibration is there to correct

And if you run calibration multiple times, it should end up cutting in slightly different places, getting closer to perfect each time (and reports are that diminishing returns kick in after 2-3 calibrations.

If the calibration holes are getting worse over time, I would say that either you are having the chain skip, or you have a really inaccurate tape measure that is giving incorrect numbers.

reset the chains and clear calibration to start again, and try a different tape measure (if you can, find one that is certified class 1 or class 2 for accuracy, they aren’t as cheap, but you should be able to find a class 2 for ~$10)

I think the chain must have skipped. I started over again and that problem went away. It is still not calibrated correctly, as my circles are ovals. I will investigate further. It must have something to do with the motor offset. Maybe. ANYway… thanks for the input.

the more accurate you can be with the motor-shaft-to-workpiece-height (Y offset/beam height) and your motor to motor spacing (from 8:00 on left sprocket to 4:00 on right sprocket), the more accurate things will be. Remember you are trying to tell or get the machine to learn its location more precisely. 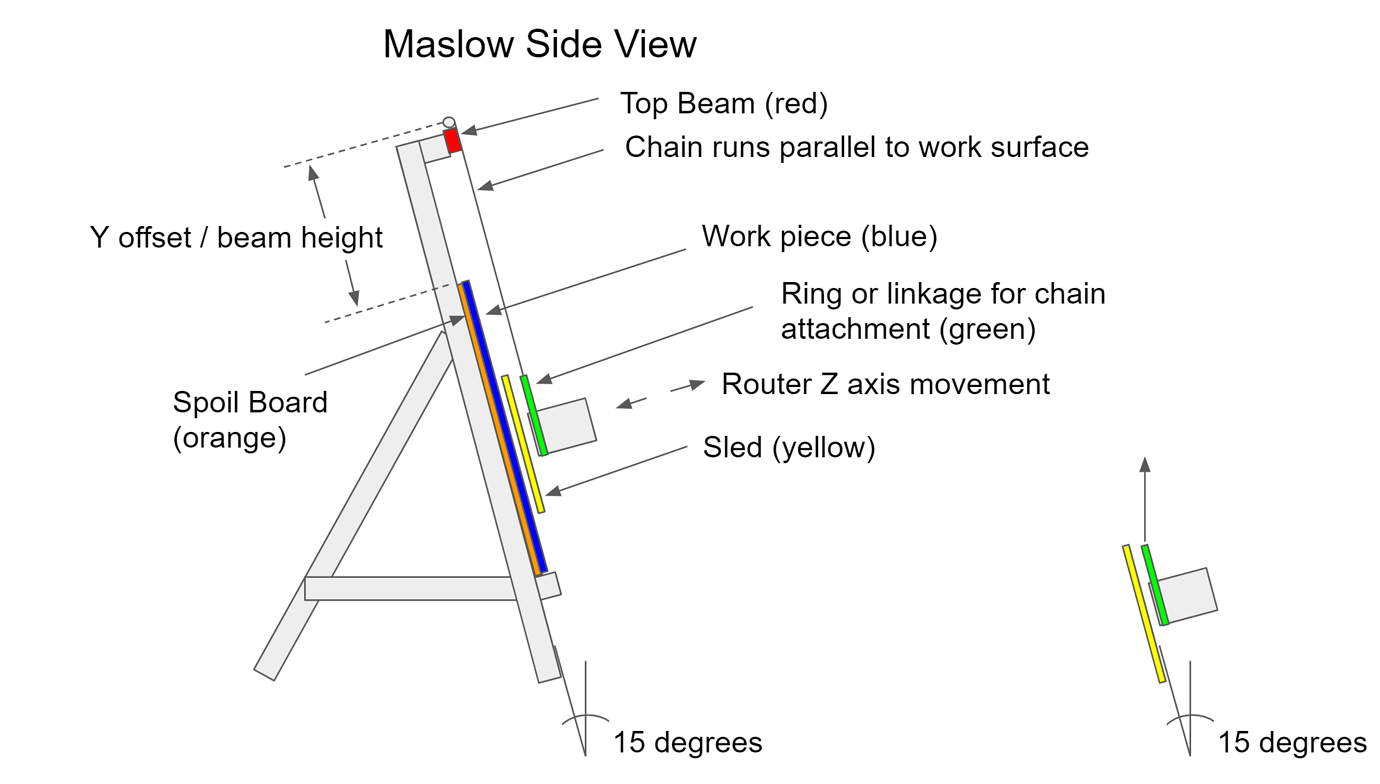 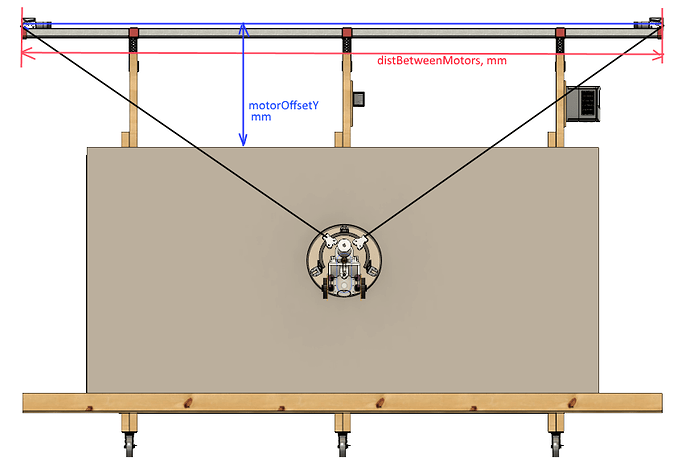 Thank you very much for the help. I wish I had found Orob’s diagram early on, as it would have answered some things I learned the hard way. So far, I have spent most of my time shooting myself in the foot by entering wrong dimensions, or some other foolishness. I blame the heat! haha

Ok…Having spent some time on the Wiki trying to learn the theory behind the calibration steps, I think I have a better handle on things. Yet, I my circles are still ovals. I just noticed something that may, or may not, be causing me problems. I was hoping someone could offer an opinion.

My ~final sled had some issues when I cut it, but I did not think it would matter so I slapped it together as I wanted to get started making some cool stuff. I just noticed that my router is mounted about an inch low of the center (see diagram). Now that I understand how critical the chain to bit measurements are, it seems like this could be causing me some issues.

Is having the bit too low on the sled a problem I should address? 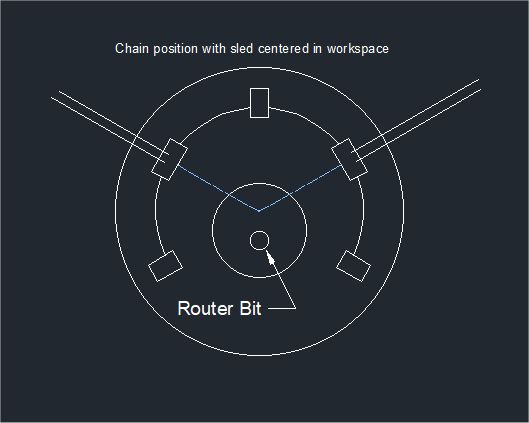 It was kind of you to blame the tape measure. I am afraid that in my case, the blame for poor measurements lie with the guy holding the tape. In my defense, it is dang hard to measure those marks accurately without a helper, especially with sweat running into the eyes! Thanks for your input!

Many thanks. I can’t believe it took me this long to notice…or at least to realize it was a problem.

I think it’s safe to say that all of us have had some issues of one type or another when we first started out. I had similar problems, it’s part of the learning curve, my wife would make fun of me all of the time because of the amount of time I sent “tinkering”.
I also started out with the EastBay kit, it worked fine for learning but I soon realized that I would need to build a more ridged frame with a longer boom to get the accuracy that I wanted. The EastBay frame just had too much slop and flex in it’s design. I would recommend that once you are comfortable with how the rig works, and you’re getting some quality cuts that you upgrade your frame.