Error message when updated to 1.11

I just updated GC and firmware to 1.11 and I get an error message. Can someone help me out? I’m sure it’s something dumb I’m doing or not doing! Thanks in advance! 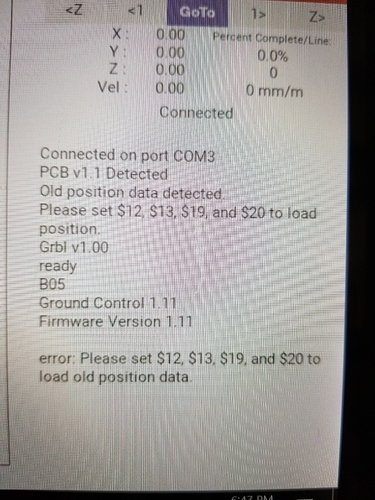 You’re not doing anything wrong! The notice means to say that
“much has changed since the version of firmware that was previously run on this Maslow, and you will probably need to run the ‘Set Chain Length’ step to take advantage of those changes”
Can’t tell what version was loaded previously, but v1.11 if the one you want to be using. You don’t need to re-run all the calibration steps if you’ve already done them.

Yeah it’s been awhile since my last update…cough 1.8 cough… Lol. I obviously didn’t know what I was doing so I started the calibration process and the motors wouldn’t turn so I couldn’t set the sprockets to 0. Any advice to get the motors to move?

Once you set the sprockets to 0, the next step is to hang the first link of the chain from the top tooth and extend the chains. Have you changed your frame since 1.08? Do you have the slack part of the chains hanging down? If so, you want to be sure that you’re set for " chains to the sled over the top of the sprocket "

My frame is the original frame design. I can’t set the sprockets to 0 because the motors will not turn. Can you think of what might be keeping the motors from moving? They are not even making a sound like they are trying to move. When I press the controls to move the sled nothing happens. This was never an issue before.

It might be necessary to ‘wipe the EEPROM’. Find that under ‘Actions/Advanced’. Then quit GC and open it again. Your settings in GroundControl.ini will be preserved.

actually you may, there are changesto the calibration over time and unless you
re-run the full calbration you will not be as accurate. It depends on what the
prior version was and what the calibration of that version took into account.

Not every version upgrade is going to give this warning, so when it does, I
would pay attention.

Happened to me, it definitely means you have to clear the eeprom on the arduino, https://www.arduino.cc/en/Tutorial/EEPROMClear after that re input the firmware and it works

Clearing the eeprom did the trick! Thanks for the help everyone!!