Harley plaque for a Harley guy! 😎

Here’s the first real piece I’ve turned out without issues. Pretty proud of it. I’m gonna epoxy fill the openings, white around the Harley Davidson and in Lewis and orange in the rest. Then add a chrome welting around the perimeter. Just waiting on pigments to arrive. Not sure why it didn’t cut the holes in the one A and just a spot on the other. Thinking they were too small for the 1/8" bit. I am going to route them by hand before epoxy and break the connections between the few letters by hand.
Thanks for looking and any critiquing is appreciated. Please excuse the piece of paper towel caught in the L. 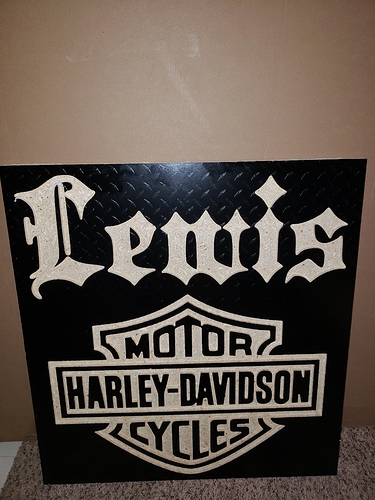 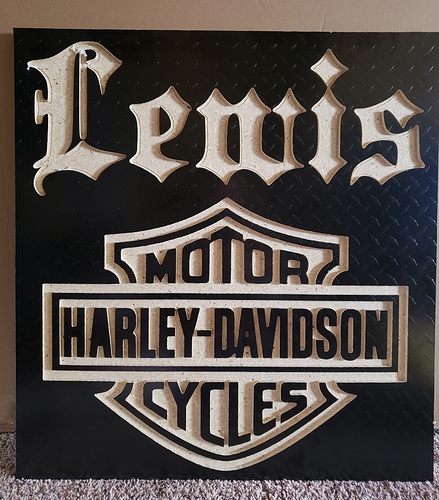 Looks great, how did you get the metal look to your black?

It’s a piece of Black Melamine diamond plate I had left over from a garage remodel I did awhile back. It’s basically a laminate like a counter top. Was special ordered and ran 4 foot up walls around garage, then drywall rest of the way to ceiling.

Hi Scott, Jim here, long time lurker, first time poster. Waiting on sprockets for my Maslow order to be shipped. I used to be an embroiderer and vinyl sign guy and I need to let you know a few facts about company logo’s (especially Harley). Being from western South Dakota, Harley is a HUGE thing around here due to the Sturgis motorcycle rally and they take their logo license very seriously. Do NOT advertise their logo’s for sale. Now a Harley dealership owner or main manager can order from you and provide you with a onetime implied license to provide them with their logo on a work piece. The consequence of them discovering you selling their logo on items to the general public without paying them for a license, best case is they contact you and tell you to stop or buy a license, worst case is them come in and take your equipment and everything associated with creating the product ie: your Maslow, router, any other tools in the area, the vehicle you used to transport the material, and the building the product was created in (house with attached garage for example). The example that was given during an embroidery seminar was of a grandmother created some cute childrens caps with the Harley logo and sold them to her daughters friend to give to the kids coming to a Harley themed birthday party for a 6 year old. One of the children attending parents worked for Harley. There was some discussion back and forth in which the grandmother basically said she could sew what she wanted and sell it if she wanted because she was not a “factory”. Some time later she was living with her daughter due to Harley took her embroidery machine, house, and car. She also couldn’t afford to rent a home due to the several hundred thousands of dollars of legal fees. Oh, and Disney is even harsher with their legal teams.

Now some companies don’t seem to care and may just look at it as advertising for them but both Harley and Disney look at license products as a major source of income for them and will come down hard.

Sorry to be such downer. Your project looks great. You said the center of the A might be too small for a 1/8 bit but it did the other one okay? One possibility could be a missed tool path in the cam program? I think a Dremel would be easier to fix it with than your actual router.

And in regards to the 1/8 bit, did you do the entire project with the 1/8 bit? Or did you program in a tool change? How many passes did it take and how long?

Thanks for letting me reply to your post with something I actually had some knowledge of.
Jim

I’m not offering it for sale. Lol I did it with a 1/4" bit and came back with an 1/8" for clean up around edges and smoothing tooling marks. I did it in 3 paths and 4th for cleanup. Took about 7 hours total. Both A’s were included in the path. The one just basically drilled a hole at bottom because that was the only spot that was wider than an 1/8. The other must be narrower than an 1/8, that’s why it was omitted. If I ever run off another, I will make a path for an 1/16" bit for the hole in A’s. I have a mini router with a clear base that works great for touch up work. I will clamp a guide to project when cutting the part between letters. That’s the part that stumped me, why that didn’t cut. The T on motor is supposed to be connected, but the letters in Davidson are not. I was gonna make a gcode to clean that up but didn’t wanna take a chance at messing up project as I’ve not had a lot of luck with my maslow and GC. Seems to be glitches in the programs or something. I thought I had it figured out and tried cutting a different project after this one, and it cut another semi circle right in middle of the project, when it was almost complete again. I’ve cut one good item out of 7 now with my maslow. And can’t seem to get anywhere with help on it. It’s about to become a dust collector. Very frustrating when it does it after 6 to 8 hours when a project is almost to completion!

Anyways, thanks for your comment and hope you have good luck with your Maslow.
Scott

I’ve got a relative who is a copyright attorney.
A company can not confiscate your property to prevent you from using their logo.

Even if they jumped to the nuclear option immediately (which is INCREDIBLY RARE AND UNLIKELY). Seeking both a civil suit and criminal charges a judge can only give monetary Restitution to the company of somewhere between $200 to $150,000 per piece (most items fall under the minimum $200 unless they can make a case that somehow you were making MORE THAN THAT) . Additionally they may be awarded restitution of a portion of their legal fees.

The state doesn’t generally recommend criminal charges unless malicious intent can be proven.
And most attorneys don’t want the bad press of screwing over the little guy.

Also most judges recommend arbitration before it ever reaches a courtroom.

With that being said yes its illegal and you still shouldn’t do it.

Hey Bob, thanks for clarifying that for us (your info is much more reliable) I think the speaker at the seminar was just trying to put the fear of God in us (or worse, the fear of big corporations).

I do have one more question for you.

Do you have a parrot?

For the last time guys, I’m not selling it, I made it for myself and I’m really not worried about copyright infringement! Lol wow I’m sure they have an eye out for me and gonna take my whole life away and imprison me for making a plaque. Geezzzzz would you like me to take it down for you and burn it??

Yeah, the risk of forums I’m afraid. This is a good group of people; unlike reddit or similar sites, there’s no way to rank answers and replies to sort out the noise. Sometimes people just want to talk about what they know (think they know), rather than what is immediately helpful to the OP.

Great job on your project BTW. You do really great work!

@Jacob thanks bud. I’m not trying to be rude , but damn. Lol I guess trying to throw a scare in me or something. I’m sure the copyright police monitor this group daily!

@scottscnc I was actually pointing out the other guy was exaggerating the worst case scenario and likely made up the story about the grandmother.
I was being specific in order to show I know what I’m talking about.
I was not in any way shape or form attempting to chide you for your project.
I am additionally familiar with copyright law because I make custom commissioned “laser swords” which are legally distinct from a brand name and copyrighted item previously owned by a company that rhymes with “mucasfilm” and is the current property of a company that rhymes with “bisney.”
@DakotaJim I don’t own a parrot. I do however have first hand in depth knowledge of the copyright process as well as an attorney (whom I’m lucky enough to have a blood relation too) that deals with these issues literally all day every day.

Unfortunately I’m fresh out of made up overly exaggerated stories on the subject without any basis of reality.
I can tell you even if I did have one of those I wouldn’t throw it up in on an internet forum in an attempt to scare people away from their totally legal (and might I say quite impressive) personal projects.
Have a great day guys.

@Bobthepir8 I wasn’t trying to be rude as I stated above. Thanks for the compliment. Just didn’t think posting a pic of my project would cause an issue about copyright infringement. I could see if I was mass producing them and advertising them for sale, but I’m not and never stated I was too begin with. Again sorry if I offended you!

@scottscnc I am sorry if I caused you any concern. I was just relating what I had been told years ago at an embroidery seminar. Your sign is fantastic looking and I am hoping I can make something as nice looking.

@Bobthepir8 I am sorry you felt I was being over dramatic but as I stated I was relating what I was told years ago. I was actually deferring to your better base of knowledge due to your more frequent interaction with professionals in the field of copyright law. I am also sorry about trying to make a parrot/pirate joke.

Once again I would like to apologize to everyone in this thread for anything I have said or done.

ohhhhhh! I’m sorry. I thought you were calling me a parrot because I was parroting something you had heard from a conference.

The pirate parrot joke connection went over my head. I can be a little dense.

I think this is one of those things where had we been in the same room together nonverbal cues would have clued me in to the fact you were joking. That’s not really an excuse for my behavior however.

I really sincerely apologize for over reacting, getting super defensive, and responding with a wall of unnecessary text. (my defensive response is what was unnecessary, this apology is totally necessary.)

@scottscnc you didn’t offend me. I’m sorry for my wall of text on your post. Your sign really is awesome.