I’m still trying to get the hang of a workflow, and I’m having some issues. Here’s what I’m doing:

Fusion 360 for dimensional drawing, which I’m exporting as a dxf
Convert the dxf to svg with dxfconverter.org
Open the svg in Inkscape to clean it up and combine paths
Open in makercam

If I open my svg in Makercam right after I convert it, it looks great, but I can’t do a profile cut because the direct export from Fusion 360 is a bunch of paths. So I select the entire inside and combine in Inkscape, and the same with the outside, but when I open that in Makercam, all I see is a single vertical line.

When I tried to upload my svg into the forum, I got an error “Sorry, but we couldn’t determine the size of the image. Maybe your image is corrupted?”, so here’s a link in my Google Drive: https://drive.google.com/open?id=1zzSGm5Zo4BlKgZjgm9bs7A0R_Fb35PA2

Just pulling on 2 nodes shows that this is asking for errors, double paths and not connected lines… 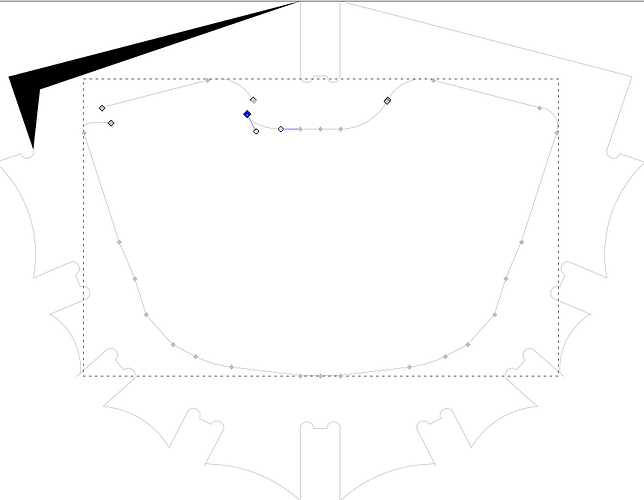 Why not g-code from the not within F360, or librecad → dxf to svg and them makercam, or freecad to g-code?

The g-code generated by Fusion 360 is going to be better than what makercam
produces, so skip the export/conversion/inkscape/makercam steps and just produce
the g-code within Fusion 360 (use the maslow post-processor)

I agree with what the others said here. If you’re already in Fusion 360, it seems like a lot of extra work to use Inkscape and Makercam. I can see starting with Inkscape (especially for complex patterns), and importing that to Fusion, but not the other way around. The machining functions are not as simplified as Makercam, but once you learn how to use them, you can see how powerful they are.

I’ve loaded the Maslow post and I have something ready to test, but one thing I can’t figure out is how to position the part on my sheet. I moved the part in F360, but the location of the G-Code output didn’t change.

No matter how I try to position my stock, my part is always in a strange place. 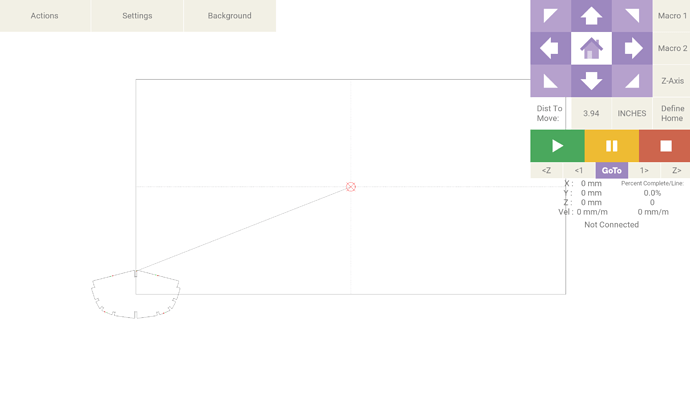 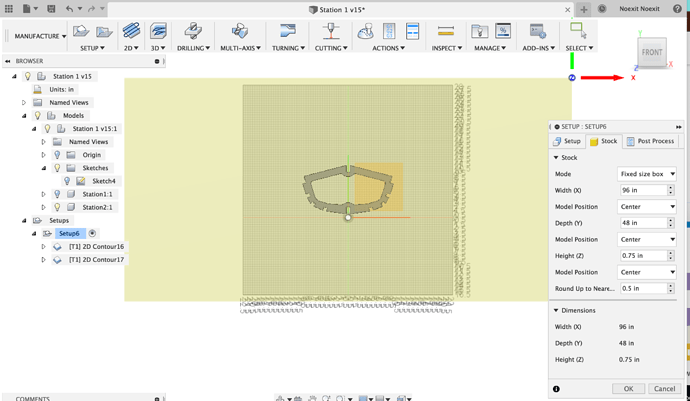 I gave up on trying to locate it on the plywood and just set the material to the width of the object, then manually positioned it in Ground Control. The first test, I forgot to select the whole object when I generated the gcode, but it cut pretty well. The only complaint so far is that the z-axis retracts at the end of every pass, and that’s the most time consuming thing. 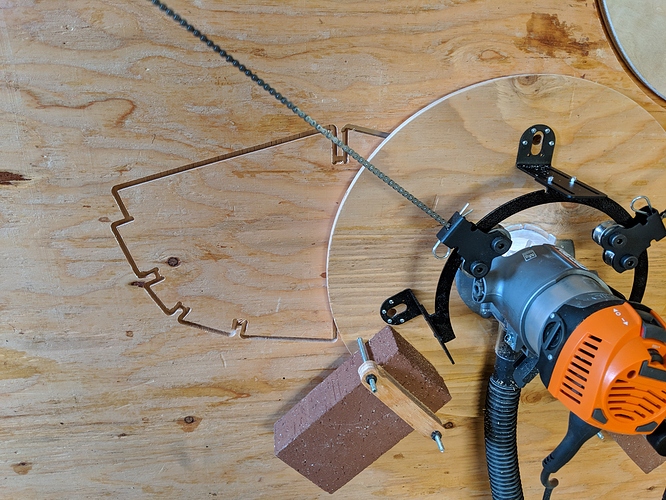 Yes. I was wondering if the retraction you speak of could be limited. So very time consuming.

Your origin is not anywhere near your model. When you import an SVG into Fusion, you need to move it to the origin after you import. You can find how-tos, just look them up.

Your origin is not anywhere near your model. When you import an SVG into Fusion

I see what you’re talking about though. It’s in the upper right, exactly where Ground Control thinks it is.

Yes. I was wondering if the retraction you speak of could be limited. So very time consuming.

I can limit how much it retracts, but I’ll have to play with it a bit more to see if I can get rid of it altogether.

I see what you’re talking about though. It’s in the upper right, exactly where Ground Control thinks it is.

If that is because this is part of a larger model, then you need to set the origin point in the manufacture settings in Fusion. You can set the origin in either or both places, and it will make centering your work much easier. Especially when you’re trying to fill up a sheet or board with parts, so as not to waste wood.

Right now it’s only one part, but there will be several once I finish drawing everything. I’m still refining my design on a single part before I draw everything up.

see if there’s a setting for ‘depth first’, if so, that will cut each path
multiple times down to the final depth. That may be smart enough to not retract
betweeen each pass

otherwise, it goes over each path once at each depth, retracting to the safe
height and moving to the next path rather than cutting deeper.

you can set what the safe height is (it’s usually pretty conservative, which
means moving the Z axis more than strictly needed)

I can limit how much it retracts, but I’ll have to play with it a bit more to see if I can get rid of it altogether.

Yes. I keep safety height at a minimum. I worded that funny. I’ve just watched so very much up and down when it seems unnecessary. Is there a possibility that someone could create a special kind of optimizer for this specific issue?

No matter how I try to position my stock, my part is always in a strange place.

See “Stock point” in the “Setup” tab. Then pick the center top point on the yellow stock box.
https://www.autodesk.com/products/fusion-360/blog/getting-started-introduction-to-cam-and-toolpaths/