Has anyone noticed any interferrance from wrapping the Z axis motor cord around the router power cord? I have not tried it yet, but wondering if inductance would be an issue? Might have to try it myself and report back? it would tidy up the cord management IMHO.

interferrance from wrapping the Z axis motor cord around the router power cord?

I think that kind of interference is the issue in thus from the GroundControl repository. I don’t think the cables were twisted together, just interference from the motor in this case. The short answer was - it caused a lot of trouble, but using shielded cable for the z axis helped a lot.

I have the power and z axis cables running side by side with a couple of cable ties, and have not had any z-axis problems. An extension cord and the z axis cable come up from behind and out on a small mast to keep the cords outboard of the router and worksurface. The router plug joins the extension cord on the mast, so it is easy to unplug the router while making bit changes, etc. 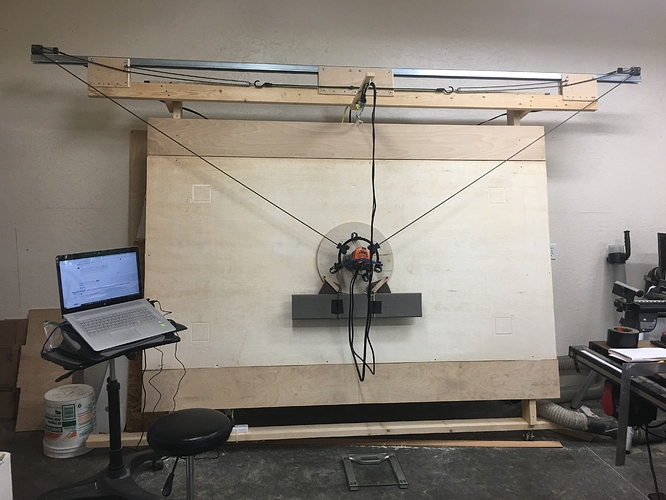 I’ve found the router to be very electronically noisy and suspected this Z axis cable was too close the the power cord. I designed these isolation rings 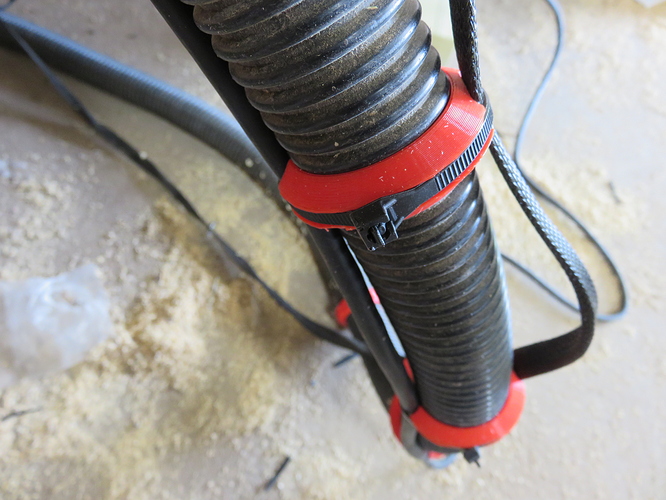 found this shielding /conductive slip over material. Not sure I really trust a plastic weave strap to shield well. Are there other metallic/copper/aluminum solutions? I googled and could not find.
http://www.cablemarkers.com/pdf/techflex/flexocon.pdf

That looks like a good solution, though using a cable with an internal shield might be cheaper and easier to attach ground to. The shielded cables are less flexible than the bundled individual wires, though.

I’m upgrading the motor cables in our kits to use shielded wires. Should I also add ferrite cores to both ends?

I would test with the ferrite before adding them to all the cables. The signals from the encoders can be pretty high frequency and so the ferrite could potentially block some of the encoder signal in addition to the noise. My hunch is that won’t be an issue, but still worth checking

I agree with @bar on this. The shielding shouldn’t need testing, but the ferrites would.

What would be best way to test without access to a scope or knowing how to use a scope lol?

Maybe someone in the group has a scope and could test?

You should be able to test by just using the machine normally. If you are loosing encoder pulses the position will drift over time and with each pass the machine wouldn’t come back to cut in the same place

I’ve run a bench test using a stock Maslow z motor, with and without a ferrite on the encoder conductors. The bench test lets me run the motor for 100 revolutions and check the angular offset error. The ferrite caused no inaccuracy, the end position is the same with or without the ferrites. It looks to me like they would not cause trouble.

Thank you! That was very fast feedback!

If you’re using shielded cables you should read up on how to properly ground them, then check out ground loops for extra credit. It’s not as easy as you think! Bites a lot of people, including commercial vendors. The cheap eBay machines are known for grounding issues.

Don’t rely on the moose memory, but as I recall you only connect the ground at the controller, not machine, end. Again, double check.

We’re talking about signal grounds, the ones you use with electronics. Power safety grounds, like that green wire in electrical cords, are separate and always end to end, and there are techniques for connecting them iirc. They are there to keep you from lighting yourself up, nothing to do with signal noise (maybe in an industrial setting, computer room electricians were pretty careful about them when I worked inside the glass fishbowls, but that’s not diy and we don’t deal in the multi-million $$ machines). Don’t remember if the Ridgid has a safety ground ottomh, perhaps one would be good for a metal Maslow?

And one more correction from Dr. Giggle. There’s power, signal, and earth grounds, should have used the term shield, not signal, ground above. As you see, a complicated subject. Just giggled “connecting signal and power grounds”, shield (or shielding) grounds next.

Nearly 50 years since I studied this stuff, back when sly drool was my constant companion and we used an old mining era (late 1800s/early 1900s) 100hp motor generator and a bank of 100w light bulbs (incandescent, no wimpy cfl or led bulbs then, really 100w with a big turn on inrush) in the motor lab. The hum of real power, the dimming of overhead lights, just needed a few jacobs ladders and manical laughing for the true horror of the next snap quiz

The plan is to have an extra four inches of braided shielding from all 3 motor cables connected together at arduino and tied into the green ground wire of a “dummy” power cord that ties into your shop ground. There will be a ferrite core on each cable end closest to the 3motors.

If there is a better way please let me know

Ditto that, I’ve done it the same way, no issues with z-axis operation.