Makerverse no z axis movement at all

I cannot zero the z-axis it will not move at all I cannot raise it cannot lower it the motors just make a humming noise and just sit there running the newest holey 51.28 or something like that firmware just have the regular motor on the z-axis like you would do with a rigid but I have the Ryobi router so that doesn’t matter at all. Everything worked before I switched over. And I switched to makerverse so I could have actual possible use of the outer edges of the stock. And my z-axis ran perfectly fine on GC now I go to makerverse and now the darn thing doesn’t work at all. My x and y-axis run perfectly fine. What do I need to do to get my z-axis to move cuz it’s not moving up or down at all. I have the mega 2560 board running Windows 10 connection through USB this is the newest maker verse that is supposedly backwards compatible with the older Maslow’s but I just ordered this thing through maker made a couple months ago. I mean literally the thing is sitting here and I’m losing money I had a landscaping company for 11 years until covid-19 came around and then I lost all my customers so now I run a custom woodworking business with my Maslow it’s not the fastest production thing in the world but it pays my bills. I just need to get my z-axis working again cuz that’s the only thing that is not working literally I pressed up or down on the z-axis through maker verse and everything is installed correctly to the best of my knowledge. Literally there is no movement of the z-axis at all all plugins I’ve unplugged and plugged them back in to see if that might correct my problem but nope no matter what I do I cannot get z-axis movement .

Are you saying it quit after installing new software? What happens if you go back to what you were using before?

the internal shaft on the motor was binding the gears up . i ordered a new one. im gonna put the inner parts(gears) in my ultrasonic cleaner , re grease the gears and go from there. will update later

I have recently installed and tried to calibrate with Makerverse 1.1.2 and the z-axis quit working once in the app. It would actually move the sled down the first time I tried to move the z-axis…first movement only, then it would just make the hum sound and no movements. It was working just fine in Ground Control. I was getting a flag saying I needed Firmware 51.28, so I installed the latest firmware, no luck. So I tried a few different versions of the firmware, no luck. I installed Makerverse 1.0.6 and still no luck. When I go back to Ground Control I have full z-axis movements and have run another calibration and it was spot on. I would like to try Makerverse but not sure what is wrong.

did you trigger the softlimit?

where do you see soft limits? I’m in the the exact same situation as trojanowich. 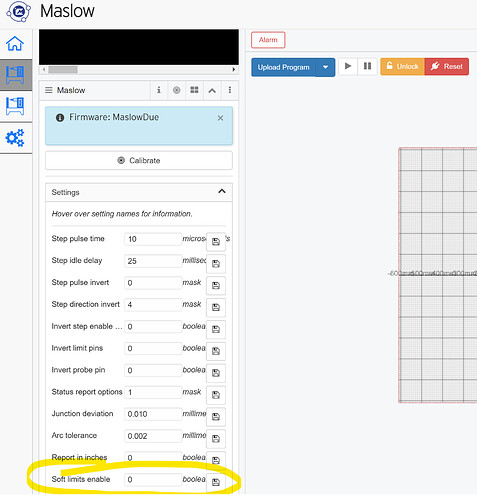 to reenable them after you get things moved back within limits and zeroed:

Caution: if you have soft limits disabled all the time, the sled can drive off the left, right, top, or bottom of the spoil board and the z axis has no limits, so self-assured destruction is a possibility. Please be careful.

I have a first gen maslow with the Arduino Mega. The only way I could figure out to send a command like $20=0 to the Arduino was to make a custom button. Seems to have worked as I got an OK back (screen shots). 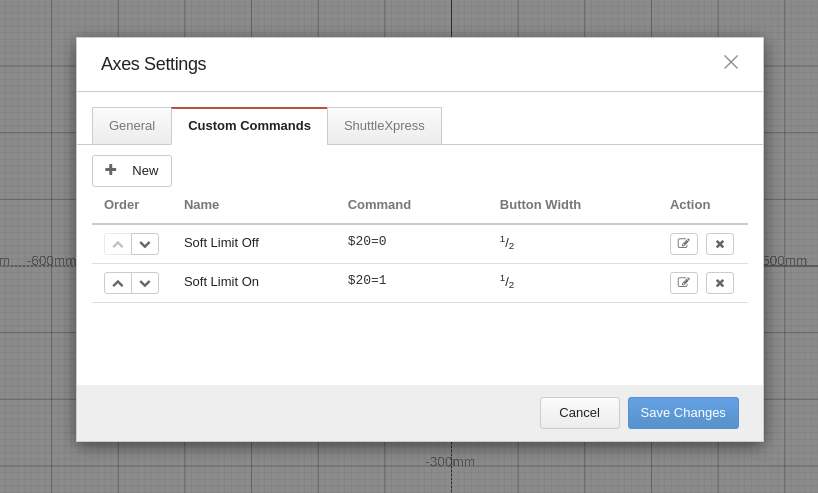 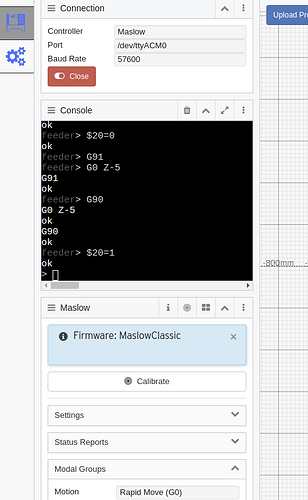 ok. I’m sorry. The soft limits do not apply to the mega gen 1 systems, which is why it is not shown in your settings list. I reread your first post and 51.28 is the mega. Makerverse 1.1.2 is the only version that works with both the mega and the due. 1.0.6 was made for the Due, which is why it did not work. Sounds like your z axis setting is incorrect. In the calibration, you can adjust the movement numbers for the z axis. You may need to adjust those. I’ve not done a full calibration for the mega in makerverse, only the Due. I had planned to, but I have the metal maslow with the different z motor and have not yet tuned it with a mega, so the best i can do is point you in that direction and hope you figure it out.

On this screen when I click move up or move down the whole sled moves down, in the Y axis. So what is my next step? 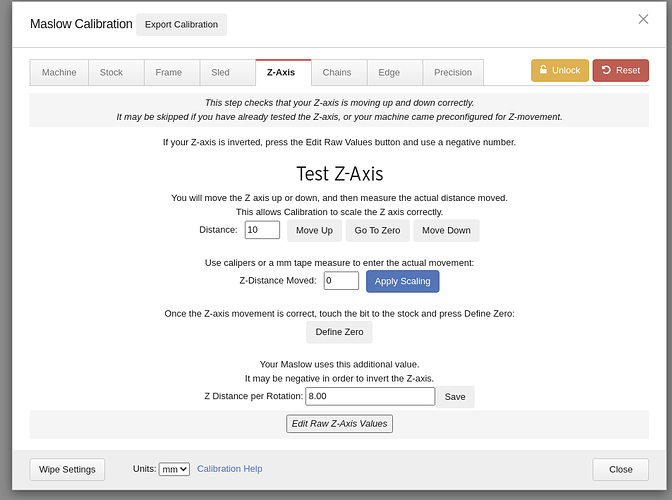 have you tried the wipe settings button in the lower left to start with? If the wrong motors are moving, is the shield plugged in completely and the motors connected to the outer plugs M1 and M3 with the z axis connected to M2?

regarding everything pluged in. I just verified, but everything was working before on groundcontrol. now on makerverse z axis not working. everytime I try to move the Z axis i get an alarm:3

For anyone following, Orob and I have been working one on one, and have gotten makerverse working with the latest firmware (Newer than Holey 51.28), compiled from source.

Makerverse is now working with my original Maslow.

Just took motor and gearbox off. Looks like the gearbox is frozen.

Took gear box off of motor. motor turns in both directions but have to use resrt to stop. Do I need new motor and gear box?
Thoughts?

It sounds like you need a new z-axis motor. If you get in touch with @makermade they will probably be able to send you one.

Thanks I have a new one on order! The gear box was good when I took it off and then took it apart to check the motor. I could easily stop the motor by pinching it with my fingers and when I put everything back together it vibrated When I used the Z axis. I tried both ground control and Makerverse and in Makerverse I had to use reset to stop the vibration and in GroundControl it would stop on its own as if it had completed the task. Think that is strange.
Anyway thanks for confirming my suspicions!

So we bought a malsow a couple of years back and needed it for a big job. we switched to an XCarve for our daily driver but kept this around for large signage.

so I just got a big job and it seems that I’m joining the fun problems gang.

Updated to Makerverse because ground-control won’t launch on OS Monterey.

Symptoms: All motors Humm when z-axis is told to move, none of them actually move. X-Y motion (motors 1 and 3 work fine)

So updated to that custom firmware listed above for the mega board.
tried again with a New arduino mega: Good: passes looptests and all.

Get connected and calibrated machine: Done but no z movement
Removed the motor and gearbox, tested both motor and gears: motor runs in forward and reverse with a 12v dc supply. Gears spin freely.
Took out an oscilloscope and checked the encoders on the z motors: Good
Checked the Motor Shield for the mega: No burnt-out Mfets or anything: passes Visual inspection.

Ground control seems to be depreciated enough where I can’t go back at this point (on OSX to which my employer is tied to) nor do I want to set up an RPI because this is run in a maker space at a school so open/accessible machines connected to the LAN are a no go based off of the policy. (last time we connected it we had a couple of rambunctious students write a script to send an endless stream of phalicies to my printers)

Would love to get this machine back up and running soon.